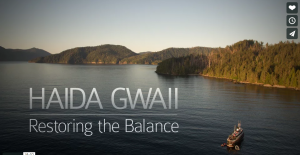 This is a link to a video called Haida Gwaii, Restoring the Balance. It was produced in partnership with the Council of the Haida Nation, and discusses the environmental and land claim issues of the Haida people, including the historic blockade at Lyell Island, which eventually led to the creation of Gwaii Haanas park. This is an example of exceedingly well done social media marketing; I first came across this video through Facebook, which linked me to Vimeo. The cinematography is incredible using high definition video, flying drones, interviews and vintage footage from the CBC archives. This video could be used to show to students giving them the perspective of the Haida people and as a launching point for further investigation into First Nations issues.