Social media has created a tool for Indigenous people all over the world to organize politically that span both time and location.  The Idle No More movement has been one of Canada’s most successful political movements ever to spotlight the political issues Indigenous Canadians face.

Idle No More was created by 5 Cree women who vowed enough was enough when it came to the Canadian government threatening to pass omnibus bills that would decrease pollution protection for Canada’s lakes and rivers, ignoring historic treaty promises, and dragging their heels when it comes to missing and murdered Aboriginal females.

Technology like Twitter. FaceBook, and Internet allowed this small group to organize and expand their political voices.  This newspaper article from the Toronto Star traces how social media can be harnessed for maximum political power.

Here are some key quotes:

“Social media allows the people who are actually directly involved and impacted by these kinds of              movements . . . to have their voices heard.”

This article can be used in the classroom to start investigating how social media is really changing the face of political protests and giving voice to people who in older days were silenced, ignored and oppressed.

Here is the link: 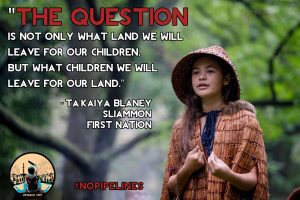