For the assignment this week I picked pages 130-143. During these pages the primary focus is on Latisha, as she deals with four American tourists named Jeannette, Nelson, Rosemarie, and Bruce. The section also dips into the past, explaining how Latisha met her husband, George Morningstar, and ends with a quick meeting between Eli Stands Alone and Sifton, the dam planner.

To begin elucidating the references King (probably) made in the writing of these scenes, I will start with George Morningstar. 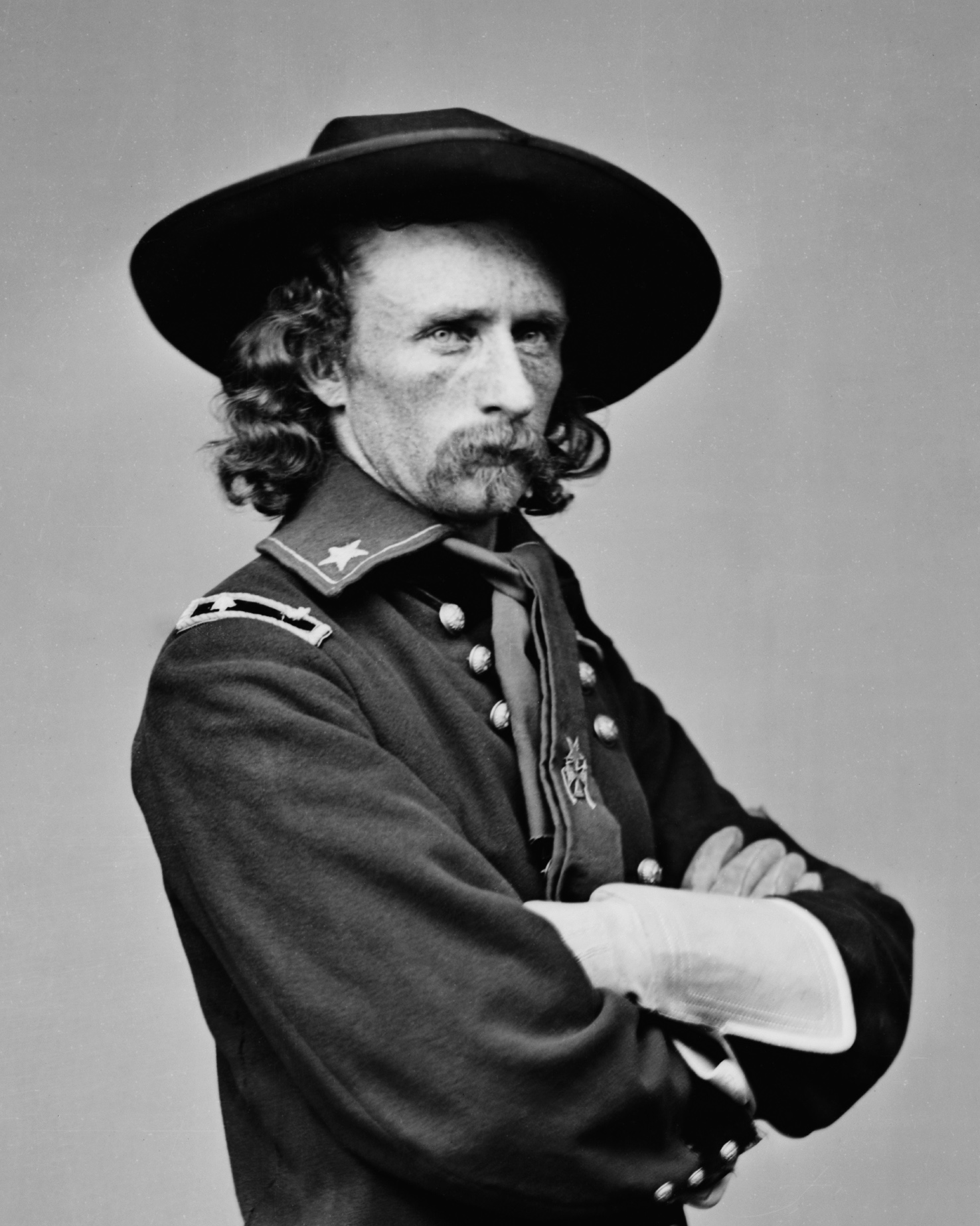 In the appendix of Green Grass, Running Water Jane Flick links George Morningstar with General Custer, a Civil War general (20). Now, I am unfamiliar with General Custer, but the name sounds familiar — like Uncle Sam, or Captain America. In GGRW George is described as having “soft light brown hair that just touched his shoulders” (132); pictures of General Custer corroborate King’s description, as does Custer’s youth, seeming uselessness, and yet all-over charisma. Consider this description from biography.com:

“But Custer had greater ambitions than being a grammar school teacher and soon set his sights on the military academy at West Point. While he lacked the qualifications that many of the other candidates had, his confidence eventually won over a local congressman, and with his recommendation, in 1857 Custer was enrolled at the school” (n.p).

And compare it to Latisha reminiscence of her first few months with George:

“At the end of the day, he [George] was still there, watching, listening, looking for all the world like the most intelligent man in the universe… ” (132).

Yet General Custer was not a spectacular general, and though he himself escaped many scrapes, his men “suffer[ed] disproportionately high casualties during the [Civil] war” (biography.com, n.p.). Compare this again to Latisha, who realized early in her marriage to George that he “wondered so much about the world was because he didn’t have a clue about life” (132, 134).

General Custer was eventually killed, along with 210 of his men, at the Battle of Little Bighorn, due much in part to Custer’s inability to await orders.

Jane Flick connects the diner goers (Jeannette, Nelson, Bruce, and Rosemarie) to “figures [who] have been active in the stereotyping of Canadian Indians and Canadian life in the North or West” (25). Flick links Jeannette and Nelson, in particular, to actors “Jeannette MacDonald and Nelson Eddy [who] starred in Rose Marie (1936), a Hollywood musical romance about life in Canada’s north” (25). At one point in the diner scene Rosemarie tells Latisha that she was once an opera singer, and Nelson sings “When I’m calling you, oo-oo-oo, oo-oo-oo!” (133). Flick notes that this song appears in Rose Marie as the “Indian Love Call” (26). Of course, because the internet is fantastic, I found the song on YouTube, and place it hear for your viewing (listening?) pleasure (the video patches together all instances of the song in the movie):

Nelson (the diner-goer) says quite mournfully that his childhood dog was named Tecumseh (bear in mind that he’s eating at the Dead Dog Café, where Latisha insists straight-faced that the meat they serve is dog) (132). Nelson says that his dog was named about Tecumseh the Indian chief, and Flick notes that there was a “Shawnee Chief… noted for his courage and sagacity” (26) named Tecumseh. But when I was on biography.com researching General Custer, a prompter at the bottom showed me General William Tecumseh Sherman.

General Sherman was the hard-hitter in the American Civil War — his army’s battles against the Confederate south were known as “Sherman’s March, in which he and his troops laid waste to the South” (biography.com, n.p.). On the biography.com site the editors speculate that Sherman’s middle name came from his father, who “admired the Shawnee chief” (n.p.) Flick mentioned.

There is perhaps a correlation here between naming a man who “believ[ed] the Native Americans were an impediment to progress… [and] ordered total destruction of the warring tribes” (biography.com, n.p.) after a famous Native American chief, and naming a dog after a famous Native American chief. Both usages of the name disparage the original person — Sherman by his actions, the dog by way of insult. King may be hinting at the appropriation of names, used to shock or to portray oneself as exotic. In GGRW, Charlie’s Dad Portland makes a mockery of this process by taking a more “Indian” name for his stage name, despite being Native American and already having, not only an “Indian” name, but a name of his own:

“After the fourth year of playing minor roles, C.B. Cologne, a red-headed Italian who played some of the Indian leads… told Portland he should think about changing his name to something more dramatic. Portland and Lillian sat around one night with C.B. and his wife, Isabella, and drank wine and tried to think of the most absurd name they could imagine. ‘Iron Eyes Screeching Eagle'” (151).

This taking of names also links to General Custer, who was given the name “Son of the Morning Star… by the Arikaras in Dakota territory” and who liked to be known as such (Flick, 20). King could be alluding to the practice of taking only what one liked from the Native American way of life, and discarding or obliterating the rest — names, ways of dress (Custer was famous for wearing a fringed leather jacket (Flick, 39)), the stereotypes that go over so well in films, particularly Westerns, were all adopted by the European settlers (and continue to be so — headdresses at Coachella, anyone?). But anything that didn’t fit in — polytheistic myths, language, cultural ceremonies, land usage — was cast aside.

Finally, the conversation between Sifton and Eli Stands Alone. Flick notes that the dam project in Quebec to which Sifton alludes as his lost career opportunity is a stand-in for the “James Bay project, the monumental hydroelectric-power development on the east coast of James Bay… it was contested by the Cree, who had not been consulted… The Cree settled for $225 m. and retained hunting and fishing rights” (26). I found an article online detailing the process of creating the James Bay dam (a dam included in the wider Great Whale development), and the evidence given in court by Alan Penn about the social and cultural effect of the dam foreshadows what King no doubt is hinting would happen to Blossom, Alberta, if Eli Stands Alone moved aside:

“The distribution of hunting territories, an essential cultural feature of Cree society, has been challenged by the 11,000 square kms of flooding, and by the emerging network of roads….  La Grande river, especially above the first rapids, is heavily contaminated [with mercury]… Many families…decide simply to avoid fish altogether. This is particularly obvious in the case of women of child-bearing age. This group is generally only exposed to very low levels of methyl mercury. But this is because women have stopped eating fish. Given what we know about the role of fish in nutrition during pregnancy in the north, we must wonder what the larger public health implications of these dietary shifts really are” (Grand Council of the Crees, n.p.).

Which brings me to Eli, and Sifton. Eli, Flick notes, is most likely based on “Elijah Harper… [who] voted against a debate that did not allow full consultation with the First Nations” (24). The correlation between Eli and Elijah Harper could be that they stood completely alone in the face of opposition — Eli, against the dam, and Elijah Harper, as the only person to vote no in the “Meech Lake Constitutional Accord in 1990” (Flick, 24).

Sifton Flick connects to a Sir Clifford Sifton, an “[a]ggressive promoter of settlement in the West… and a champion of the settlers who displaced the Native population” (Flick, 24). In the article about the James Bay Project Alan Penn noted that to create the dam “required the relocation of one of the largest subsistence-oriented native communities in northern Canada” (Grand Council of the Crees, n.p.). Sifton, as the head developer of the dam in Blossom, represents large corporations which require the relocation of Native settlements for their projects to commence, as well as the late 19th century British man who forced Native Americans out of their lands to make way for Western settlement.

I am sure there are many more references, but I will gratefully bow out now.