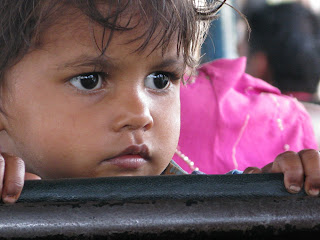 Anjuna beach was a nice reprieve. We stayed two nights at “Tantra” which resembled what you would imagine in Morocco where people are lounging on cushions with low tables sans hookah. I bought a loose linen shirt in the market for triple the norm ($6!?) just so the lady would leave me alone. She didn’t. I later bought loose harem style pants from the only man in town who let me look in peace. We ditched the shirt along with a huge pile of other stuff when we left, pack immediately felt lighter but already plotting what else to ditch.
We took a rickshaw to the city of Panagi (Panjim) then a bus to Margoa (Madgoan).  After realizing we missed the train to Hampi we stayed the night in Margoa at the relatively swank Hotel Tanish. And by swank I mean it had hot water. The LUXURY! (1200 Rs; $24)  We tried our first Indian sweets/baking which are basically pure sugar, perhaps deep fried. They’re not about subtlety here. After waking up early the next day we found there was no train. So we took a 6 hour bus which wound through the lush jungle mountains to Hubli, then waited a long time playing our ukes with no clear idea when the next bus would come. A guy from Japan and a girl from Spain were in the same boat. On a whim, we hopped on a bus to Koppal which took about 4 hours.
The roads are very bad, combined with a bus driver with no regard for human life and you frequently find yourself flying a foot in the air off your seat. Everything you heard about driving in India is true. I honestly don’t know why they bother painting lines on the road. Maybe they’re for the cows to abide them cause the drivers sure don’t. 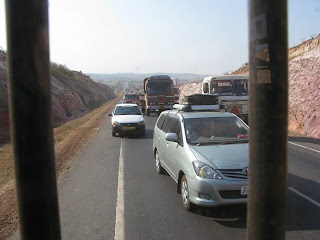 In Koppal we got a 1 hour bus to Hospet and finally took a rickshaw to Hampi, which looked surreal in the dark. Arriving around 11, we settled for our driver’s “friend’s” place (we knew he’d get commission) which had fluorescent green walls and an awful bug net that draped over and in your face. It was beyond groady but we were mostly just miffed that we paid too much (500 Rs; $10!) I slept horribly and in the morning vomited at least 10 times- you can thank my dad for requesting more avid description. I’m not sure how I got sick as the only substantial meal I had had was at a super posh restaurant with amazing view (buffet breakfast, 120 Rs; $2.50).
In any case Keegan brought me porridge. I miss porridge. I miss healthy raw vegetables and I could really go for kale or cold borscht.
Don’t get me wrong, Indian food is tantalizingly scrumptious, they definitely know their spices. Unfortunately for a celery muncher such as myself however, a typical Indian meal (acknowledging that cuisine varies greatly per region) comprises of vegetables overcooked past recognition in copious amounts of oil & butter which is usually eaten with a white bread such as “chapatti”- a tortilla. Delicious but heavy (particularly as a mildly wheat intolerant vegan). But what can you do.
We changed rooms to “Gopi” guest house which has a roof restaurant with a fantastic view. Hampi is surreal. Giant teetering boulders as far as the eye can see with amazingly opulent and detailed temples, monuments and structures cropping up everywhere. Strangely the 700 year old, 500,000 people civilization only lasted 100 years before a Muslim attack ended it permanently.
When I was feeling slightly better we walked a ways to the waterfalls. Nagi was our unrequested guide. People tend to announce rather than ask. Afterwards we cut through a banana plantation to the river and shared a coconut as the sun set. The river bank is lush with banana and palm trees and looks like a dreamy oasis. On the way back we got lost as the bugs were coming out, getting very muddy and later washing off in the river as the locals do.
It is very hot. I am continuously fantasizing about heading North early, before the whole country warms up. I did not think I would miss/appreciate home this much so quickly. It’s barely been a week. I am not necessarily home sick but definitely sick, and away from home. 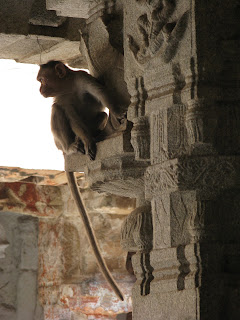