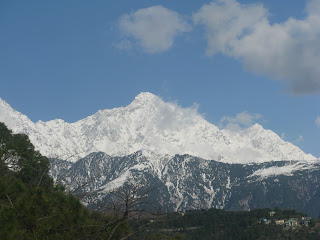 Last night I sat on a hill waiting for a tsunami.
Wait.
Hold the phone.
How the heck does a tsunami hit the Himalayas!?
Alas. It has been a while.
Last I blogged I was hanging out with Tibetan monks while Keegan was puking out his guts/ freezing his nose off/experiencing the unmatched hospitality of the war torn Kashmiri people.
But we’re not in Kansas anymore.
Or India for that matter…
BACKTRACK.
While I hopped a lovely 12 hour bus ride to Dehradun, in order to get to Rishikesh, Keegan, sick of being sick, cold and “nothing working in Gulmarg” (heat, electricity, water) and disappointed that he would be unable to ski the good terrain for some time since “the military ran out of explosives” and couldn’t do avalanche control, hopped on a plane (with a clear view of the Himalayan range- lucky bum) back to Delhi.
That was one sentence. English grammar is obviously becoming compromised.
I went to Rishikesh, of yoga fame, thanks mostly to the Beatles staying in an Ashram there in the 60’s. Sian (the Brit girl I was travelling with) and I stayed in the lovely “Swiss Cottage” on a hill overlooking the Ganges. Flower pots and wicker chairs made for a nice little oasis, albeit it was perhaps a little removed from the action. We took a yoga class, which ended up being just the two of us, in a white marble floored room, with a young instructor dressed all in white. He babbled on about inner peace and fire and seemed like a genuinely lovely (yes I’m saying lovely again) man though  later admitted she could barely make out a word and we weren’t quite positive if the massaging was a standard yogic practice… we had dinner that night in a stilt bamboo hut hanging over the Ganges.
The Ganges LOOKS clean.
It’s green. Good green, like a sandy tropical beach.
But I never forgot that it’s full of sewage and corpses. 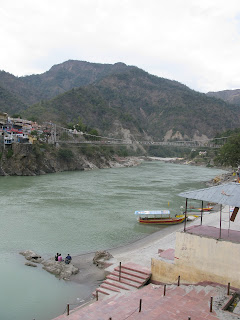 The next day, while booking our onward journey at the train station, we met Maria, a lovely (again!) older Belgian lady. She invited us back to her room- in an Ashram with a balcony overlooking the Ganges. She showed us around town, then Sian and I did another yoga class in an Ashram- this time with many other foreigners. Later we met up with Maria and did an evening meditation in a colourfully ornate (in colonial fashion)-if peeling room, with a holy man again dressed all in white but with a badass beard.
The meditation was… how shall I say… stereotypical?
Monotone chanting telling us to “go deeeeper into eeeemmmptinesss… fooocuss on the whiiiiite fiiiiire betweeeen your eyebroooows.”
I don’t think I’m meant to sit still that long.
Don’t get me wrong, I think mastering your emotions and calming your mind is a noble pursuit- but is there a meditation that involves getting up and running around the room every once and a while!?
Alas, I made it through the hour.
Later that night, and I mean LATE late, Sian and I decided to find the music we could hear wafting in our window. After crawling under a fence etc. we turned a corner to find 10 or so dreadlocked Israelis jamming on 4 guitars, a didgeridoo and a kuzoo, among other instruments. Everything from blues to the Pixies to Israeli folk to Pink Floyd (during which a Hare Krishna man with an orange towel draped on his head began singing and dancing.)
I woke up as early as 4 hours of sleep would permit and caught a 7 hour bus to Delhi, back to the Tibetan colony to find Keegan hiding from Indian food.
A few days later we flew the nest to Kuala Lumpur, Malaysia.
So there’s your answer, we are in Malaysia.
Kuala Lumpur first impressions:
CLEAN
FRIENDLY
MODERN
STARBUCKS
…mmm soy latte…
Let me repeat that: SOY latte. No arguing over “no milk, no sugar” as if it were blasphemous.
Second impressions:
AIR CONDITIONING
EFFICIENT NEW BUSSES
EFFICIENT NEW TRAINS
NO TRASH.
Keegan’s personal sneak attack side note: I CAN HEAR THE BIRDS!!!  back to Kristina…
Let me repeat that: after months of trash EVERYWHERE, it was no longer a culturally acceptable or EXPECTED practice to litter. 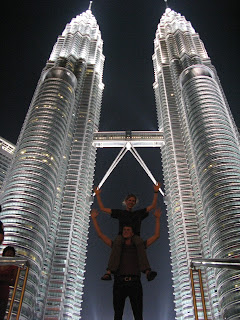 Kuala Lumpur itself is extremely modern, much like Singapore I’m told. With a HUGE metropolis shopping mall on EVERY corner (quite literally.) Gucci. Louis Vuitton. It’s all there. In unfathomable abundance. Strangely, India and extreme materialism almost appealed to us. It all seemed so luxurious. The cleanliness.
So we went to upscale grocery stores and loaded up on health food and revelled in (often overkill) air conditioning. We ate fresh fruit from street vendors and I chugged as many soy cappuccinos as I could muster. We even found and organic vegan restaurant. Yum.
Callum Gunn (for those who don’t know: Keegan’s friend who has been modelling in KL) acted as our tour guide and showed us the ropes of Malaysian street food (mmm durian…NAT). We also went to Batu Caves- a Hindu worship place. Basically gorgeous natural wonders lit up with Christmas lights and Disneyland esque figurines…. Roight. 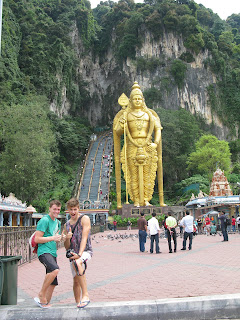 Callum also acted as our travel agent and sent us to the Perhentian Islands. Though not before going rock climbing at SE Asia’s largest climbing gym. RANDOM. And sweet!
So a 7 hour bus to Kuala Besut. But this ain’t no Indian WWII school bus. It had 1st class seats and roads that didn’t bump. And horns that honked less than every 4.6 seconds! Oh the luxury. Then a dingy ride in rough seas and monsoon rain. Might as well have swam.
Now would be a good time to mention the monsoon.  When it rains in Malaysia… IT POURS. I’ve never heard thunder so loud in my life. SO COOL. I invested in an umbrella in KL.
So we made it too the Perhentians. First to the larger Island of Besar because it was too rough to get to Kecil, but after a night we took a water taxi to Coral Bay on Kecil and walked to the backpacker enclave that is Long Beach.
For Callum’s sake, who cannot make the journey due to work, and for those stuck home in the cold, I am sorry for the next line.
THE BEACH IS SO FREAKING BEAUTIFUL AND THE WATER IS CRYSTAL CLEAR AND TURQOISE.
Yeah. Sorry. Turrets. Got that out of my system.
In all fairness though, the rough seas mean visibility for scuba is poor and we’re stuck relaxing on the beach. How annoying. 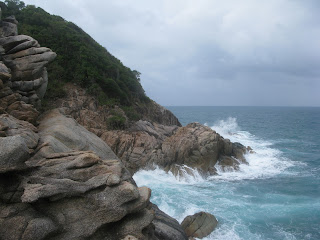 We heard a ukulele in the room next door.
Canadians!
Small world.
Tom and Chelsea from Calgary.
We went to a party at a local beach bar. Tried the local “Monkey Juice”- basically liquorice vanilla rum- almost as quality as the Indian $2 ‘Triple X.’ In Keegan’s words “felt good but hurt later….really hurt this morning actually…”
After another productive day… you know sleeping…swimming… walking the beach… and a good bush wack out to the point for some storm watching, our Canadian friends informed us an 8.9 earthquake hit Japan.
Which meant a tsunami headed for Indonesia.
Malaysia is beside Indonesia.
To put it in perspective, the earthquake that messed up Thailand wasn’t that big. This is, if I’m not mistaken, the 7th largest earthquake recorded ever. But I’m sure you all watch the news.
So we-literally- packed our bags and headed for the hills.
But not before buying cookies.
So there we were. Four Canadians, three ukuleles, and enough oreos, pringles and digestive biscuits to survive the second coming. Sitting in a construction site on a hill. Mowing food. Waiting for disaster. Nobody else seemed particularly worried.
Well as you can assume from this blog, the tsunami missed us. Apparently Hawaii’s a little worried.
A strange way to pass an evening no doubt. Eating cookies. Waiting for everyone below to get wet. Not sure if we’re paranoid or prepared. But hey, at least the Canadians are going to survive. Eh?
Keegan has just informed me I’ve been typing for a solid two hours. I hope for your sake I’m just a slow typer.

Meanwhile. We’ve evaded disaster, and are enjoying the new, slower pace. If you would like a post card from paradise, now would be a good time to drop me your address. 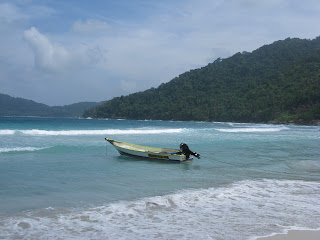