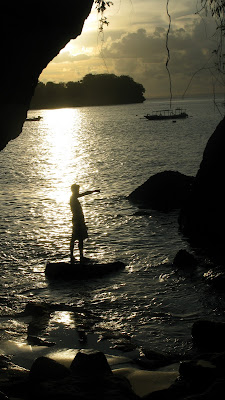 These are Keegan’s infamous quick facts, a man’s version of two weeks of travels.
It was fun.
….end of story?
From the Perhentian islands we made our way back to Kuala Lumpur where we hung out for a few days getting our bearings, hanging out with friends, trying to get an extended visa to Indonesia, checking out tourist traps, and even learned that flip flops are apparently not acceptable in night clubs with Lamborghini’s parked outside. And that, that was one sentence. For fifty dollars an hour you can make the four hour flight from KL to the good vibe island of Bali, Indonesia. I guess it’s alright.
The sun bakes our backs every day, the azure waters sparkle like stained glass in a sunset as you dip your toes in and realize that it’s oh so warm, and most importantly…  the warm smiles of the people are genuine. I don’t know what we did to deserve this.  Life is hard. 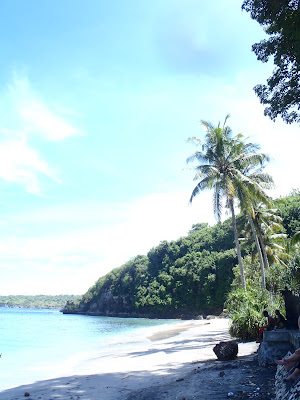 Starting in Sanur I chased the waves first east, then west to Kuta, then south to Nusa Dua to no avail. After three days, two pairs of fake Ray Bands, one new tank top to combat an aggressive farmer’s tan, and a five dollar shirt shopping spree we went back to Sanur and threw down the big bucks taking a “Fast Boat” to Nusa Lembongan. Believe me the “Slow Boat” really is amazingly slow.
Nusa Lembongan is super cool. Through a repertoire of stories lived by locals and passed on to me via the infamous Mang: a kiwi who’s been coming here for 23 years consecutively, I’ve learned about the past and present black magic, mafia, and fleet of pro surfers to come off this small island of 2500 people. I’m even going to my third session later today with a local black magic “guru” /medicine man. He’s been taking great pleasure in poking my feet and blowing away bad spirits. His wife makes great Thai food though.
The place we’re “shacked” up in has a restaurant, lounge chairs, waterfront view of the swells and stunner sunsets, and a pool. All for the disgustingly posh price of $15 a night (oh baby!). From left to right the surf breaks are labeled Shipwrecks, Razors (aptly named), Lacerations (also aptly named…), and Playgrounds. All feature incredible samples of super sharp mushroom coral. When dropping into a wave you can check out all the fish, watch as the crabs take cover, and closely inspect the colour of the local under sea flora and fauna as it prepares to rip you in half. It’s a great place to learn…
So we’ve been here 10 days? I don’t know what day it is. Surfing, snorkelling, and scuba have ensued. Wildlife has been spotted. Good food has been eaten. And Kristina has finally forsaken her Danish heritage and is developing a tan. Life is good.
I’ll go pull the author I know you all want to hear from out of the pool. Scratch that, she’s reading a book on a lounge chair basking in the afternoon sun. (If anybody has any research supporting the washing of one’s hair can you send it to her? thanks).
Ketut the magic man is calling. Here’s Kristina to fill in the details.
Cheers, Keegan
ps. I destroyed my waterproof tough adventure camera. Which means we now have a communal tank top, and a communal camera. 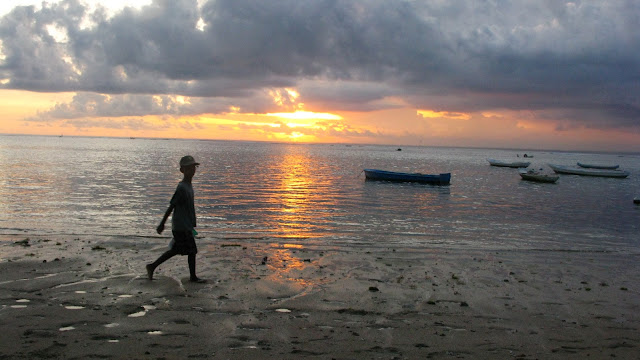 KRISTINA’S TRANSLATION
Well that was fun.
I was a bit overwhelmed at the prospect of covering the last 2 (or is it 3?) weeks and asked Keegan to lend me a hand.
That’s a lie.
The sun has baked my brain and I was simply too lazy to drag myself off my poolside chaise and focus my attention away from the sun, surf, scuba, sand, snorkelling and suspense of “Jane Eyre” (she hasn’t professed her love and he’s going to marry another woman!?- and whats with the secret in the attic?)
Alas, I tore myself away. Principally to temporarily appease my mother’s (among others’) hints, nudges and full blown complaints that I had yet to update.
I suppose I was hesitant because it felt like there was little to divulge- besides perhaps brag about the utter and total relaxation the last 10 days have bore. The last 10 days having been spent, as Keegan (in his cryptic way) mentioned, on the small island of Nusa Lembongan, just off the SE coast of Bali. As he alluded, the water is azure, the breezes gentle and the people unrelentingly friendly, smiling and hospitable. Also, there are no cars: only mopeds and bicycles. It is in a word, chill. Our hotel, “Tarci” has tables right to the breakwater that allow us to eat our meals while watching the surf curl as some of Indonesia’s best surfers (some of them wee tiny tots!) rip and carve. Our hotel also has a pool, and yes, we are paying $15. I should mention we could be paying $10 but I insisted on air con. And no that price isn’t each- that’s $15 split between the two of us.
Not too shabby.
Still wondering why we lingered 10 days? I’ll go on. The island (like all of Bali) is renowned for both surf and scuba, so on the days we actually manage to drag ourselves up at a timely hour (occasionally) we have adequate activities to satisfy both our tastes. The first two days we rented surfboards and had a boat take us out to “Playgrounds” aptly named because it is a gentle (comparatively) spot for newbies to learn. The waves here, unlike Tofino, break when they hit the coral reef, rather than when they hit the beach. This means two things: its somewhat nice to hire a boat to take you out there, so you’re not pooched before you get there, and that when you fall, you run the risk of being smashed up against the all too shallow (and sharp) coral and thus having your feet, legs or other ligaments shredded.  There are many scars wandering the beach that tell this tale. So when I tell you the other ‘breaks’ are known as “Shipwrecks,” “Razors,” and “Lacerations,” you can only use your imagination… 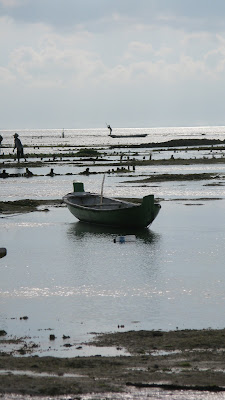 So for 2 days we sat on our boards and I successfully managed to evade every wave that came my direction. I DID however manage to catch a killer sunburn.  Note: when you tell a male to “just go around the bikini straps,” take care to ascertain whether he fully comprehends, and doesn’t, how shall we say, leave huge gaps which are now peeling…
Keegan, his long standing dream of surfing not soon deterred, has been out several times since, also to Shipwrecks, but with little avail. In his defense, the waves are HUGE , and there are many well seasoned surfers to contend with. Surfing, I suppose (unlike the wind sports I prefer to partake in) is somewhat competitive, and one must be aggressive to beat out the 30+ other surfers for a wave.
On another occasion we rented bicycles to explore the island. The narrow asphalt traced along the clear turquoise waters, only momentarily shaded by the lush and vibrant mangrove foliage.
Yes, I am exercising my descriptive abilities. Not because I mean to brag maliciously but because well, it was pretty darn nice. Particularly to be on a bike again.

On another occasion we awoke early to go diving/snorkelling. We were taken by boat to Manta Point where I scuba dove and Keegan snorkelled. Unfortunately the water was too deep and conditions rough for snorkelling but I can happily say that down below we were treated with the sighting of a manta ray every few minutes. (About 6-8!) They are huge, graceful, prehistoric looking creatures. Like a terradactyl of the sea yet calm and peaceful. After being served lunch on a sandy secluded beach we dove in Crystal Bay, which was much better for snorkelling and even better for diving. Huge coral structures of every imaginable colour and plenty of schools of patterned fish (plus a moray eel and banded cleaner shrimp!)

I should mention that it was here that the supposedly bomb proof Olympus camera popped open its water proof seal and filled with water… but at least the pictures survived!
Yesterday we also walked in off the beach near the mangroves and went snorkelling where it was almost as lush. It struck me how oblivious this other world is too us and yet so delicately affected…
Now I’ll backtrack and fill in a few holes Keegan left decidedly vague…
After the Perhentians we once again took the overnight bus back to the same hostel in Kuala Lumpur. During our stay of several days two memorable events occurred: Rosy and Alice, friends of Keegan’s flew in and we took them, as Callum had us, to Batu Caves, where we once again missed out on the “Dark Cave” because we were too cheap to fork out for the $12 tour (budget travelling!) The second event Keegan alluded to about flipflops occurred on our last night. Keegan and I were planning on finally indulging in the much advertised (or should I say hawked) ‘foot reflexology’ before calling it an early night, as our flight to Bali was early the next morning. Callum however, impeached us to come out on the town with some of the modelling crowd, and after calling us a married couple… we agreed to “live a little.” Hah. So off we went on an impromptu shopping spree in order to spiff up, because reader, somehow or other in my packing haste, I left my stilletos at home. The power shopping yielded little, it being already 10 or 11 (and of course we still had to get that foot massage- which resulted in 30 minutes of a man rubbing my feet yet taking every care not the look remotely in my direction= awkward.) So we did the best we could, and aside perhaps from the flip flops- thought we looked pretty darn good. Relatively speaking of course. We’d just travelled India: a comb through the hair and a swipe of deodorant, maybe a pair of earrings- we felt fit to dine with the Queen. We were brought back to reality however when the bouncer at “Elixir” told us we could not come in with flip flops nor without a collared shirt.
…
Shit.
Well then.
A drink at a bar down the lane later and we formulated the brilliant (pathetic? Married? No! Brilliant) plan to stock up on booze at the local 7/11 and watch Toy Story 3 on my laptop back at the hotel.
I know.
We live on the wild side.
Thus ended our game of dress-up.
And that brings Malaysia to a close.
I raise a toast to Indonesia. Where we hope to extend our visa, having already blown through half of our allotted 30 days without even seeing much of Bali.

Bali is funky, and seems like it has a lot to offer and discover. Tomorrow we leave our island enclave and head back to the ‘big city.’ After obtaining our visas we plan (plan being used tentatively- they aren’t exactly ‘a la mode’ here) to visit Ubud, an inland mecca of handiwork and artisan goods. Aka where all that shit in the Bali import stores is actually made. SHOPPING. And after that? Who really cares…
I hope the sun has started to peak out and show its face back home…
Until next time!