The world needs to adapt to climate change. Regardless of the level of effort to reduce greenhouse gas emissions, some adaptation will be necessary.

The adaptation challenge is thought to be greatest in the developing world, especially “least developed countries”, which are in the unfair position of being the least prepared to respond to a problem they did not create. In response, developed countries and international institutions like the World Bank are increasingly directing aid towards climate change adaptation. Under the UN Framework Convention on Climate Change, the developed world has agreed to mobilize $100 billion per year by the year 2020 to help the developing world respond to climate change. 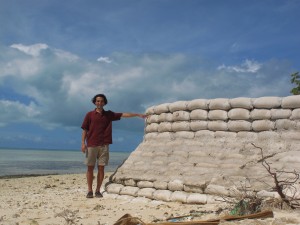 New sea wall in Tarawa, Kiribati, with author for reference (2012)

How will this work on the ground? How will adaptation decisions be made, given that the future is uncertain and countries are relying on the highly imperfect international development apparatus for resources and expertise?

There is a lot of terrific theoretical work on the “coulds” and “shoulds” of adaptation, but less forensic analysis of how it happens on the ground.

A new paper by Sophie Webber and I in Sustainability Science attempts to fill that gap, using a case study of preparing for sea level rise in Kiribati. As home to the World Bank’s first climate change adaptation project, Kiribati is an ideal place to learn about the challenges of adaptation on the ground (close to the ocean as that ground may be!).

The paper builds on interviews conducted over the years of field work in Kiribati. We try to trace the many forces influencing decisions,  including the uncertainty about future sea level, the trade-offs between different adaptation options (e.g. sea walls, mangrove planting) and the local cultural, political and economic context. Along the way, we identify some useful lessons from the Kiribati experience, like the value of short planning horizons to reduce trade-offs and scientific uncertainty. The story of the sea wall in that photo helps illustrate what adaptation is often like in the real world: complicated, messy and expensive, no matter how pure the intentions. From the conclusion:

Visitors to Tarawa can see the office of the Kiribati Adaptation Project, public notices and signs, new seawalls, equipment for the mid-lagoon dredging project, mangrove saplings planted alongside several causeways, new water tanks in certain villages, and construction of new water pipes for the reticulation system. Like all first steps, these initial actions towards adapting to an uncertain future are cautious, unsure and sometimes backwards.

3 thoughts on “Adapting to climate change, in the real world”