Climate scientists often say stopping climate change is like stopping a supertanker. The ship has a lot of momentum, so you can’t just slam on the brakes at the last minute.

In Canada, the emissions supertanker has been charging along despite repeated warnings of the iceberg ahead. After years without serious coordinated federal action, a promise to meet an ambitious emissions target, no matter how well-intentioned, no matter how grounded in scientific analysis, now looks unrealistic.

Here are the emissions since 1990 together with the Environment Canada projection to 2030, the various proposed emissions targets, and some coarse reduction scenarios. 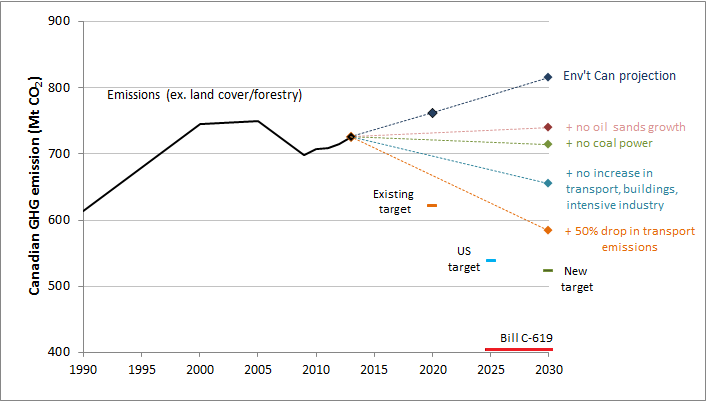 Most analysts argue that the current government’s policies and plans are not close to sufficient to reach the existing target (17% below 2005 levels by 2020) or the new target (30% below 2005 levels by 2030). The emissions target from the “Climate Change Accountability Act” Bill C-619 (34% below 1990 levels by 2025, now 2025-2030), which the NDP pledges to reintroduce if elected, is even more unrealistic. Again, this is not about the scientific value of the target – Bill C619 would put Canada in line with the global goal of reducing emissions sufficiently by 2050 to avoid a high probability of 2 degrees C warming.

It’s clear from the emissions inventory that to reach even the less ambitious current targets, Canada would need to reign in emissions from the oil and gas sector and ramp up efficiency in transportation, buildings and other intensive industries (not to mention forestry – not included in this analysis). Many of the necessary innovations are possible, and some may be encouraged by resource prices and other global factors. It will still be difficult to meet the new 2030 target, let alone the ambitious and likely politically impossible Bill C-619 target.

After twenty years of political rhetoric, the plans are more important than the targets. Canada may not meet the proposed targets but it can at least make some progress and show a serious commitment to addressing climate change.