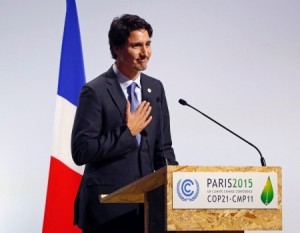 At this week’s First Ministers’ Meeting here in Vancouver, the federal government begins the politically difficult task of establishing a national climate policy. The first step is coordinating the existing patchwork of provincial policies and carbon pricing systems.

Underlying this conversation is a question that has remained unanswered since Canada’s much-celebrated turn at the 2015 United Nations climate summit in Paris:

Are the existing or proposed national emissions targets consistent with the global promises made in Paris?

Together with Kirsten Zickfeld of Simon Fraser University, I completed a report on future CO2 emissions trajectories for Canada that are consistent with avoiding the global temperature limits in the Paris Climate Agreement.

The analysis in our report suggests that the current Canadian target of a 30% reduction below 2005 levels by 2030 could be consistent with maintaining a likely chance (66%) of limiting warming to less than 2°C globally, but only if Canada is given a generous allocation of the world’s “remaining” future carbon budget (based on the present fraction of the world’s emissions). A target consistent with a likely (66%) chance of avoiding 1.5°C of warming globally is extremely limited regardless of the method of allocation. Even under a generous allocation to Canada, national net CO2 emissions would need to decline 90-99% below 2005 levels by 2030.

For more, see the full report available here. I’ll also write more on this subject in the coming weeks.