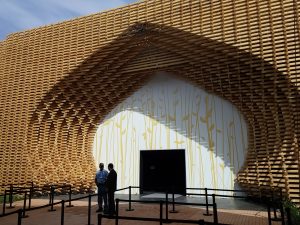 The venue for COP22 here in Marrakech is a mini village assembled just outside of the old city walls. The buildings holding the negotiations and side events are all temporary. Like an old Saharan caravan, the entire complex of tents and temporary shelters can be dismantled when the event is complete. With the surprise victory of Donald Trump, people across the world are worried that the agreements being made inside those buildings may also be dismantled.

The Trump victory and Republican sweep of the Senate and Congress is clearly bad news for the climate. As we’ve all heard by now, the incoming administration may cancel programs aimed at reducing emissions, helping Americans adapt to climate change, and supporting the developing world. It may withdraw from the Paris Climate Agreement, at least in spirit. Doing so may give a number of other countries from Saudi Arabia to India to yes, even Canada, an excuse to delay climate action.

I don’t know what will happen. No one here in Marrakech does. Take every story you hear about the “behind-the-scenes” talks with respect to Trump at COP22 with a heaping mound of Moroccan desert salt. We’re all guessing until he takes office.

I can only add this: Maybe the world’s governments need this test.

For years, international climate policy has been steered by the immense gravitational pull of U.S. politics. The waxing and waning of U.S. government willingness to address climate change effectively controlled the position of almost every country on the planet outside of Western Europe.

This outsized role of the U.S. was also never going to be sustainable in the long-term. Certainly U.S. leadership was critical at the beginning of this process and in creating the Paris Climate Agreement. Eventually leadership was going to have to come from other nations. The U.S. share of the global economy and of global greenhouse gas emissions has been declining. Its influence on the path of international climate policy was eventually going to follow.

Keep in mind much of the progress internationally in the past few years is not a result of U.S. leadership. China’s promises in the bilateral deal with the U.S., the deal that paved the way for Paris, did not result from the U.S. extracting concessions. China pledged what it intended to pledge, thanks to internal decisions about addressing climate change, air pollution, and energy needs (not necessarily in that order!). That’s not going to change.

It is possible that Trump’s approach to the UN climate process will end up demonstrating that the world is ready to forge ahead in addressing climate change with or without the U.S. Ironically, it could actually confirm the concerns of many of Trump’s supporters that Americans are ‘losing’ to the rest of the world.