I was looking at PostSecret today and I noticed these two secrets that were posted: 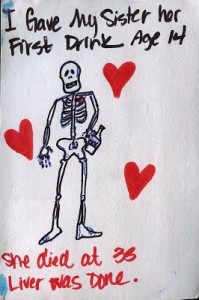 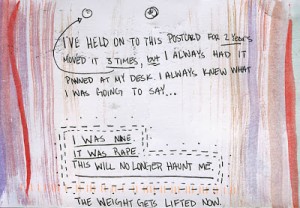 These two posts made me stop and freeze in my tracks. I’ve had to look at PostSecret for my presentation, but these two just jumped out at me for the raw honesty in these people’s mini autobiographies. They talk about horrible things that have happened to them, but don’t at all filter it. It presents us with a shock value that makes us sit up straight and think about PostSecret. This is what I’m doing.

Both these posts show how regret can tear you up. In the first case, regret of your past events and in the second, regret for being silent. We can see from this that PostSecret allows for people to post and share the things they wish never happened. Instead of bottling it up, they post online and they have to deal with it. Look at the example of the second postcard. This person had held onto the card for 2 years, before they sent it in. However, once they did they felt free. This goes back directly to a quote that Frank Warren, the founder of PostSecret said.

You will find your answers in the secrets of strangers. – Frank Warren

By posting online this person was able to feel free. However, we don’t know if author of the first postcard felt free after sending in their secret. The contrast between the horrible message and the cartoony images seems to imply a sort of self-deprecating regret that exemplifies the author’s inner turmoil. One tool that PostSecret uses which is not part of the official website is a discussion board. On it, people can communicate and discuss and provide help for those who are suffering. So while we might not be able to tell how the person felt after submitting their secret, we can show that there is an alternate forum for them to come to peace if they so choose.

PostSecret is interesting because it presents a platform where the viewer can observe the unguarded lives of people. The cyclical humour of the first post, paired with the tragedy yet comforting second posts show us where postsecrets can start, but how every person’s journey to resolution is different. For both people, the act of sending away their secrets let them come to some sort of conclusion. For the first person it’s the fact that now that it is on the web they have to deal with their regret and sadness. For the other is that now they are unburdened by their sadness and it leads to their relief. Relief in moving on and having a new life.

PostSecret’s like these leave me uncomfortable. Perhaps it is the private nature of our society has socialized me to be weary of such unguarded emotion. A downfall of PostSecret is that there isn’t much I can do when I learn about these peoples suffering. As humans we want to fix problems, but with PostSecret their isn’t much we can do besides posting words of sympathy on a discussion forum.

There is a sort of burden that we as viewers take on. A burden of a witness that see’s what is happening, but can do nothing to stop it. We can compare this to the TRC. Horrible things happened to Native Canadians and so out of respect and dignity we listen to their sorrows. As witnesses of tragedy we often have feelings of despair. We want to make the world a fixable place, but it is not. So the best we can do are things like the “International Suicide Prevention Program” and the TRC that allow is to help, but not fix people.

By celebrating and becoming the culture of confession, we have a role to play as witness and that is helping people. That may be implied through invisible people on PostSecret sympathizing with someone or directly as providing advice for people on the forum. Whatever it is as witnesses we have roles to play in regret, relief and confession.

Edit: This blog post was going to be about comparing the way stories are taken and changed. I was going to look at UBC and the sexual assaults as a case study, but I was stopped by the TBTN website. Perhaps later.

Recently, I was inspired by Makoto’s post on the “take back the night” campaign and the sexual assaults occurring at UBC, to write my own post on Take Back the Night and the commodification of the name and people’s stories at UBC.

On October 30 2013, 200 students took to the streets of UBC to demand that the university step up it’s game in protecting student safety and dealing with rape culture on campus. The group held a “take back the night” event, which is an internationally held protest and rally against sexual assault and rape:

“Take Back The Night has become internationally known, as a way to take a stand against sexual violence and speak out against these horrible crimes. The first documented Take Back The Night event in the United States took place in October of 1975 in Philadelphia, Pennsylvania. Citizens rallied together after the murder of young microbiologist, Susan Alexander Speeth, who was stabbed to death by a stranger no more than a block away from her home while walking the streets, alone.

While I was doing research on this campaign and it’s roots, I came across the website for the Take Back The Night Foundation®. The group was founded in 1999, in the USA, and has subsequently trademarked the name that came 24 years before them. The website has links for people to buy TBTN apparel and kits that include banners. A majority of the website is dedicated for people to buy things. There is page for people to sign a pledge that says

“I believe in what the Take Back The Night ® Foundation stands for, and support their cause to end sexual violence.”

Additionally the website has 50 pages dedicated for survivors (read: not victims) to share their stories anonymously. The stories are of people who have sexually assaulted in some way or another. The only thing that identifies the person is their age and their location. The stories are brutal and honest, and they provide a big wow-factor. Their purpose however is lost in the website. Surrounded by sign to buy wristbands and shirts and to sponsor the foundation, the stories become something else that we can “buy” and “consume.”

I think it is interesting to see how an idea or movement can be comidified into a trademarked organization that sell’s products and merchandise as well as stories. I wonder who this relates to Whitlock…

PostSecret and Six-Word Memoir are both recent genres created within the past 10 years. They are part of the larger life narrative genre that can be argued to include the: novel, blogs, graphic novel, etc. However, both of these new genre’s a unique approach to life narrative, as they are bite sized and only show a glimpse of someone’s life. Perhaps this makes it more easier for us to relate to them, as we can identify with a part of a person without all the complicated backstory. I am interested in the differences and similarities in these two genres and how they can serve different purposes. I will look at specifically at the time frame in these genres and the voices that get published.

Something that I hadn’t thought of before was that PostSecret is really biased and subjective. Frank Warren receives hundreds of PosSecrets every week, yet he some how chooses only twenty to go up to the site. This is problematic because he is constructing an identity for PostSecret unlike Six-Word Memoir which is user generated. By limiting what goes on to the site he creates a perception of what counts as real secret and what doesn’t. The impact of PostSecret is important on the writers of the published, but what happens to the other nine hundred and eighty writers? Do they get relief? Compare this to Six-Word Memoir that let’s everyone’s posts to go up, and they have a forum for people to engage with the writer.

To the question of: Which one is superior?

It depends on what the submitter’s goals are. If it is to confess and move forward than PostSecret is the ideal platform as individual’s posts are highlighted for seven days in an uncluttered form. Six-word memoir is more for self representation and sharing with a wider community. With it users can share stories that they create that can relate to their lives, but not necessarily as vidid and raw like post secret. It doesn’t have as strict of a mandate and therefore can be more creative and serve more purposes.

Six-Word Memoirs have become a powerful tool to catalyze conversation, spark imagination or simply break the ice. – About Six-Word Memoir

The last message from “reluctant oracle” bore the message, “You will find your answers in the secrets of strangers.” The next Sunday the PostSecret began. – Frank Warren

In the end its impossible to say that any genre is better than the other. They both serve different purposes, but they do have similarities by being online and (semi)anonymous. They both have pros and cons, and that is important to remember.