As atmospheric carbon levels continue to rise, some scientists have

the ocean (Powell, “Will Ocean Iron Fertilization Work?” 2008). For

some, the idea of dumping chemicals into the ocean to fix a problem

with the atmosphere may seem puzzling. However, there is some

scientific reasoning behind this idea.

Some areas of the ocean are high in most nutrients, but critically low in

iron. This lack of iron limits the growth of phytoplankton in these

carbon for photosynthesis, this lack of iron also limits the rate of

atmospheric carbon being lost to the ocean (Powell, “Will Ocean Iron

The ‘iron hypothesis’ suggests that by fertilizing these areas with iron,

phytoplankton can increase in abundance and more atmospheric

carbon will be lost for their photosynthetic purposes (qtd. in Cao and

Caldeira 2010). And when the phytoplankton die, they simply sink and

any potential effects to marine life.

animals by impairing their calcifying abilities, which are needed to maintain exoskeletons like the snail 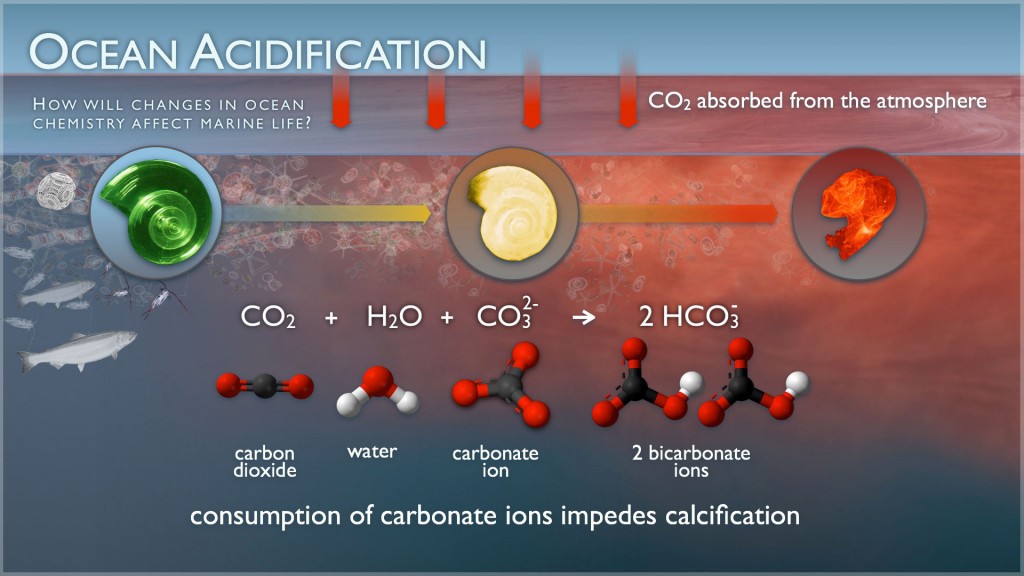 of organisms would include the corals, which require sunlight to grow (Powell, “Fertilizing the Ocean with

Sometimes, iron fertilization can also do the opposite of what it is intended to do. One example of this is

known as ‘nutrient robbing’. Phytoplankton blooms deplete certain nutrients which would have washed

downstream (if not for iron fertilization). Without these nutrients arriving downstream, the number of

fertilization could decrease the number of carbon absorbers in some unfertilized areas.

Ocean with Iron” 2008). So although phytoplankton blooms could absorb atmospheric carbon, they

release other problematic gases right back into the atmosphere (Wayman 2008).

phytoplankton as fast they appear (Powell, “Fertilizing the Ocean with Iron” 2008). In the summer of

2012, a patch of water near Haida Gwaii was fertilized with iron. This caused a phytoplankton bloom, but

by autumn, it was gone. Since crustacean zooplankton numbers were very high, they likely devoured

Although it is great to see people try to address the problem of rising atmospheric carbon levels, iron

fertilization has way too many downfalls and is by no means a proper solution.

Haiken, M (2007). Fertilizing Oceans to Save the Planet. CNN Money.