Because the testes and the scrotal skin are innervated with
nociceptors, it is highly likely that it is a painful and a
stressful event. The causation of stress and pain are the main welfare issues with the procedure, and is seen by many as an unnecessary and cruel practice.

Stressors are factors which induce a physical stress response such as a change in the sympathetic adrenomedullary (SAM) or HPA systems. Stressors tend to cause multifactorial responses in the autonomic nervous system, neuroendocrine system, the immune system and in behaviour.

Common stressors associated with castration include handling and restraint, isolation from the dam, common neonatal infections and of course the pain of castration.

The importance of quantifying the pain experienced due to castration is an important problem in the eyes of animal welfare advocates because of the resistance surrounding the use of pain mitigation before and after castration.

As mentioned before, the testes are well innervated, making them among the few viscera which produce sharp, well-localized pain. Without any anesthetic, or at least analgesics, the pain felt by the animals has been shown to be severe.

The main assessment methods used to quantify the pain associated with castration are physiological and behavioural assessment, and the amount of sensitivity to damaged tissues.

Heart rate and respiration rate are often used as indicators of stress and pain in animals.

Another common measure of pain caused in animals in the concentration of cortisol, a stress hormone, in the animal’s blood. Increased blood (plasma or serum) cortisol level is generally accepted to be the best indicator of the level of pain

A 3-fold increase of plasma cortisol has been recorded approximately 15-30 minutes after surgical removal of the testicles without anesthesia.

Castration of piglets is usually done before the age of 14 days. One study in the EU showed that plasma cortisol concentrations in castrates support the suggestion that castration occurring between 10-14 days is less stressful for the pig than early castration.

Behaviour is often used as a second indicator of the level of pain experienced by an animal.

Many behavioural indicators are used for this purpose including stamping, kicking, quivering, abnormal or unsteady standing, and abnormal postures (eg. arching back), rolling and restlessness. The incidence of these behaviours generally increases proportionally with the intensity of the noxious stimulus indicating an increase in pain

The vocalisations of animals can provide information about various aspects of 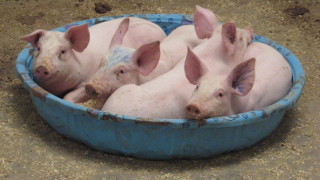 their state. There is a strong theoretical basis for predicting that, in many circumstances, vocal signals will provide parents with reliable information about the sorts of factors that can affect offspring survival.
It has been shown that castrated pigs have a higher frequency of vocalization when compared to sham-castrated pigs (those who are restrained but not cut). Pigs castrated without local anaesthesia gave more high energy frequency (HEF) calls than pigs not given an anaesthetic irrespective of age at castration. In addition, pigs who have a local anesthetic before the procedure have less vocalisations than those who receive no pain mitigation.

A number of studies have pointed out differences in the behaviour of castrated and non-castrated pigs in the hours and days after the procedure.

A number of behaviours such as suckling, play, standing, time to lie down were affected after castration. And some behaviours may emerge that are specific to the injury, for example, sliding across floor on hind-quarters, flicking tail across scrotum. The cutting and severing of the spermatic cord seems to be the procedure which induces the most consistent alterations in behaviors such as vocalization.

Castration has been proven to induce acute pain during the procedure and persistent postoperative pain over several days. Pain mitigation is not required in Canada on piglets under 2 weeks of age, so the procedure is commonly undertaken without any form of analgesic or anesthetic.

If castration is to take place, the proper measures should be taken to ensure the stress and pain of the procedure is minimized.

There are several ways in which this can be done, they are as follows:

Injectable local anaesthetics, such as lidocane, are already known to be highly effective at decreasing pain from castration and similar procedures which is why they are required by many countries if castration is to be performed after a certain age.

Local anaesthesia acts on the nerve tissue to reverse the transmission of pain signals away from the damaged tissue.

Injectable local anaesthetics often require an extended period of time, generally about twenty minutes, to reach their full effectiveness even when administered directly into the desired tissues. This means that if local anesthesia is to be used, it must be done so in a timely manner which allows it to take full effect before the procedure is done.

The additional time required for the use of indictable local anesthetics makes it time consuming and less cost effective, which is discouraging for producers as it seems to be an impractical solution for pig farms.

In addition, it has been argued that the injection of the anesthetic into the testicles before castration may be as painful as the procedure itself, done without anesthetic. And being handled only once (for a un-anesthetized castration) may be less stressful for the pig than having the painful injection, then waiting for a period of time just to be restrained again for the procedure.

There have been attempts to develop a topical local anaesthetic for the purpose of pain mitigation at castration, the anaesthetic agents lack effectiveness due to their inability to penetrate well through the skin.

The use of nitrous oxide (N2O), also referred to as “laughing gas”, is commonly used in human medicine as an analgesic, including surgical procedures and dentistry.

The use of inhalant gases, such as N2O, is a promising alternative to local injections because they allow for fast induction and have short-term and reversible effects, while being a needle free option.

An unexpected and negative effect of the gas used as an anesthetic is that it causes a decreased growth rate post-castration, mainly due to these pigs engaging in less suckling behaviour.

In conclusion, although N2O is effective in inducing anesthesia in neonatal piglets, its analgesic effects are insufficient in preventing castration-induced pain and the detrimental effects on growth rate must be addressed.

A recent study demonstrated that isoflurane or isoflurane/N2O anaesthesia by mask induction proves to be a safe, short and reliable method in piglets undergoing castration. It only took, on average, 36 seconds to anesthetize the pigs before the procedure. Reaction to the castration were significantly reduced when using this method.

It would need to be used in combination with an analgesic if this compound was to be used as an alternative, especially post-operatively.

A recent study tested the effectiveness of using a non-steroidal anti-inflammatory drug (NSAIDs) to allevate pain in addition to carbon dioxide gas (CO2) used as an anesthetic during castration.

They found that, although they were hopeful, neither CO(2) anesthesia nor an NSAID, given separately or combined, markedly reduced the pain-induced distress caused by castration in pigs.