In line with the dread stirred up by the end of term, a grimly sublime photo series by David Maisel, titled Oblivion:

(I’m wondering how spatial, locative applications like google maps might be used in our term projects – in addition to narrative/fiction overlays, what about critical/theory-based ones, or some combination of the two?)

I was ruminating on these pictures after Monday’s heated discussion, and I was reminded of a visual art lecture I attended that was about representation.  The main point was that a representation of a certain thing be it a 1) picture 2) painting 3) blog 4) insert your own representational item here, or turn to page 8 to see what happens with the sharks!

Perhaps the most famous manifestation of representation versus reality was the Magritte painting, The Treachery of Images, in which a painting of tobacco pipe is accompanied by lettering that tells the reader, “Ceci n’est pas une pipe,” or, “This is not a pipe.”  Truly, it is not a pipe because we can’t use it to smoke.  I wanted to insert a link here, but the tubes will not obey my will today.

Other than that observation, I just wanted to see if anyone has read Cormac McCarthy’s The Road.  Not super important, but there is a section near the middle where the narrator is waxing all poetical and shit, and he wonders why it is that we remember what we want to forget (trauma) and forget what we want to remember (names, faces, etc).  I thought that vaguely related to The Ebb of Memory, and the camouflage class concept that so amused us on Monday.

In addition to Shelly  Jackson’s interview and Kristin Veel’s article, some images we’ll be discussing tomorrow, by Vito Acconci: 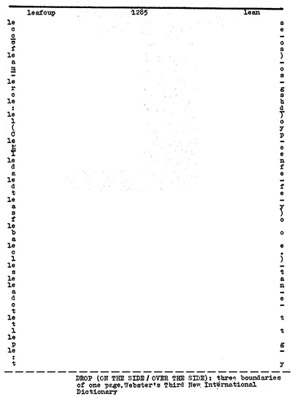 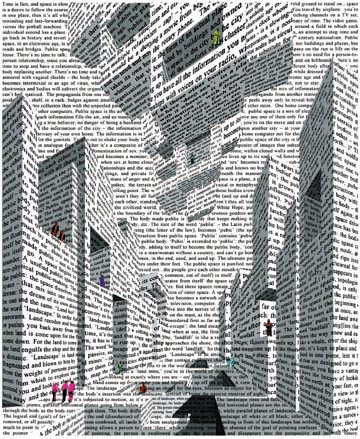 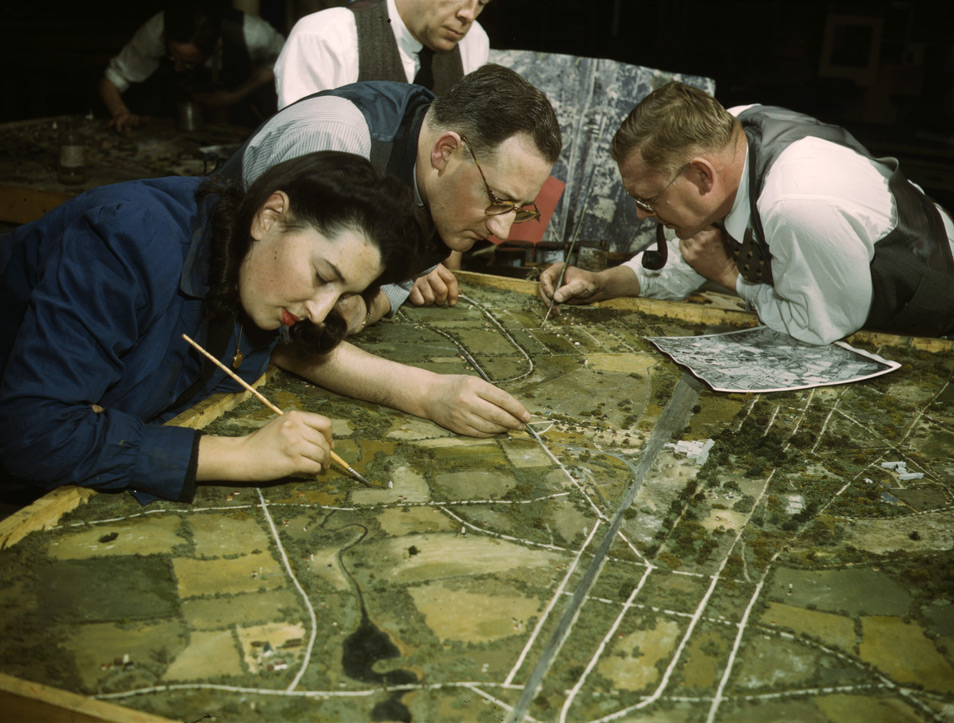 A 1943 “camouflage class” at NYU – students prepare for jobs in the Army or in industry by making models from aerial photographs. The models are themselves photographed and used to develop camouflage schemes; simulacrum of a landscape, encrypted with the fantasies of war.

A lot of artists have grappled with the effects of facsimile in this context – from Don Delillo’s most photographed barn in America, to the photography of Oliver Boeburg and Thomas Demand. In each case, with the continued replication of a scene comes a peeling-away of its original signification; uncanny and auratic, it becomes a place of unbridled potential, unsettled and pushed into a realm of the fictive and imaginary, hitherto camouflaged in geometries and landscapes of the everyday.

“The sharp upswing in all of this record-keeping – both active and passive – are redefining one of the core elements of what it means to be human, namely to remember. We are moving towards a culture that has outsourced this essential quality of existence to machines, to a vast and distributed prosthesis. This infrastructure exists right now, but very soon we’ll be living with the first adult generation whose entire lives are embedded in it…For the next generation, it will be impossible to forget it, and harder to remember.”

Via things: Kevin Slavin writes on digital archiving and recollection. (scroll to the bottom)

Well…all right.  As usual I am writing this the night before it is due, with no real idea as to what I really want to say.  All I know is that I couldn’t decide which piece with which I wanted to study ‘critcally.’  Whatever that means.

Finally in the last moments it came to me.  Or rather it appeared on my screen through the intra-blarg.  I really prefer to write as I speak, in case that hasn’t become clear, but you are all bright eyed and sharp as tacks, so I am sure you saw through my pretentious throw-away comments.

So considering that I like to keep my funky fresh flows as informal as possible, and we are writing for a blog, and Dick’s speech is very anecdotal I figured I would engage with a few of his ideas.  He certainly puts forth more than a few novel concepts in this piece, and I could probably spend countless hours trying to dissect his ‘drug-addled ramblings’ as Hung Te called them.  Also, we briefly touched on this in class, so please forgive any rote repetition for those not present.  Very early in the speech, he says this:

“The old, the ossified, must always give way to new life and the birth of new things. Before the new things can be born the old must perish…What I am saying is that objects, customs, habits, and ways of life must perish so that the authentic human being can live”

So what Dick seems to be saying is that traditions–which normally are the foundation of any culture–must be exorcised to make way for new practices.  This implies that the new things take nothing from their ancestors, and old things die out withour propagating.  But without old practices upon which to base new evolutions where is this progress coming from?

Alas, later in his speech, Dick invokes one of the oldest institutions–the Church–in order to legitimize his bid for the supernatural.  He claims to have channeled the essence of the Holy Spirit in order to have predicted the events that happened to him later in life.  I find it hard to reconcile that a man of such fantastic imagination would also believe that God’s thoughts and God’s plan were the ultimate causation for all things.

Again, I apologize for the repetition, but I need to set the stage for my next two Dick-inspired (hahahahaha…get those dick laughs out now) anecdotal jumps.  In the first part, I was raised Catholic.  I went to private school all my life, and while that is not all that special, I went to an all-male Catholic prep school.  Yep.  Pressed shirt, tie, blazer with a crest, pleated slacks…the whole shebang-a-bang.  Picture that for a moment if you will.  I would link pictures, but I might die of embarassment.

So!  In short, I was taught by a selection of religious brothers over the years and intelligent design was the rule.  Basically, God planned every step of the way, from evolving from apes to waking up this morning with clutches of yesterday still clinging to you.  Yep, that was all God, the Holy Ghost (which is a fucking terrifying concept when you are 8), and J.C.

But the best way to get someone to reject a religion is force them to practice it for 12 years.  Yeah, I was an altar server, and I am convinced my parents will one day try and blackmail me with the pictures.  So it would be safe to say that I have effectively rejected most of the dogmas of Catholicism.  I mean, it’s pretty tough to toss out the things like don’t kill, don’t steal.  Those are tenets of basically any religion or code of conduct.  Everyone should live like that, right?

So when I see Dick riposte by saying–in so many words–that intelligent design is kosher as Christmas and he writes by chanelling the Holy Ghost, the alarm bells start going off.  Later in the address, Dick says this, “my two preoccupations in my writing are “What is reality?” and “What is the authentic human?”  So then I started thinking about this part of his argument in terms of Clarke’s City and the Stars.

Diaspar is a city that ultimately turns in upon itself, relying on traditions to maintaint itself.  But what kind of existence doe sit have?  It’s a paltry half-life.  They sit in stasis.  There is no variety, no adventure, nothing new.  All it takes is one free-thinking man to break the cycle though.  These ossified traditions do need to be excised so that new ones may develop.  They have led an ingenuine humanity to a place where there is no such thing as progress and truly in order to go forward we must go backwards.

a quick reminder – if you’ve yet to read Matt Jones’ presentation on new media, you can find it below. On a less related note, a post on sdmybt distilling urbanism from films like Aliens and Gremlins 2 is worth a look as well.

Hey everyone, thought this event might interest some of you. I’ll definitely be going.

Here’s the official invite for the March 14th eatART event at the Great Northern Way Campus.

We’ll be showing off all of our large-scale New Media sculptures including The Mondo Spider, Daisy the Solar Powered Tricycle, the containR and the Heliomatrix. From 7pm-9pm is family time and we’re encouraging people to bring their kids, parents and grandparents. I’ve attached the poster and the press release. Please forward this invite to all those who you think may be interested. I promise it will be an exhilarating new media experience.

Hi everyone: My name is Gisele Baxter; some of you already know me from other classes. I’m the Faculty Sponsor for this course and so am responsible for grading your term papers/projects. I’ve been at UBC since the dawn of time 1997, teaching sessionally in the English Department; my teaching/research interests include 20th/21st century literary and cultural studies, pop culture, near-future dystopias, children’s literature, the Gothic inheritance, gender studies, and composition (academic and technical writing).

I want to establish some basic guidelines for the term paper/project, so that it can be evaluated fairly and so that it will enable the course to meet the standards of an honours-level seminar. I’d like some feedback, and any questions or suggestions you might have, so I’m posting the material below, and am happy to field questions either online or perhaps via a visit to class (that was supposed to happen much earlier in term but various elements of the unforeseen intervened).

The topic of your paper will be up to you to develop, with the broad guideline that it should engage with issues/texts relevant to the concerns/approach of the course. Beyond that, there are some considerations given that this is a senior seminar: all papers should be 8-12 double-spaced pages in length, should employ at least four secondary sources (in other words, should have a strong research component and go beyond just close textual reading), should employ some recognizable and relevant critical/theoretical framework (i.e. should go beyond “different but similar” comparisons or subjective responses) should use MLA documentation/citation, and should be technically proficient (i.e. should be revised and proofread thoroughly before submission). That still leaves a lot of flexibility: you might choose to pursue cross-disciplinary/multi-disciplinary approaches, incorporation of visual/multimedia material, some subjective situation as the writer (of the sort normally discouraged in academic writing), etc. I’m happy with collaborative projects so long as the collaborators are happy with getting each the same grade; in such cases the paper would be 12-16 pages long and would require at least six secondary sources.

Any questions/suggestions? Post them here as comments (I am very comfortable with online discussion), or email me at gmb@interchange.ubc.ca; my office is Buchanan Tower 427 (poster for this course and Darth Vader postcard on the door), and my office hours are MWF 10-10:50 a.m. and by appointment.