A woman deserves the same rights as a man. I think everyone agrees with that statement. Even looking at the time period, reading the letter written by Josefina Pelliza da Sagasta had left me utterly shocked considering the fact she is a woman herself. You can clearly understand how progressive her ideology is and the harmful stereotypes perpetuated. To say “What man would want to see his daughters educated to be teachers and his sons for uselessness? What man would thus decline the sacred rights of his nature?” is alarming and coneys this message that if women are seen at the same pedestal of a man that is detrimental for him.

Comparing this to Maria’s letter where she describes this hope to see women move forward and live their lives to the fullest capacity is quite contrasting. She was able to eloquently voice strong principles through paper. Women of Latin America during the 19th/ early 20th century seemed to have clashing opinions when it came to their rights. From what I read, Josefina’s beliefs were normalized whereas Echenique’s were outlawed in the face of society. Misogyny and gender discrimination are issue dealt with on a daily occurrence.  When it becomes internalized, that is an even more harmful outcome.

Moving on, a country’s constitution  or declaration appears to be the basis of its existence. With a set of rules promoting equal rights and freedom for all, it gives the impression of being guaranteed. We can see this was not the case in Latin and North America. People of colour faced discrimination and lack of justice throughout the education and political system, job market, and much more. Although, South America tended to not specify based on race unlike the United States where hatred was in the public domain on all aspects. It was written in the passage that an African American felt welcomed in Brazil without any prejudice. I think that Latin America had accepted the apparent racial differences. The issue wasn’t the fact they were POC but making sure they didn’t get the same opportunities to get ahead. Even with slavery abolished, a lot of freed slaves still worked for their former owners or were denied employment and pushed aside for migrants. The bare minimum rights received looked to be as already too much and asking for more was excessive. Having these laws were useless knowing the attitudes of people stayed the same. You cannot produce something on paper and expect it to be implemented in the community without real social change?

Can you say the treatment of POC was somewhat better in Latin America compared to the United States? Or was it vice versa?

How can social change be implemented?

Casta Paintings are something I’ve never heard of/seen before but I can say I’m very intrigued. In a social justice class in high school, we touched upon caste systems around the world. I noticed it was typically based on religion, social groups, jobs but rarely race. We went into detail about the racial system in Brazil. I am familiar with the terms used in the paintings but not the concept.

There were three individuals, a woman, man and child in each painting alongside numbers labelling them with a description of their race. A picture really depicts a larger idea. With the different outfits, objects and background scenery, a viewer can get an overall gist of what they’re really looking at. The various careers they seemed to have were a shoemaker, musician, seller and what looks like a don/general.

A common trend seems to be the higher up and more “European blood” relationships were showcased as richer based on their clothing and the objects around the paintings. They obviously were employed in more respectable jobs. When you went down the board looking at relationships with Native and African descents, their clothing was not as appealing and you can see they do more manual/labour work. If a European man was with a women of another background, he still seems well off but a Spanish women in a similar situation was lower on the canvas.

To me, I find this discriminatory and dividing between the races. As mentioned in the lecture, this was the root of an identity crisis. The whole idea of painting all possible bloodlines is excessive and unnecessary. My mind instantly gravitated towards racial whitening or “blanqueamineto” where following generations were trying to get “rid” of any black or indigenous heritage. The photo I attached below was shown in my class a lot. I believe the context behind it was a grandmother who had a mixed child feeling joyful that her daughter married a European man and had a child who basically looks white. I know that specific tradition was popular in areas after colonialism especially in the early 1900’s. 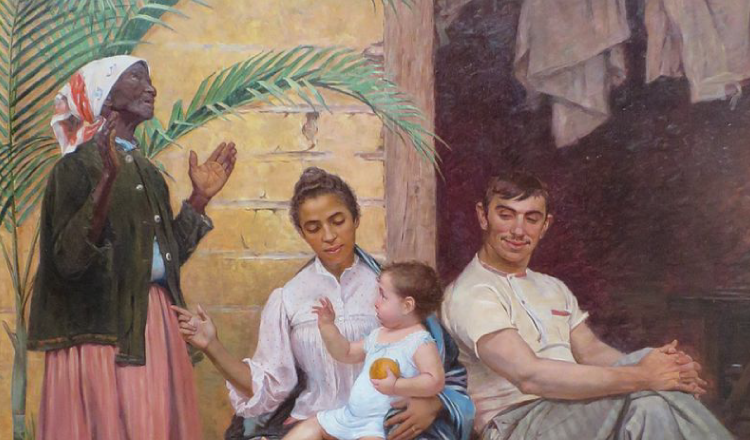 History tends to repeat itself in multiple ways. Looking closer at the Casta Paintings, I can see that being of/closer to European descent was more beneficial and desired. Issues seen today with the beauty standard, colorism and even racism can stem from something like this. I know a lot of other countries who were colonized have a common ground. I’ve heard about it during ethnic cleansings as well.

How were Casta Paintings harmful for the following generations post colonialism? What are some long or short term effects?