Write a blog that hyper-links your research on the characters in GGRW according to the pages assigned to you. Be sure to make use of  Jane Flicks’ GGRW reading notes on your reading list.

Coyote is a famous Trickster figure in Native American tales, and is often seen as one of the First Peoples. Coyote begins the novel when the world as we know it is unformed.  He is often seen as one of “a race of mythic prototypes who lived before humans existed. They had tremendous powers; they created the world as we know it; they instituted human life and culture—but they were also capable of being brave or cowardly, conservative or innovative, wise or stupid” (Flick citing Bright).  King’s version of Coyote seems to be at least innovative and wise, allowing Dream/Dog its fantasies.  The role of trickster also seems to be controversial in this novel, as Coyote’s mischievousness is done with the intention of fixing the world. Coyote does not verbally interact with the modern characters, but is on conversational terms with the narrator and four escaped Native Americans.

There are some that argue King’s Coyote is female, based on his story “The One About Coyote Going West,” published in the same year as Green Grass, Running Water.  This would make the creation story followed in the novel, and the references to Genesis seem of even more importance, as Coyote (female) existed and dreamed up Dog/GOD (male).

This character is a contrary who “has everything backward” (King, 2).  A dog is a more tamed, “lesser” relative of a coyote, while GOD is “dog” backwards.  Dog/GOD begins as a dream of Coyote’s that wakes Coyote up before the beginning of the world.  This character thinks itself very clever, while Coyote and the narrator find the new creation to be silly and backward.  Dog/GOD is a creation of Coyote, which would be more interesting if Coyote were indeed a female character, as Dog/GOD seems to uphold the Christian narrative of the story (therefor a female being would have created “GOD”).  If Dog/GOD is getting everything backward, this would cause the Genesis story to be backward.  The particular page selection I chose for Dog/GOD (38-41) features the First Woman story as Dog/GOD attempts to interrupt and interject into the narrative to provide the Genesis story of events.

First woman is a common story among North American people.  First Woman falls from the sky and lands on a world covered with water.  She makes an island on Turtle’s back and on this island she creates a garden.  This again eludes to Genesis (Eve) and the Garden of Eden, except we again have a female creator. First Woman is also the character known as The Lone Ranger, the hero of Western books, radio, television and movies, with a faithful companion named Tonto, who is Ahdamn.  Flick, in her “Reading Notes for Green Grass, Running Water” explains the Lone Ranger as a “a Do Gooder. The Texas Rangers myth has it that one ranger could be sent to clean up a town”.  Thomas King’s interest in the Lone Ranger also extends to photography, where he shoots Native Americans in a Lone Ranger mask

The counterpart to First Woman, Ahdamn lives with First Woman in the garden, his origins unknown to the narrator (as opposed to Genesis, where Eve is made from Adam, and Adam is created by God).  In the section of the novel I chose, Ahdamn is attempting to give names to the creatures in First Woman’s garden, and is failing.  This scene is done by making fun of Ahdamn, but it is also curious that the animals in the garden seem to already know their names, and this is in part why all the names Ahdamn suggests are ridiculous.  It is interesting that the two male characters of Dog/GOD and Ahdamn are trying to control the creation story/control creation, but it is the female characters of First Woman (and possibly Coyote) who have the power to create.  This bid for power seems important in the context of the Garden, as we have the male creation power of Genesis/Christian belief vs the female power of Native American story/First Woman. 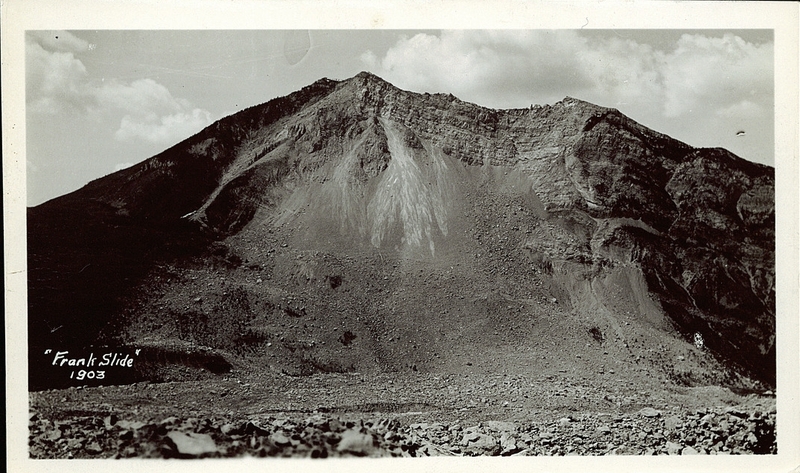 Alberta Frank, a professor teaching Native American history, is the primary female character in the modern world part of the novel.  “Alberta” suggests the province of Alberta where the story takes place, while Flick suggests that the character herself is frank.  The name Frank could also allude to the town of Frank, Alberta.  The town was subject to a major disaster, buried by the famous Frank Slide of 1903.  The slide came off a mountain called Turtle Mountain.  Given the significance of Turtle in the novel, this does not seem like a coincidence.  Her name could have been meant as foreshadowing for the crisis in her life.