A student sidles up to me to show me how to write ‘hello’ in characters. Another student shows me how he has copied a word in Arabic from the original written by his mother. Since starting to introduce language activities in the classroom, I have noticed that students are much more forthcoming with their mother tongues, especially when they see that I am genuinely interested in hearing them. On several occasions, students have shared pieces of their culture or mother tongue without being prompted, much to my delight.

As this happens, I’ve found myself facing situations where monolingual students feel left out. Activities are always inclusive, where students are encouraged to learn from their peers, or an online translator, but I have felt that at times those who only speak English feel disadvantaged. Earlier in my inquiry, I had been focusing on bolstering confidence for ELLs. I find it interesting that the tables have been turned for me in this sense.

In the end, my objective is to lead by example as an avid language learner. As seen in “Adult Learners’ Perceptions of the Incorporation of their L1 in Foreign Language Teaching and Learning” by Kimberly Anne Brooks-Lewis, leading by example when it comes to learning languages can be a powerful tool. For those students who might feel insecure about the fact that they speak only one language, I hope that they might look to me as an example. If I am able to convey a sense of curiosity and positivity, then students might start to think that it is possible to learn another language if one has the right attitude.

Wading into the depths of practicum, I am challenged to find ways to integrate my inquiry with my practice. This has taken shape in trying to integrate students’ mother tongues into the classroom, as mandated by the International Baccalaureate Primary Years Program (IB-PYP). As my teaching load increases, my perspective on this issue is starting to change.

In a meeting of all the PYP teachers at the school, it came to light that in a recent accreditation evaluation by the International Baccalaureate Organization, the school had received several recommendations to improve the integration of mother tongue into classrooms. Interestingly, some of these recommendations were repeated from a similar evaluation done six years ago. My initial thought was: is it really so hard to bring students’ other languages into a school? I believe that one might argue both yes and no.

Although I knew that my class was both culturally and linguistically diverse, I wasn’t exactly sure to what extent before starting my long practicum. The results (see below) were impressive. More than half of the class reported that they speak at least one other language in a data-collecting exercise. 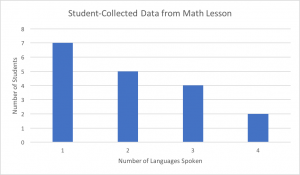 Encouraged by this, I triumphantly began to plan some class activities that would take advantage of this rich linguistic resource that the students brought to school. I had the support of my school advisor, who added that she wanted to see more integration of mother tongue in the school, with the specific example of the upcoming PYP Exhibition, in which she would like to see students be able to present their projects to their families in their mother tongues.

I then began to include a few simple language activities in the mornings. The first was a raffle where students were asked to write the name of a fruit in another language and enter it into a draw. I would then choose one word every week to be the ‘magic word’ that I would use when giving instructions. Those students who did not speak another language were encouraged to look one up, use a word from French class, or ask a classmate. The ensuing discussion and engagement in the activity was surprising; some students showed obvious pride and enthusiasm when talking about their language or dialect and were eager to share. Another morning, students were asked to do a math problem in another language, with similar results. In this small way, other languages are making their way into the classroom, and hopefully these small steps can lay the groundwork for more significant integration in the future.

As I move into taking on more of a lead role in the classroom, the reasons why mother tongue integration might be overlooked start to become obvious. A teacher has fifty other equally-important considerations to be conscious of on a daily basis, be it Social and Emotional Learning, making a classroom Gender-Inclusive, or integrating First Peoples’ Principles of Learning. It is completely understandable that the inclusion of mother tongues might be eclipsed by these. I hope to be able to make students’ other languages a daily part of the classroom, and accept that it may not be as easy as I had initially thought. 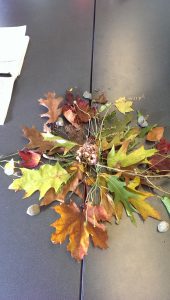 Yes, you guessed right, it`s a Nature Mandala! This was another fast-paced week. We had a lot of fun in the Pacific Spirit Park with our PE group teach, and in classes as well. I had a great second day at my practicum placement, where I found my class super focused and eager in our Unit of Inquiry. I also got the chance to sit in with them in music class, which was a treat. I found the teacher very entertaining and saw how my students behaved differently in a new setting. Other highlights of the week were great discussions in the development class, and some positive feedback on my language learning assignment. 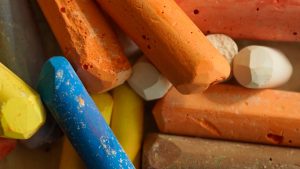 This week was the start of my integration into my practicum school! My first day in class was a lot of fun, my mentoring teacher and students were extremely welcoming and I had a lot of fun. We spent a lot of time introducing ourselves and my mentor teacher had all the students write down three interesting facts about them on sticky notes, so I have lots of material to study for next class. I`m still not entirely clear on how the teacher runs the classroom, and I`m unsure of a lot of the IB concepts as well, but I believe it will take some time. It has been a great start. In other news, we had a fantastic gym class this week, we had a wonderful session on Inventing Games. Also in our French class we started to think about using literacy strategies in FSL learning. After some Thanksgiving turkey, I`ll be back with a vengeance next week! 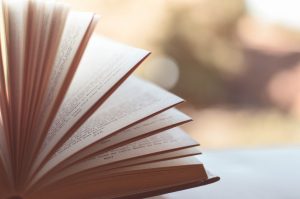 And now let’s get down to business! Week two is here and we are jumping into the deep end, pencils and textbooks in hand. We are preparing our first Group Teach assignments for next week and are tackling some interesting readings. We had some eye-opening discussion about Jean Piaget’s theory of Cognitive Development, and how his concepts are so embedded in education today. We had to think about questions of how we learn, how we measure learning, why we are grouped with students of the same age in schools, and the list goes on. Lots of introspection and reflection, broken up by the occasional flash mob. 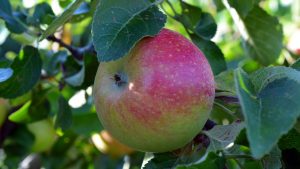 My first week in the UBC Teacher Education Program has been a fun-filled blur. All of the instructors are excellent and can support us through their varied backgrounds and expertise. Highlights of the week were some great games in our Physical Education course (we did a hilarious fitness bingo activity in our first class) and we had a beautiful afternoon full of ice-breaking at Wreck Beach. The weekend will serve to get up to date on readings and then back to school on Monday!