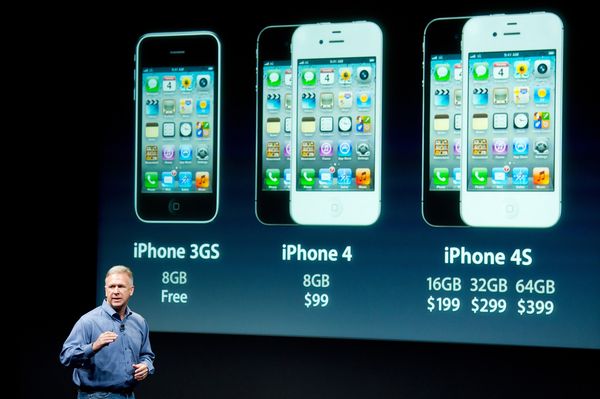 The consumers along with shareholders of apple have been waiting for the iPhone 5. Unfortunately it just isn’t here yet. Despite the fact that apple has had 16 months to prepare their new phone rather than creating what Job’s would call another revolution Apple has manifested a small scale evolution of an existing product. It seems Apple is attempting to replicate the marketing success of iPhone 3G and iPhone 3Gs.

The new iPhone 4 S  which was announced today includes the following evolutionary hardware modifications: A5, the same 1GHz dual core processor as the one in iPad 2 and an 8mp HD 1080p Camera. The prominent software modifications include a new iOS 5 and Siri.  Siri is basically an artificially intelligent life assistant. You can actually ask Siri aloud if you should take an umbrella with you today, where the closest ATm is and verbally command your iPhone 4 S to send messages and make phone calls. The iOS 5 does not seem to have any outstandingly new features.

What else is new? That’s about it. Not surprisingly shareholders were not impressed since the whole world was primed for iPhone 5. Most OEMs including Sony, Nokia, Samsung and Motorolla have already equipped their phones with 8 to 12mp cameras, dual processors and powerful displays prior to the release of this new iPhone. How will this effect Apple’s reputation? Will this be Apple’s first in a while marketing “slip”? Let me know what you think.

2 thoughts on “iPhone 4s is out… Looks like shareholders and consumers will have to wait for iPhone 5.”