There is no doubt that Japan is an earthquake country where there are around 2,000 earthquakes that occur every year and minor tremors could be felt on a daily basis and just recently on 26th September 2017, a 5.8 magnitude earthquake occur 55km from Kuji, Iwate Prefecture. During the nineteenth century, an interesting earthquake symbol arises from Japanese folklore where a catfish, Namazu whose movements were capable of causing an Earthquake. Fortunately, the demigod Kashima keeps Namazu under control as he keeps a huge magical rock over the catfish and as long as Kashima maintains this position, there will not be an earthquake. However, when Kashima lets his guard down, Namazu trashes about, causing violent earthquakes. The Namazu folklore originated around Lake Biwa and later spread to the Kanto region, where it likely made it first explicit appearance in 1592, but the link between earthquakes and catfish were not common until the late seventeenth century. 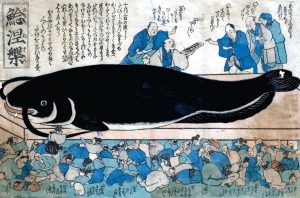 Fig.1. Japanese wood-block print showing a mythic catfish that causes earthquakes. Private collection, Berkeley, California. Courtesy of Ms. B. Bolt. (figure from KOZAK & CERMAK 2010). The depiction shows that the catfish is redistributing wealth from the rich people to the poor people. There are a few modern appearance of the catfish in emergency earthquake symbol, songs, games and television shows. Pictures of catfish on early warning devices are used for the Earthquake Early Warning (EEW) by the Japan Meteorological Agency. There is also association of catfish and earthquakes in the game ‘Pokemon’, where a pokemon named Whiscash which resembles a catfish that uses earthquake as its signature move. 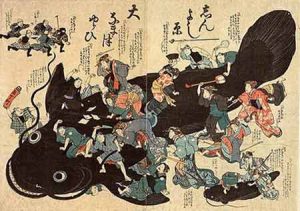 Fig.3. Namazu is attacked by peasants and concubines after the earthquake of Edo (modern Tokyo) in October 1855 (image in public domain)

Namazu history and its symbolism

The origins of notions such as the catfish causing the ground to shake, floating islands supported by giant aquatic creatures and the pictures of gods and immortals riding on giant fish that looks similar to a catfish can all be traced back to China.There are various versions of the myth with slight modifications, in which Kashima uses a sword to nail Namazu onto the ground instead of a rock.

It was believed the during the 19th Century and after the October 1855 Earthquake, Namazu causing the earthquake became more of a punishment of human greed as the havoc caused by Namazu forced the people to redistribute equally their wealth with everyone. Kashima and Namazu were popular topics in Japanese paintings, when they were used as talismans during the Edo period to prevent serious earthquakes from occurring. Images of Namazu are still around today, as seen on digital warning devices produced by Japan’s Meteorological Agency. 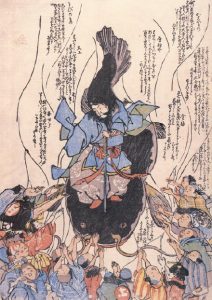 A version of Namazu controlled by Kashima with a sword (figure from Wikipedia).