A weekend in Istanbul

As nice as the Koc campus is, we can all get a little lazy when it comes to taking two buses and a metro to be in Taksim (downtown). So this weekend three other girls and I decided to find a hostel and stay in the city centre.

We stayed at a really nice hostel called Neverland, full of bright paintings on the wall and signs saying social justice slogans like “It’s just asylum, give it away.” I loved it. The neighborhood was really nice too, we found a nice little place to eat nearby and it was definitely walking distance from Istiklal, the main street.

Istiklal is something wroth seeing. It’s huge and always crowded, kind of like Vancouver during the olympics – except every day. At any time. I mean 4 in the morning and still crowded. It’s like you’re in a school of fish and if you try to walk on the wrong side people will hit you from all sides and not even realize it. It’s also always decorated with lights like it’s Christmas, which I find very funny because Christmas is not even celebrated here!

All around Istiklal there are little streets that brach out and become dead-end labyrinths, and exploring them is basically what we did all weekend. We found an amazing area with tons of vintage clothes stores, had delicious minty lemonade and walked into a homemade turkish vegetarian food place!!! it was AMAZING.

On Thursday we (they) had fish by the Bosphorus, on Friday we got lost in second-hand stores, on Saturday we saw the most amazing view of the city at night from the Galata Tower (the oldest tower still open in the world!). We danced all night every night- and even found a latin club that will be seeing lots of me from now on!

Last weekend we went to Cappadocia and saw crazy rock formations with houses built into them, next weekend we’re heading to Izmir to see one of the best preserved ancient greek-roman cities, Ephesus. In November I’m spending 10 days in Lebanon. Classes are good, even my Turkish is slowly improving. Go Global, I love you. 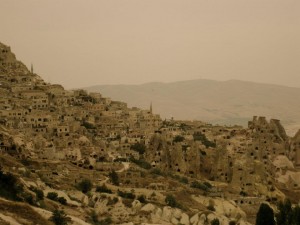 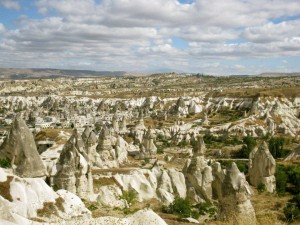 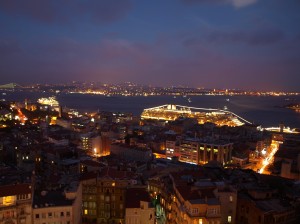 View from the Galata Tower at night 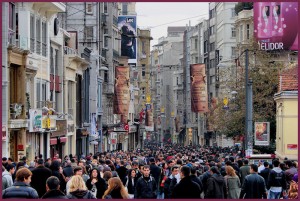 I'm a fish in Istiklal 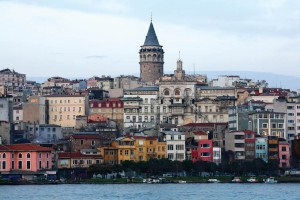 This is where we eat

I'm from a small and beautiful town next to a big and amazing lake in Guatemala.
View all posts by Valentina →
This entry was posted in Turkish Delights, Uncategorized. Bookmark the permalink.

1 Response to A weekend in Istanbul