The first game of manhunt in the newyear will be tomorrow (Wednesday) after class at 6:30. If you want to play, try and make it down to the front of Burrard Skytrain Station at 6:10.

Also, I wanted to bring up the classic 1993 Super-nintendo game “Shadowrun” as its gameplay is very similar to Neuromancer. In the game you play as Jake Armitage, a mecernary who uses a Cyberdeck to hack into the matrices of corporations. You can hire other shadowrunners or henchmen to back you up as explore a decrepit Seattle filled with armed cyberpunk gangs. Similar to the  “Necromancer” in Neuromancer, Shadowrun is filled with mystical/magical elements as the plot details a future where magic has returned to the world, and the opening scene in the game is your character being assasinated in the street then revieved from the dead by a shapeshifting lupine figure. Anyway, now that I think about it, I can’t believe I spent a portion of my childhood playing this wacked out game! Its seriously awesome…

Oh, and heres that youtube video “They’re made out of meat” (an adapatation of the Terry Bisson shortstory)  that was brought up when we were discussing the notion of post-humanism and the name “Case” in Neuromancer. 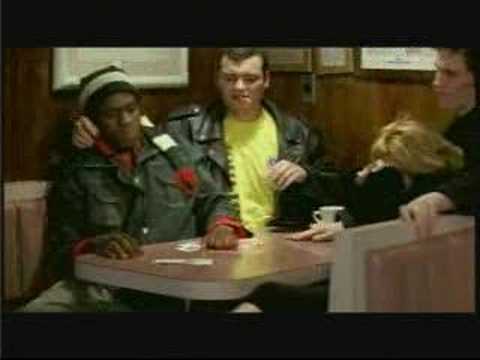 In Ballard’s novel High-Rise, he writes, “She referred to the high-rise as if it were some kind of huge animate presence, brooding over them and keeping a magisterial eye on the events taking place. There was something in this feeling — the elevators pumping up and down the long shafts resembled pistons in the chamber of a heart. The residents moving along the corridors were the cells in a network of arteries, the lights in their apartments the neurons of a brain” (1975, 40).

Ballard’s imagery dissolves the distinction between the interior/exterior and organic/inorganic. Mental and bodily inner-workings become superimposed upon the (built)landscape and vice-versa. This way of thinking about the contemporary human experience leads one directly to the concept of the cyborg. According to Donna Haraway, the cyborg is a hybrid creature “compounded of special kinds of machines and special kinds of organisms appropriate to the late twentieth century” (Gandy 27). In an age of “dematerialization … driven by the spread of informatics, increased capital mobility and the fracturing of place-bound identities”, the human experience has increasingly extended itself into new spaces of digital/virtual realms (Gandy 35).

The rapid co-evolution between social and technological systems produces new relationships with the built environment described as “cognitive scaffolding” and “distributed cognition”. Cognitive scaffolding refers to the short-cuts minds use when relying on the external environment to subsidize the processing of information; paper and pencil as external calculators, cellphones as memory, landmarks as distance signifiers, and subway color schemes as orientation devices. The concept of “distributed cognition” builds on these subsidizing mechanisms and represents a more radical environment where the boundaries between sentience and non-sentience is broken down as human agency becomes obscured by the myriad networks of information being processed by teams of organic/inorganic systems. On an individual level, such distributed cognition happens with the increasing prevalence of wearable computers, sensory augmentation, wireless devices, and thought-controlled prosthetics. At the urban scale, distributed cognition is exemplified in an early stage by characteristics of post-industrial global cities, where a traditional utilization of material exchange has become supplanted by the information exchange. The driving processes in cities such as New York, London, and Tokyo is the knowledge sector, composed of highly specialized services such as finance, insurance, real-estate, and law firms. Such cities are command points for the organization of the global economy and their very success depends on their extensive and autonomous integration with global markets in the form of digitized financial information.

Whats interesting to me is the uneven and patchwork nature of the trajectories of the urban/mind/tech hybrids. The wider landscape of material neglect and social polarization which characterize post-industrial urban spaces reveals the intrinsic social forces of unequal power relations, marginal spaces, violence, and social exclusion which shape the way urban and technological progress unfolds. This unevenness is important to note when exploring the suggestive tomorrows painted by techno-futurists, as the undifferentiated “we” of futurist urban literature overlooks the infrastructural crisis of a billion plus people living in slums. The cyborg concept produces useful insights into cities as components in a global-hierarchical information system and urban dwellers as technologically-enhanced urban citizens, and these insights should be seen as grounded in the geographical particularities of places. In this light, the cyborg concept helps illustrate “the hybridized socio-ecological relations that underpin the production of space” (Gandy 37). These hybridized relationships are producing vastly disparate spaces across the world, fostering unique trajectories in the evolution of the human psyche which may fracture across familiar socio-economic divides. The notion of a breakthrough in the body-technology nexus propelling humanity into a post-human realm becomes more of a question for who and where?

Gandy, Matthew (2005) “Cyborg Urbanization: Complexity and the Monstrosity in the Contemporary City”. International Journal of Urban and Regional Research Vol 29.1 (26-49)