Want to get in on all the action tonight? We just decided to liveblog, see after the jump.

Watch The Ubyssey’s livestream of the meeting here.

Background info on everything Gazapalooza is right here on AMS Confidential.

But DON’T FORGET! We have an extremely exciting activity: Gazapalooza BINGO!

That’s right. Simply click here, REFRESH the page, and keep a tally! Once you get five in a row, if you are the first person to stand up and yell SHENANIGANS! then you will win a pitcher of bzzr courtesy of AMS Confidential <3

Like what we’re doing? Please go vote for us now so we can get funding, which allows us to give you prizes like bzzr!! 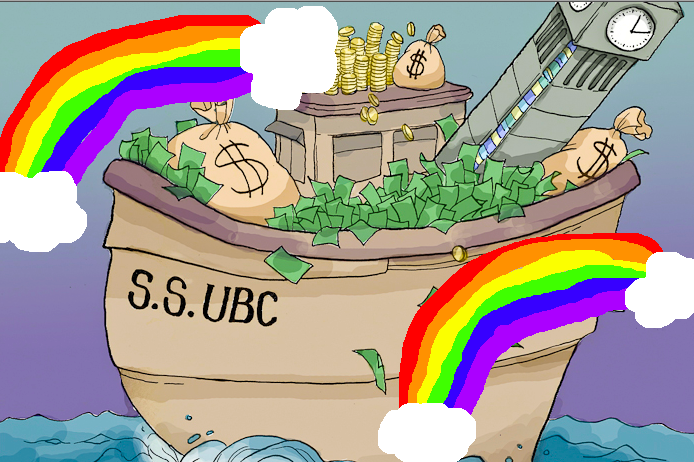 And now, for the liveblog-

6:45pm We still haven’t started. We are debating the video recording…Ubyssey motion passes, Vancouver Media Co-Op motion passes, and Jonathon Lerner (formerly involved with IAC) motion has contention. Michael Haack doesn’t feel comfortable with a private person filming, another person says his girlfriend is Jewish, it’s Hanukkah, and he wants her to watch it. The Jonathon Lerner motion fails.

6:52pm “Council is kind of like a drinking game, you can make up rules as you go along.” -Dave

7pm Presentation by the VP Admin on the SAC complaints. First off, there WAS an AGM. Secondly, SJC executives are elected in February and not March. The statement that the executive is illegitimate is not true. They are planning to have by-elections in January along with a SPECIAL MEETING ooooo.

7:10pm “According to the media I started everything” – Elin begins his presentation, including a slideshow of photos of Israeli and Palestinian leaders. The room suddenly gets awkward, this isn’t that funny. “I’m entitled to refer the judgment to Council…it’s my right to bring it to Council.”

The motion is the same one that was recommended in the legal opinion, Coles Notes version here.

Elin says the money is going to charity, not a terrorist organization.

“It wasn’t that we were scared it was going to a terrorist organization, I was concerned it was a PR issue.”

7:20pm The process goes like this: transfer of money from the SJC account to the SPHR account which is within the big bank of the AMS.

7:20pm Bijan: “the lawyers did not find it as a registered charity.”

The legal opinion mentioned another charity, there is now all this kerfuffle over what is a charity and what isn’t. Blah blah blah. The people overseeing the funds are registered charities of the PROJECT “Canada Boat to Gaza”

SJC is upset they couldn’t submit material for the legal opinion. “You need correct material in order to create a correct opinion.” – a law student.

Dave on the Q&A period: “You can’t come up here and ask ‘You are a jerk, did you know that?’ in the question period.”

BIRT the following motion be removed from the agenda as it is the VP Finance’s fiduciary and administrative duty to sign off on transfers without personal prejudict, and

BIFRT the Ams Executive write an open letter of apology to all students for alleging the Canadian Boat to Gaza is in any way related to terrorism, a fact easily verified to be false.

7:40pm “I don’t like the implication that Elin is required to just sign off on any cheque the resource group submits…we should be able to review them.” -Brian Platt, AUS President

A student submits a petition with 547 signatures calling for the donation to the Canadian Boat to Gaza and an apology from Bijan Ahmadian, AMS President.

7:44pm Michael Haack’s motion (see above) fails to make it on the agenda. We’re back to the original motion now.

this is enough signatures for a referendum

7:47pm “We sign a lot of cheques…and try our best to not send them to any terrorist organizations.” -Elin Tayyar.

The debate should be on whether the SJC should transfer the money to SPHR, and whether they have autonomy. “Please don’t mention terrorism again” -Elin

Now they are amending the motion so that the final recipient needs to be a charity recognized by CIDA to make sure that all council members are protected against being jailed, to make sure that it is going to humanitarian aid, and then the funds will go through.

7:57pm The IAC is dressed in suits. The SPHR are looking hipster.

8:06pm Things are getting heated in here. Everyone is saying the same thing over and over. Blahhh

8:08pm Naylor cuts off a speaker with a point of order, quite loudly. Why didn’t we put Naylor on the bingo?

8:11pm “the purchase of a boat is not eligible for charitable tax receipts” – turns out Alternatives is a registered charity, who will be giving the money to Turtle ____, which is a registered NPO, who will then be purchasing the boat.

8:22pm People are cheering, booing, and not making sense. Blah.

“As long as you want to make it a political…stunt.” -Katherine Tyson

8:25pm “It’s not going to create unity and happiness on campus” – Dylan Callow. He is willing to give humanitarian aid to Palestine right now but is uncomfortable giving it to the Boat. “It may jeopardize our careers.”

8:29pm Question has been called, debate is now over on the amendment to add CIDA, etc into it.

8:31pm Council fails the amendment, the executive is split on it.

8:40pm “Alternatives was de-funded from the government in 2010 because they didn’t match CIDA’s priorities.” – This kind of changes everything, again.

8:43pm Iggy Rodriguez is presenting an amendment which effectively makes it so that Council isn’t really making the decision. People who are for/against the transfer can run and vote at the AGM and therefore make it some mini referendum on the transfer.

8:51pm Sean Cregten goes up to the mic, deems this all silly, and then calls bingo. Amazing. He was doing a different bingo than ours though 🙁 Shenanigans! is still in play

8:58pm “if he chooses to use his voice to say bingo, that’s his choice. he has as much democratic right as anyone.” – Dave when the IAC people are upset that their time was used for Bingo.

8:59pm the amendment about the February AGM failed. Back to the main motion.

9:07pm NAYLOR IS UP. He is disappointed in the ExecComm for asking for a ridiculous legal opinion that cost an order of magnitude more. Code does not guarantee them autonomy from Council. He also calls for a Disabilites Resource Group to be passed in the next year.

9:12pm There’s a reason we’ve never done a liveblog before. It’s quite boring.

9:19pm there’s another amendment, this time to postpone indefinitely. This means that AMS Council won’t debate this anymore, the decision will fall back to Elin. AKA Council wusses out.

9:22pm The motion to call to question passes. The legal motion to transfer the money to SPHR passes. Bijan and Brian Platt are against, along with 8 others and 7 abstentions.

2 thoughts on “Live at Gazapalooza!”