This is a guest post by Chanchan, a new contributor.

My name is Chanchan.  My favorite things are ramen, Chanel bags, and rhinestones.  I have been told I am as shallow as a kiddie pool, but I say that while beauty is skin deep, ugly is to the bone.  Now that’s deep.

While we’re on the topic of shallow, have you seen some of these posters…? Yiiiikes. We like pretty things, so we recommend that you shield your eyes.

Click read more only if you can handle it 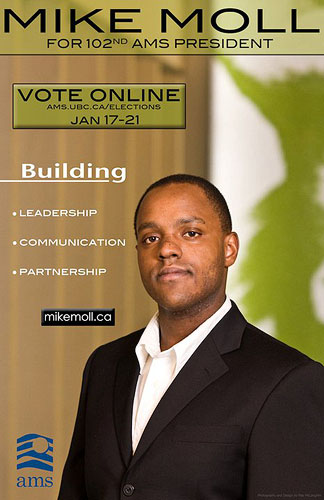 Michael (Mike) Moll
Good thing I picked last week for my annual Ubyssey reading, otherwise I wouldn’t have known a single thing about you from your poster.  Though the lack of rambling text is refreshing against the sea of text-heavy posters, you can’t really afford that if only some know who you are, and even fewer feel like finding out.  The lack of tie (“but you’re in Commerce!”) is honestly the first thing I noticed after I found out you were a Commerce student.  As someone who has spent four years amongst the sea of suits, it just seems plain strange to see a lack of neckwear. Jeremy McElroy
The darker colors and disembodied beard and tie give a certain sense of foreboding to your poster.  Not sure if this is a sign of an impending dictatorship or a poster emulating times of war (and no, I don’t mean the War on Fun.)  At least you’ve been making a name for yourself in the AMS these past few years, otherwise then, I would’ve had the same complaint about your poster as I did for Michael.  Speaking of making a name for yourself, why the uneven bolding?  You’re never going to be as edgy as Elin. And even if all of your graphics look like you ripped them off of Microsoft clipart, I do congratulate you for not putting a picture of yourself up.  Why waste all that ink anyways?

Omar Shaaban
Since you’re having an identity crisis/trying to bury a history littered with off-colour quotables, I’ve decided to merge your two names in order to further confuse people like me.  You know, the ones that don’t really care and are specifically targeted as a market every election, though it seems little is actually done year to year… but I digress. I haven’t actually seen a poster of yours, probably due to the whole (dis)(re)qualification fiasco, so you’re mercifully exempt from the scrutiny. Elin Tayyar
Tell me, do your hipstery ways get in the way of everyday life?  There is so much “edgy” text placement going on, I had to whip my head (not hair, unfortunately) back and forth to read your silly text… not that I could, since I got distracted by the graph paper motif.  Your tie, though tasteful, is as skinny as the placket of your shirt.  It makes you, too, seem skinnier than your average hipster.  Will you disappear if you turn to the side?  I think it would be a great method to evade the SJC.  One last thing, were you pretending you were on The Sartorialist when you took these pictures?  Don’t bother.  Your pocket square looks like a napkin. Arash Ehteshami
Besides the fact that it looks like your shirt was embroidered with the AMS logo by a blind person, your picture is relatively amazing!  Unfortunately, the key word is relatively.  It’s also boring.  I do give thanks, however, for the fact that you are not trying to be in an American Apparel catalogue, nor are you glowing with the power of a thousand suns (unlike a certain VPX candidate)… in fact, you appear quite wholesome and happy. I am also impressed, however, that you managed to pull off white text on a light background… I only had to squint half as hard to read it.  Photoshop is your friend, but so are colors.  Use them. Katherine Tyson
I don’t understand why you’re glowing.  You don’t suffer from Asian Glow ™, nor are you particularly luminescent in real life.  I guess someone really loves Photoshop filters.  Either that, or you have a skin condition that results in literal glowing.  You should probably go consult a medical professional.  On another note, the overall color scheme might make one think you are campaigning to become Head Girl of Gryffindor.  (I know it’s not a voted position.  That’s beside the point.)  Speaking of Gryffindor, I don’t think that your hair in real life emulates Ginny Weasley either, so you might want to fix that.  I congratulate you on your ever-present power suit though.  I am sure your collection rivals, if not, exceeds, mine. Rory Breasil
And on the other end of the spectrum… looks like someone has been taking art lessons from a three year old who barely knows MS Paint.  I refuse to recognize your alternate poster, due to the lack of election dates.  The fact you have little on this poster leaves me little to comment on.  I guess you’re banking on people recognizing you from your intense forehead wrinkles of thought.  Your photo, while slightly less boring, is also extremely cliche.  Artsy cropping?  Please.  I’ve heard great things about your “Suits Suck” t-shirt, so why is that not here?  At least it’d give me a laugh, rather than the current agony of MS Paint.  FYI, MS Paint belongs in the seventh circle of hell. Mitch Wright
I don’t think there’s enough room on AMS Council for two hipster-esque boys.  That rakishly loosened tie and scarf would send any self-respecting Urban Outfitters devotee (oxymoron, I know) into a frenzy.  But let’s talk type.  Your gradients and futuristic fonts give me the feeling I should be voting for the future leader of the Confederacy.  There’s a lot going on – different fonts, different colors, oddly skewed placements – but what I’m really drawn to are the weirdly red trees.  They look like their bleeding to death, possibly from the Photoshop grief that they’re being subjected to.  Don’t get me started on your “black and white with accents” theme… that’s so 2008.

On a secondary note: there should probably be a buzzwords drinking game.

Still to come: everyone else that’s still running in this extended race.