The CAP Conference: Public Spaces, Social Movements and the Internet

During the CAP Conference, I was amazed by the wide range of creative work presented by my peers in the Global citizens stream and the other CAP streams. Watching their presentations and their interdisciplinary contributions to knowledge from lenses as varied as Sociology, Political Science, Psychology and Geography proved to me just how much we had all achieved in our time as CAP students. Although I was impressed by the showcase work in the conference, I really enjoyed watching the panel presentation “Occupying Media: Public Space and Arendt” by the PPE students Tess Cohen, Marina Tischenko and Gareth Chevreau. In particular, I thought that Marina’s presentation on the Occupy movement in Vancouver brought up many of the topics we had discussed in the Global Citizens stream. By comparing the use of public spaces in Ancient Greece with that in the 2011 Vancouver Occupy movement, Marino showed just how much the character of public spaces for political discourse has evolved. According to Marina’s research, while public spaces in Ancient Greek used to confine protests and political discourse within specific locations (usually in buildings), now public spaces are increasingly porous, allowing rapid shifts of individuals across space. Therefore, the disruption of a particular area by officials does not necessarily shut down the entire movement, as individuals are now able to congregate in a vast range of settings- in streets, parks, and other open spaces where their voices can be heard. 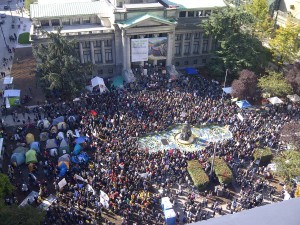 Yet, as Gareth Chevreau points out in his presentation, rather than being restricted to physical localities, social movements are now increasingly coordinated in cyberspace, particularly in social networking sites such as Facebook and Twitter. I thought that this tied in nicely with our discussions in Sociology about how information technologies are increasingly facilitating connections and coordination within social movements, while also producing new ‘virtual’ social movements. In our digital age society, these “spaces of flows” (to use sociologist Manuel Castells’ term) are becoming the main platforms to receive up to date information about the development of the protests, to freely express opinions about the movements and to mobilize large masses of people. 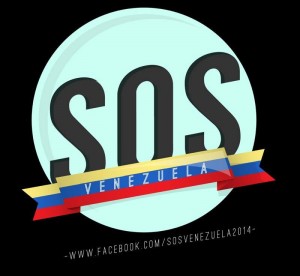 Nowhere has it become more clear to me than in (1) my Facebook news feed, and (2) the Facebook public pages on the Venezuelan protests. Given the turmoil in Venezuela at the moment, my family members and friends in Facebook have been frantically posting links to news articles and Youtube videos- mostly videos showcasing the repressive and violent actions of the government, but also quite a couple of hilarious videos mocking the president. Meanwhile, Facebook public pages such as “SOS Venezuela” have been posting the times when protests are expected to take places in cities around the world and providing information about the ongoing situation in Venezuela. Returning back to my earlier point, I think its significant to note how these budding virtual networks are influencing how individuals come together into collectives to advocate for social change. However, I think that it is best to see these technological systems not as separate from physical urban spaces, but as intersecting with them so that they collectively contribute to the creation of socio-spatial meanings and provide the grounds for social movements to take place.

Seeing as this is my last ASTU blog post, I just wanted to end by thanking everyone in our class, you guys have made this year a great one! (: