NEW: Our report, “Beyond the Gap: Placing Biodiversity in the Global Economy” was just released. Read more about the report below:

“Facing decades of inaction on multilateral agreements and goals, there is 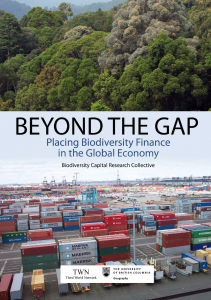 growing consensus that “transformative change” is needed to address the ongoing biodiversity crisis. But what must be transformed? Governments and conservation organisations often point to a large gap between existing financial resources and the resources needed to achieve biodiversity objectives. But the gap is almost always presented without context, as though biodiversity loss will be resolved through increased funding alone. To illuminate crucial pathways for transformative change, this report examines the political and economic dimensions of biodiversity loss.

“Beyond the gap: placing biodiversity finance in the global economy”, a joint effort between an international team of researchers and Third World Network, addresses two questions: how does the organization of the global economy drive biodiversity loss, and how has existing biodiversity finance performed? Trade, investment and financial regulation (or lack thereof), global economic pressures that push biodiverse countries into debt, and inequality across racialized, gender, class and colonial lines, all drive biodiversity loss and require urgent attention. These issues are not usually considered in international environmental negotiations; this report demonstrates why these structural patterns must be addressed if we are serious about changing the current trajectory.”

Conservation finance, private equity funds, land and rainforest bonds: all are attempting to “unlock” the supposedly trillions of dollars waiting around to finance the global environmental agenda. Such hoped-for funds are – in theory – meant to address the brutal realities of ecological degradation: the earth is becoming less lively, less colourful, less diverse. In what now goes under the label conservation finance, there is a growing alliance of financiers, asset managers, NGOs, and international institutions eager to find ways to make biodiversity conservation a successful and attractive financial asset. Governments and organizations around the world have started to incorporate for-profit conservation finance and impact investing ideas into their environmental, social and development policy, keen to direct private capital in the direction of conservation efforts.

This research project will help practitioners, policymakers, and scholars understand how financialization might be changing biodiversity conservation efforts and how, or if, these practices create profits. Will these new financial mechanisms succeed where previous schemes have not? If these conservation investments continue to fail in return-generation, what will happen to them? Will non-profit organizations or governments step in to save them, or, are we entering a phase of “start-up conservation” where projects will be tested, discarded and tried again, as in the venture capitalism of Silicon Valley?

Read more about this project.