In this research project, we are tracking the development and implementation of three different commercial enterprises that aim to deliver returns to investors while also producing ‘returns’ to nature in Kenya. Our research is guided by three overarching questions. First, what challenges do for-profit biodiversity enterprises face in developing business models, then implementing those ideas? Second, how are different interests between actors, up-and-down the investment chain, negotiated? And third, is this model of biodiversity conservation working, both in individual enterprises and as a model that could be exported elsewhere? In order to answer those questions, we have been tracking three biodiversity enterprises that have raised money from profit-seeking investors.

The three businesses in our study differ in their governance, the products that are meant to create returns for investors and incentivize changes to land uses, and the degree to which biodiversity entrepreneurs prioritize social, environmental, or financial returns. First, Wildlife Works Conservation is a long-running conservation project adjacent to Tsavo East National Park. Wildlife Works has long operated with a revenue generating component, employing local people to produce goods like textiles and handicrafts. In recent years the emphasis has shifted to the production of REDD+ carbon offsets, initially on 80,000 acres owned by WWs itself on its Rukinga Sanctuary, and now expanding onto other private and communally owned lands that connect Tsavo East and Tsavo West National Parks. This expansion is being made possible by international investment, which is meant to be paid back from carbon offset revenues, revenues that are also meant to be dedicated to anti-poaching measures and pay local dividends in jobs and social programs. 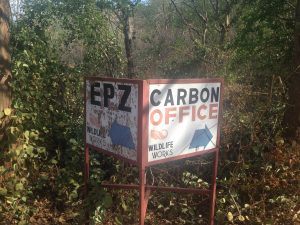 The second biodiversity enterprise is a spinoff of the Northern Rangelands Trust, a non-governmental land and conservation governance organization, and invested in by The Nature Conservancy’s investment arm. Northern Rangelands Trust-Trading, as the company is known, acts as a cattle trader for pastoralists who graze their livestock on lands under the Northern Rangeland Trust’s jurisdiction. The business purchases cattle from communities who have complied with Northern Rangeland Trust conservation and governance guidelines, and then fattens the cattle to sell on domestic cattle markets, creating return that can be reinvested in purchasing more cattle. The proposed biodiversity “return” stems from the compliance with NRT guidelines and smaller herd sizes.

The third enterprise we are following is somewhat different from the other two, as it foregrounds economic development more than conservation. Komaza aims to be the ‘uber of forestry’, first in Southeastern Kenya where it is headquartered, and eventually across Africa. The model is based on distributed eucalyptus and melia micro-plantations. Komaza owns a nursey where saplings are grown, which are then distributed to small landholders across Kalifi province just west of Mombasa. Landholders are given saplings and receive instructions on their care. Komaza employees periodically check in on each micro-plantation, thinning plots and trimming branches. When the trees reach maturity, Komaza purchases the trees from the landholders, fells them, and then sells the timber. Komaza aims to be ‘disruptive’ to forestry in the Silicon Valley sense- producing an asset-light service that delivers incomes to Kenyans, ramps up timber production, and creates positive environmental outcomes that are meant to accrue when landowners see the monetary value of trees.

We made an initial field visit to all three biodiversity enterprises in 2016, with future research trips scheduled for 2020 and 2022. By taking this long-term approach to research in these businesses, we hope to shed light on the promises and pitfalls of making conservation investable even as the biodiversity crisis continues to worsen.