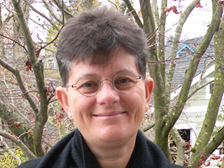 Dr. Gwen Brodsky is in residence at UBC Law this year as a Distinguished Visiting Scholar.  She is currently teaching Law 309C, a seminar on “Sexism in the Law as a Tool of Colonialism” in our JD program (Fall 2013).

Dr. Brodsky (LLB, Victoria; LLM, Harvard; PhD, Osgoode) is a leading national and international expert on equality rights and the Charter. She has extensive experience arguing equality rights cases before tribunals and courts, and has acted as counsel in leading cases in the Supreme Court of Canada, including Andrews, Swain, Mossop, Thibaudeau, Gould, Vriend, Meiorin, Gosselin, Keays, and Moore.  She has also appeared before commissions and treaty bodies of the United Nations and the Americas, and was the first Litigation Director of the Women’s Legal Education and Action Fund (LEAF).

For the past decade, Dr. Brodsky’s work has focused on the inter-connections between equality rights, social and economic rights, and Aboriginal rights, and on the means of fulfilling them in constitutional and human rights contexts. She is counsel to the petitioners in McIvor v. Canada, an ongoing challenge to sex discrimination against Aboriginal women and their descendants in the Indian Act, and represented the Native Women’s Association of Canada on the issue of the murders and disappearances of Aboriginal women and girls before the Inter-American Commission on Human Rights and at the Missing Women Commission of Inquiry in British Columbia.

Dr. Brodsky has written extensively about equality rights theory, social and economic rights, the Charter, the duty to accommodate, and access to justice problems experienced by members of disadvantaged groups. She has taught in the Faculty of Law at the University of British Columbia and in the Akitsiraq Law Program in Iqaluit.

If you wish to get in touch with Dr. Brodsky, her contact information while at UBC is as follows:

Statement on the Rape Chants at UBC

The Centre for Feminist Legal Studies (CFLS) is a research centre at the Faculty of Law, UBC.  Our purpose is to foster research, teaching and collaboration with the women’s movement on matters relating to law and feminism.  Our faculty members research and teach in a wide variety of areas relating to law and sex equality, including sexual violence and the law.

We are outraged that some members of the UBC community encouraged one another to repeat chants that trivialize sexual violence and colonialism.  We are saddened that this behavior was apparently repeated over many years and was considered by those who led these programs to be an enjoyable part of their introduction to university and to one another.

We are encouraged that the UBC administration has pledged to take these events seriously and to consider their implications not only for the programs in which they occurred but also for the entire university.  As an initial contribution to that end, we offer the following analysis and suggestions:

Sexual violence against women and girls is unfortunately commonplace.  While the exact incidence of sexual assault is difficult to measure, a conservative estimate is that at least 1/3 of women will be sexually abused or assaulted at some point in their lifetime.  Rates of sexual violence are highest for adolescents and young women.

Reporting rates for sexual assault are low.  Official estimates suggest that no more than 15% of sexual assaults are reported to the police.  When women do report they too often face police who treat them with suspicion and decline to lay charges, or prosecutors who refuse to proceed without corroborating evidence.  These and other systemic barriers mean that less than 1% of sexual assaults will result in a conviction or other legal disposition.

The women’s anti-violence movement has fought for decades for reform at the level of law and policy, but also to expose and counter the rape culture that relies on widespread impunity for sexual violence to normalize and trivialize it.  Specifically, the sexual assault of teenage girls is too often dismissed as “statutory rape,” only a technical crime rather than an act of violence rooted in inequalities of sex and age.  Men charged with such offences continue to argue in their defence that they believed the girls were older, ushering in the same old stereotypes based on young women’s appearance, dress and behavior.  At the same time, girls are eroticized through being classified as “jailbait” or, as in the UBC chants, as “tight.”

The basic principles of Canadian sexual assault law are clear.  Canadian law defines sexual assault as any sexual contact with a person who does not consent to that contact, or who lacks the capacity to consent.  Non-consent is measured according to the state of mind of the victim – if she does not want the sexual touching to take place, there is no consent.  There is no requirement of physical or verbal resistance; passivity is not consent in law.  The defendant must point to a communication of affirmative consent by words or conduct.  Consent must be contemporaneous; it cannot be given in advance.

The law also recognizes that where women lack the capacity to consent, for example through intoxication or disability, the abuse of a position of power, or where they are below a specified age (which varies depending on the age of their partner), this is also a sexual assault.  Sexual assault is a criminal offence with a maximum penalty of 10 years’ imprisonment.

We believe that all university students should be given a basic education that includes this information.  Students, and especially student leaders, also need to be reminded that many of the incoming students they “welcome” have already had direct experience with sexual violence.  We believe that students should be encouraged to develop a sexuality based in empathy, respect and non-violence rather than domination, conquest or humiliation.

UBC has a legal obligation to provide students with a learning and living environment that is free from harassment and discrimination.  Rape chants and racist chants are a form of discriminatory harassment.  UBC must:

We appreciate the additional analysis of these events, and in particular of the racist Pocahontas chant, by the First Nations Studies Program and the Institute for Race, Gender and Social Justice and offer this statement in solidarity with their efforts.