The New World was aptly named as a place where Europeans could escape from the rigid society rules they knew to a world where the rules were being created; and they could be a part of it! The promise of a new country, unlike their well-developed and structured one, promised an area that they could develop. The stories that went into the New World were ones that determine land is meant to be used for building and development.

Mary Rowlandson (who is mentioned in Green Grass Running Water) was a part of the Puritans who came to America to escape their own persecution. But in the process they persecuted those surrounding them because their own idea of a perfect world wasn’t followed by the Natives. This idea was a fantasy that ironically involved making the New World exactly like the old one with just some minor rule changes. Anyone who didn’t fit into British standards was discouraged from being a part of Canada. Both the Indian Act and Immigration Act are legislation that defined Canadian white civility.

The Indian Act permits the Canadian government to regulate registere
d Indians since 1876 including control over policing, registration, land, and restrictions. These restrictions are in place to ensure that the dream settlers had when leaving their homelands came true, but this led to regulating non-white cultures to the point of extinction.

The dream of the Mayflower ironically didn’t change much from Britain. The settlers took the buildings and structure of society for granted and took that to the New World to implement and fill with what was familiar to them and what they saw as pure and right. As a result all other cultures became wrong and from this the legislation was made that marginalized non-whites and created white civility.

The Immigration Act of 1910 then further established white civility because the regulations on approved immigrants increased and allowed government officials to have greater control over who could immigrate to Canada. In the words of the document, they were given the power to determine who was “unsuited to the climate or requirements of Canada”. The ambiguous notion of ‘Canada’ became defined by those who took power to enact what was ‘right’. Assimilation becomes part of the melting pot in the United States, but in Canada we are proud to say we are a mosaic. But this mosaic wasn’t any different than the melting pot because of the legislation that prevented any differences from white cultural standards. 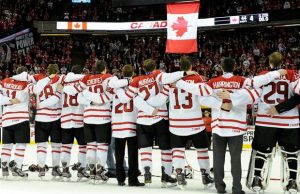 The New World was supposed to be the Perfect World for those leaving the Old World. They saw it as the opportunity to create new rules and a space where they could be ‘free’. America is based on the idea of “liberty and justice for all” however this didn’t translate. In both Canada and America the rituals practiced as a nation including National Anthems and the Pledge of Allegiance are ways to create and maintain a nationalistic sense, however all of these rituals are primarily Christian-based and unwilling to change that usually based in the notion of ‘tradition’. White civility continues to reign as their religion and beliefs maintain their presence every sports game or morning as classes stand to show support of their country. But white civility rituals such as the anthem can change in Canada as the recent parliamentary discussions on making the anthem gender-neutral. The discussions on “God” in the anthem could be next. There have already been speculations and while the defense is already creating a case, it will take the millions who are not Christian-oriented to change the white civility that the founded this country. But change can happen, it just takes a little more extra, and maybe a few Facebook Groups.

2 thoughts on “The New World”