“If Europeans were not from the land of the dead, or the sky, alternative explanations which were consistent with indigenous cosmologies quickly developed” (“First Contact”43). Robinson gives us one of those alternative explanations in his stories about how Coyote’s twin brother stole the “written document” and when he denied stealing the paper, he was “banished to a distant land across a large body of water” (9). We are going to return to this story, but for now – what is your first response to this story? In context with our course theme of investigating intersections where story and literature meet, what do you make of this stolen piece of paper? This is an open-ended question and you should feel free to explore your first thoughts.

My first impression of this was to wonder what specifics of this story there were; who else tells it besides Harry; where do they tell it; when has it been told since (part of me even wondered when paper was invented). It’s not that I necessarily need the answers, but that having them would make me feel more comfortable in my knowledge. I understand that gaining this knowledge can be interpreted as limiting to the overall meaning of the story however I find I’m curious about how these themes could come into a story that is so timeless – this could also be the fact that I am reading it in the context of academia and therefore my curiosity is taking precedence.

Only after my initial curiosities did I begin to wonder what the paper might contain but I understand and appreciate that some of the best stories leave that to the imagination. While I tried to make a guess or find some kind of clue in the story as to what might be on the paper, I just couldn’t. I even considered that maybe the paper was even blank or covered in runes.
The story can be looked at two ways; either the Native Americans had the 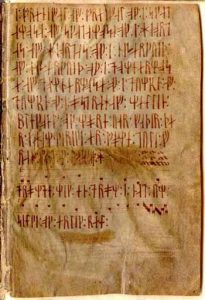 paper taken from them; or the Europeans took the paper and used it. The subject of this aspect of the story defines what the paper’s main function was. While it’s obvious to conclude that the paper led to reading and writing that the settlers defined themselves with, its origins within North America can lead to questions such as was this something the Natives were deprived of? Or something that they didn’t need? I find that the story leaves these questions ambiguous and allows individual interpretation. The paper itself seems to be sufficient as a representation of the European aspect of the twins. The twins of the story also rang a bell for me – in the past twins have been pointed out in my classes as loaded with symbolism. From Greek to African to Native American mythologies twins are part of their gods and goddesses, spirits and legends. With something that spreads across this many cultures there will obviously be conflicting ideas in the symbolism, but to me I remember being taught that twins represent perfect balance and Harry’s story reinforces this idea. The twins in this story balance past and present, man and woman, European and Native, nature and paper and many others and from this story an imbalance occurs that leads to the conflict in Canada’s current story.

The story developed throughout this chapter for me and I really enjoyed when Wickwire points out that “although he would never tamper with storylines or fictionalize any part of a story, he incorporated seemingly extraneous details where he felt they belonged. For example, when he learned that whites had landed on the moon, Harry immediately incorporated this detail into his story about Coyote’s son’s trip to and from an upper world” (29). This quote resonates with me because it brings to light how cultures can mix and be successful. Harry adds to his story as he learns more about a people that while different from him, he acknowledges as descendants from his ancestors twins. This flexibility to incorporate present day narratives and those of other cultures into ones that are part of a specific cultural past shows an inclusion that residential schools proved European settlers didn’t understand. As Wickwire puts it, “For Indians, power was located in their hearts and heads; for whites, it was located on paper” (16). I found that the representations within a Christian European context are not as adaptable and instead their notions are those that Wickwire describes as their own mythologies that emphasize a single creator and a linear progression through time, history, and science. For Native Americans their stories are what she refers to as “this timeless zone of relative familiarity” (14) in which stories of the past are brought to actively engage with the present. I admire this and believe that while the stories must have subtly changed over the centuries, the themes ring true and present knowledge to the listeners.

Overall my initial impressions continued to build over the course of the chapter like Wickwire’s did as she continued to hear Harry’s stories and contemplate them after the fact. My immediate reactions after reading the story were to want to learn more, but as the chapter progressed and Wickwire referred back to the story I was able to do the same and to contemplate further and consider different aspects of the story deeper.