This is what I lived through this weekend. Please watch. 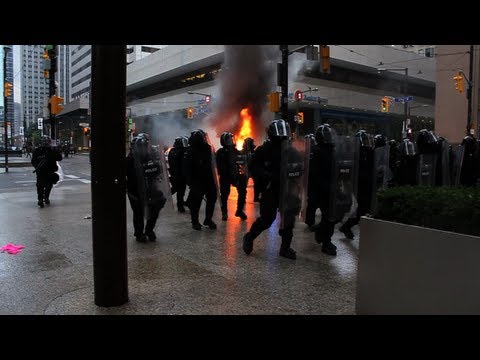 Saturday afternoon. Toronto Eaton Centre. American Eagle Outfitters. I show up for work and am told to stand by for notice that we need to evacuate. A protest was moving towards us on Queen street without ANY police present. My manager held the store phone in his hand, waiting for instruction to leave before the protest got to the Eaton Centre and put us in danger.

On their way towards us, Queen Street was destroyed. Store front windows were smashed, The Bay was looted, and cop cars were set on fire. I got these updates periodically over my headset. We knew they were coming.

Shortly after, they arrived at the south end of the mall. Mall security blocked the doors. We were told that the protesters had arrived. Most shoppers in our store had no idea what was happening just a few store fronts away and what had taken place on Queen Street moments ago. They had no idea that there was a cop car on fire in the middle of street or that outside looked like a war zone.

Alerts went out over the mall emergency alert system, broadcasting over the speakers that there was an emergency situation in close proximity to the Eaton Centre. It advised all customers to leave. We had to quickly wrap up all sales and ask all customers to exit the store. Customers didn’t know why they had to leave, we had to inform them of what was taking place.

As soon as the last customer left, we were advised that the protest was moving up Yonge Street towards Dundas Square. We were under lockdown and couldn’t leave until they left, and that’s if they decided to move on from Dundas Square. Yonge and Dundas is like the Times Square of Toronto. It’s at the north corner of our mall where H&M, Adidas, Forever 21 and the plaza sits. CityTV looks into the plaza, the Toronto Google office, and an AMC theatre.

We had to stay in the store. We folded clothes until we got the news that it was safe to leave. From our cell phones, our friends that worked at stores on Yonge street and people who were following the news told us what was happening.

One of the Starbucks in the mall. Windows smashed.

Slowly they were making their way along the east side of the mall to get to the square.

The Bank of Montreal. Windows smashed.

Once they got to Yonge and Dundas, they headed north past the mall and onto all the street stores.

Once the protest moved north, it reached Yonge and College where the main protest of the day was taking place and why no police were watching this crowd that came and ripped apart the city. Another Starbucks was targeted. Violence and arrests broke out. Yonge and College which is a place I commonly wait for the street car or visit the College Park Metro was now a war zone.

We were soon allowed to leave the mall through a door guarded by security and blocked off with police tape. I walked out onto Yonge Street. Usually filled with cars, it was empty. No police in a city that has been covered with riot police in full gear on every corner. Just citizens walking around in shock, looking at what must of been a bomb that went off in the downtown core. In the distance, smoke from cop cars that were set a blaze was creating a dark haze and camera flashes filled the streets.

I walked up Yonge. The biggest crowd was formed around American Apparel. It was hit the worst. Doors and windows smashed through with signs, bust forms broken and dragged down the street, glass everywhere, and human feces thrown onto their window front. Here are some of the photos I took from the scene on my BlackBerry.

I just have to say that this is not my Toronto. This would never happen day to day. Riot police do not hang out on a street corner. 900 people are not arrested in one weekend. I don’t know what these riots achieved but I do know that we need to direct the energy that we put into these ordeals into something that has real results. We need to teach each other how to take action. We need to find another way that is not violence to express ourselves. I fell asleep Saturday to the constant sounds of helicopters outside of my window, so loud, that I could hardly fall asleep. I do not want to see another weekend like this ever again. It disturbed me that people down the street had no idea what was going on, but they knew the score of the World Cup game. Let’s show some more compassion, let’s take action, and let’s stick to peace.

One funny thing out of this weekend- Our toilet broke inside our American Eagle on Sunday. Marty posted this sign.

For more images and tweets from my weekend of unexpected havoc, and what it was like Friday when I was in the middle of a protest and 100 riot police marched towards me, please read all my tweets at twitter.com/ericafromcanada

5 thoughts on “This is more important than Music Monday”