The Collection in The University of British Columbia (UBC) 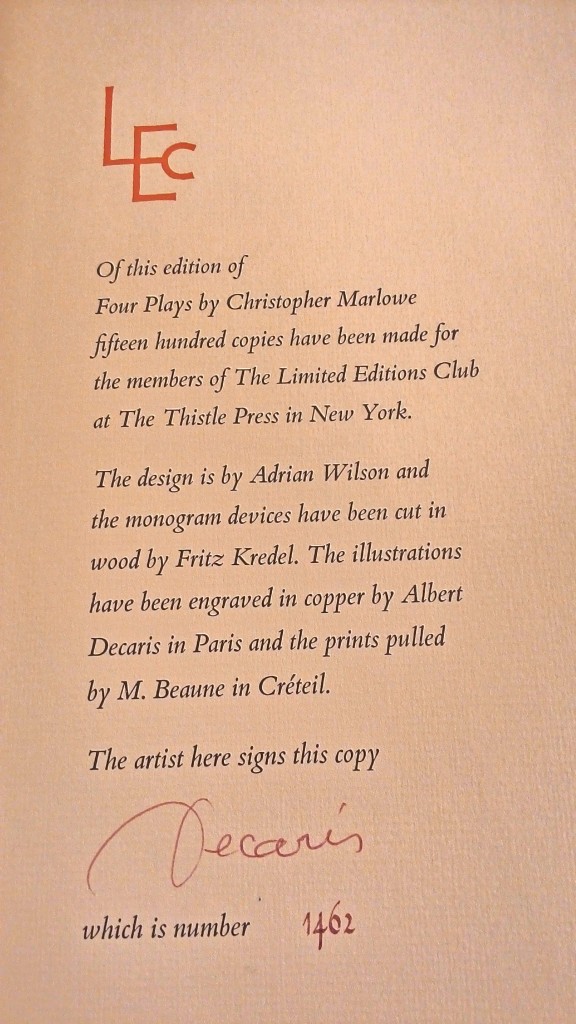 The fifth device designed by Adrian Wilson can be found here, a logo of The Limited Editions Club.

The book is donated by H. R. MacMillan and now preserved in Rare Books and Special Collections (RBSC). I couldn’t find data to prove if MacMillan donated other LEC books (unless I call out every LEC books and examine them one by one to see if MacMillan’s bookplates are on them). But considering that UBC owns 282 Limited Editions Club books  (271 in RBSC, 10 in Koerner Library and 1 in Asian Library), it is more likely that they come from multiple sources. A record of the private gifts, grants and bequests to the University (April 1969 — March 1970) proves my thought and indicates that some LEC books were gifts from J. Bricken. 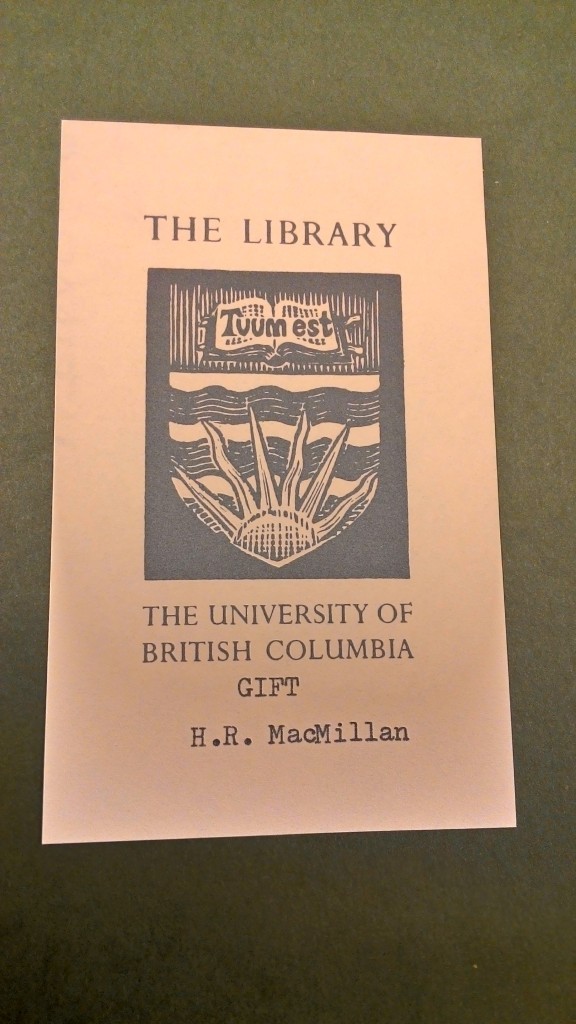 I was also curious why most LEC books are collected in RBSC whereas some are in Koerner Library and Asian Library. Librarian / archivist Chelsea Shriver in RBSC answered my questions, explaining that RBSC generally hold materials before 1900, in addition to fine press and limited edition books that are more recently produced ones. And items which are 1900 and newer usually go to Koerner Library. So the LEC books in Koerner might be purchased when they were still new and not considered “rare” at that time. As for the copy in Asian Library, according to Chelsea, “until a couple of years ago, Asian Library held its own collection of rare books, which have only recently been transferred to RBSC.”

How to start collecting?

If you are not satisfied with visiting the collections in libraries and desire to own them, the LEC and HP books are actually affordable for most of people, except Ulysses and Lysistrata. But before you purchase anything, it is recommended to do some homework first.

1. Compare books on Abebooks, Amazon and Ebay to know the price range. For example, I searched Dracula, Walden, Ulysses and The Sonnets of Petrarch on Abebooks. They have both LEC and HP editions (or in the case of Ulysses, a similar version by Easton Press); popularity, condition and rarity reflect in prices. One will need some background knowledge about LEC and HP to know why the books cost so differently. But bear in mind that the price on these websites are just for the reference because the marked price doesn’t equal to the price people actually pay and in cases the price goes down eventually.

The Sonnets of Petrarch

Generally, a standard Limited Editions Club books cost around several hundred dollars now, depending on the scarcity, the artistic value and the condition. Sometimes they even cost less than the original price if adjusted according to the inflation. Many details influence the price, such as whether the monthly letter is laid in or not, the slipcase is missing or faded, how many signatures are on the colophon pages (because sometimes there can be more than one signatures). Each book is a special case and needed to be estimated differently.

I was pretty disappointing when I found out the price of Four Plays by Christopher Marlowe on Abebooks. Adjusting to inflation, the original price of $10 in 1966 is about $72 in 2015. Yet the price of this fabulous book doesn’t really go up. I don’t know if I should be happy that they are so affordable for even a poor student like me or I should be sad that they are so undervalued of their well-design when many new books cost much more in bookstores with plain binding and no illustration.

If you are interested to have more systematical studies about rare books of LEC and HP, there are also published catalog and guides. Michael C. Bussacco once published An Annotative Bibliography of the Heritage Press and Heritage Press Catalog & Checklist: The Ultimate Book Collector’s Resource. Bill R. Majure also organized the list in The Limited Editions Club–A Collector’s Guide & Checklist 1929-2010, but he puts the complete list on his website, Montpelier Books & Art, as well.

Some dedicated collectors also archive their collections and reviews on their blogs or website. The Book Blog listed Fine Press Links for book lovers to look for further information.

Why do we collect?

A question “Why Folio books do not appreciate in value?” asked in online forum, LibraryThing, sparkled dynamic discussion among members. Some suggested that those books were overpriced at the first place, which is arguable. Some think they are not rare enough with plenty of copies circulate on the market, because these books are usually preserved in good condition because they were very well-made and owners tend to take good care of them.” In the used book market, scarcity is everything,” said Django6924, an active member of the forum.
To make money by investing used books might not be the best idea. Only few books appreciate much due to some unusual secondary merit besides their intrinsic value as well made books, for example, some first edition books. Yet is it a valid obsession? When most people go crazy for books of first edition, some people find it ridiculous instead because “first edition” doesn’t guarantee the quality of books. Sometimes the first edition might have poor binding, many typos and faded illustrations. Yet once again, when the first edition books were not made with high quality, it is harder to preserve and leads to less circulation on the market, which might push the price even higher.

It comes to the very basic question in the end: Why do you collect? Do you collect as investing in a business? Or do you collect for the joy of owning beautiful things? Some books may not appreciate over time yet they represent unique memory in one’s life. Many people fell in love of reading because of these beautifully made books. How can we measure the enjoyment of owning these amazing books? The affordability of these fine printed books enable them to bring joy to a great number of readers, which is perhaps why George Macy started his publishing business at the first place.

Books are physical items which at the same time preserves intangible knowledge and wisdom. A well-designed book brings immense happiness to the person who holds it. No one describes this feeling better than Adrian Wilson in the Introduction of The Design of Books,

“Typography communicates, the illustrations illuminate, and the binding enhances and preserves the creator’s thought.”

Let us keep reading and supporting the best by-products of human civilization in fine press!