Founded in 1929 by George Macy, Limited Editions Club aimed to provide finely illustrated version of classic texts. The illustrators include famous artists like Pablo Picasso and Henri Matisse. Because the years of depression, many artists couldn’t find regular sponsors or jobs and were employed by Macy.  LEC published books every month since 1929 to 1980’s and gradually faded in 1990’s and after 2000. There is no news about any recent plan for publication.

After the death of George Macy in 1956, his wife, Helen, took on the work until 1968. Her son, Jonathan Macy and other family members run the company until it was sold to Boise Cascade Corporation in 1970. And it was sold to Ziff-Davis Publishing Company and then Cardavon Press. After failing to operate the LEC in 1970’s, Cardavon sold it to Sidney Shiff in 1978, who changed the focus to produce more fine art books.

With only 1500 copies of every publication, LEC books feature original artwork and signatures of either the author, the illustrator or the designer. Sometimes even three signatures appear on the colophon page. Or in some cases, signed by the person who inspired the story, like Alice Hargreaves, who was the muse of Lewis Carroll’s Alice’s Adventure in Wonderland.

Of all the publication of LEC books, two books are most pursued by collectors, Ulysses and Lysistrata. James Joyce’s Ulysses was illustrated by Henri Matisse in 1935, and of the 1500 copies, only 250 of them were signed by both the illustrator and the author. Because of Joyce’s failing eyesight, he agreed to sign 250 copies instead of 1500 and George Macy paid him extra five dollars for each book he signed. Macy sold these 250 copies at $15 instead of the regular price $10 and now these books worth at least $25000 in the market.

Lysistrata, illustrated by Pablo Picasso, is also coveting to collectors. LEC also issued 150 copies of a separate portfolio of the six Picasso etchings,each of them signed by Picasso. It now costs around 6000 to 10000 dollars to purchase a copy. Here is the short introductory video made by Abebooks.com, where one can find many LEC and other rare books. A poster of The Heritage Club

However, I couldn’t find a HP edition in UBC Library,  so judging from the photos online, the most obvious differences between the HP edition and LEC one are the cover design, the book spine, and the illustrator’s signature. The illustration and the layout are the same as the LEC  version. Yet I am not 100% sure whether the paper and the print quality are the same. And the content in Sandglass, the pamphlet enclosed in the books, is 90% similar to the monthly letter by LEC, with some correction of previous mistakes, for instance, “The poet and playwright was born in Canterbury a couple of months ‘before’ Shakespeare….” which was originally written as “after.” It has the brief biography of Adrian Wilson, which was not included in LEC monthly letter and the description of the binding is also different.

In book blog The George Macy Imagery, blogger Jerry Fieldsted praised the Heritage reprint as “one of the finest editions done of a LEC reissue and some even consider its binding superior to the LEC”. To me, they are equally adorable.

(Photo credit to www.ebay.tv and  www.ebay.com, from left to right is the LEC version and the LP one.) 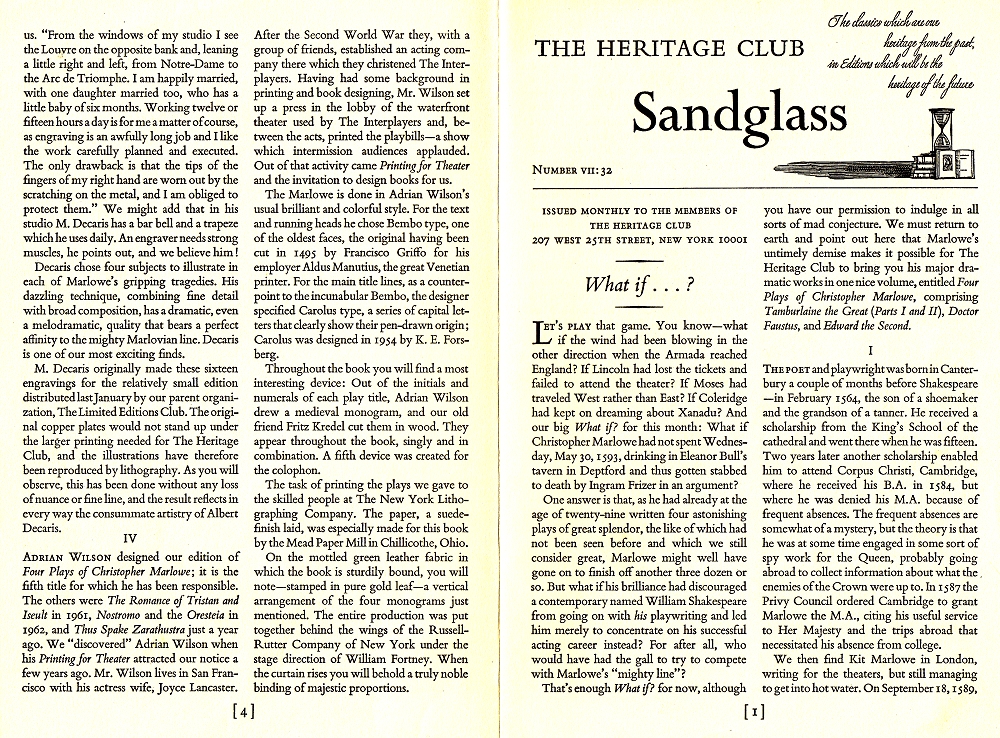 (Picture Credit to to The George Macy Imagery) 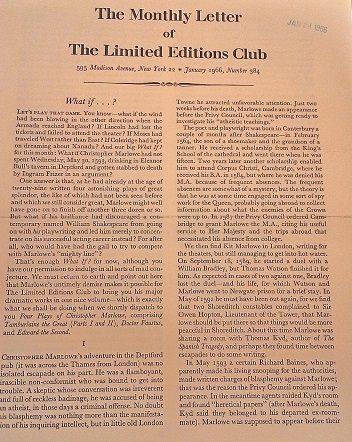 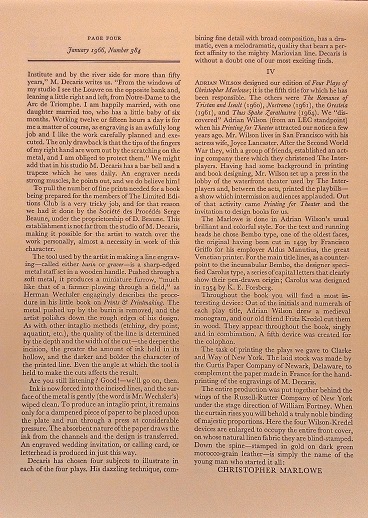 For those who are fascinated by the design of the books itself and not obsessed with the signatures of the authors, the illustrators or the designers, The Heritage Press might be a perfect choice to own well designed books without spending too much money. (I find it unbelievable that one can pay 6.5 dollars to acquire a hardcover of Christopher Marlowe’s Four Plays with slipcase and Sandglass!) Yet for ambitious collectors who want to invest books that appreciate with time, The Heritage Press would not be ideal.

Yet from the online forum, LibraryThing, I found out that Limited Editions Club books don’t necessarily surpass The Heritage Press Edition, like Four Plays of Christopher Marlowe. Readers have different ideas and personal preference for the books regardless of their value on the market.

Now Harry Ransom Center in The University of Texas owns  the archives of the George Macy Companies, including both the Limited Editions Club and The Heritage Press. And I believe libraries around the world more or less own some copies of LEC or HP books, including UBC.

1. A Brief History of The Limited Editions Club by  Bill R. Majure on his website, Montpelier Books & Art. A complete list of the publication of LEC books can be found on his website as well.

2. The Heritage Press on wikipedia