Google Plus launched “Page” on Nov 7th 2011. Similar with Facebook “Page”, it offers a dedicate platform for business and customer interactions. This pushes Google and Facebook in head-to-head competition. 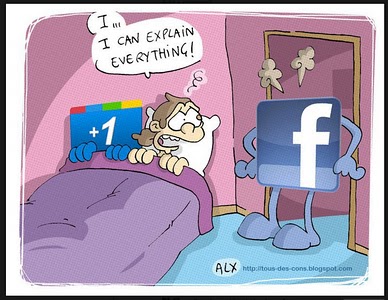 Google Plus, the latest attempt from the internet giant to invade social networking has attracted great media attention. The growth was fast: one month since its opening for general public the users reached 40 million. However, it is still far away from Facebook in terms of number of subscribers.

Google’s ambition has been seen through its latest “power user” strategy: Kim Kardashian, Ashton Kutcher, Britiney Spears and some high-level political figures like UK Prime Minister David Cameron, have recently started their Google Plus accounts. It is expected that Google Plus will attract more users really fast but the reality is still uncertain. What makes the competition interesting is how the two social media sites try to grow and achieve the critical mass: Facebook insisted its edu request and it took Facebook about 2 years until it opened to general public. Google Plus, on the other hand, only waited for about 2 months for accepting public subscription. 2011 is quite different than 2004, when social media was conceiving. So it might make more sense for Google Plus to go for a Allstar power user approach. 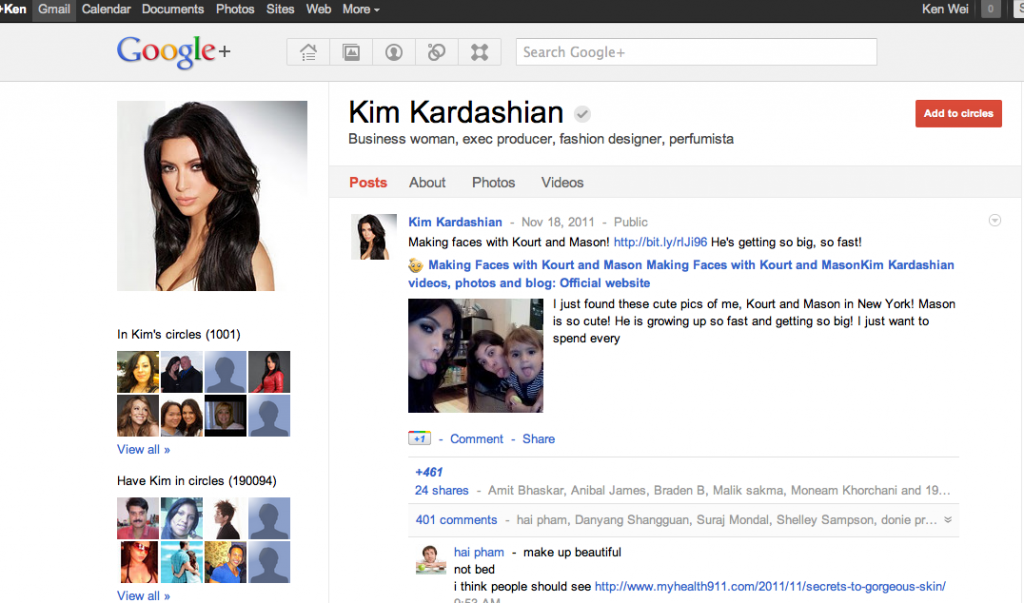 Kim Kardashian is on Google Plus 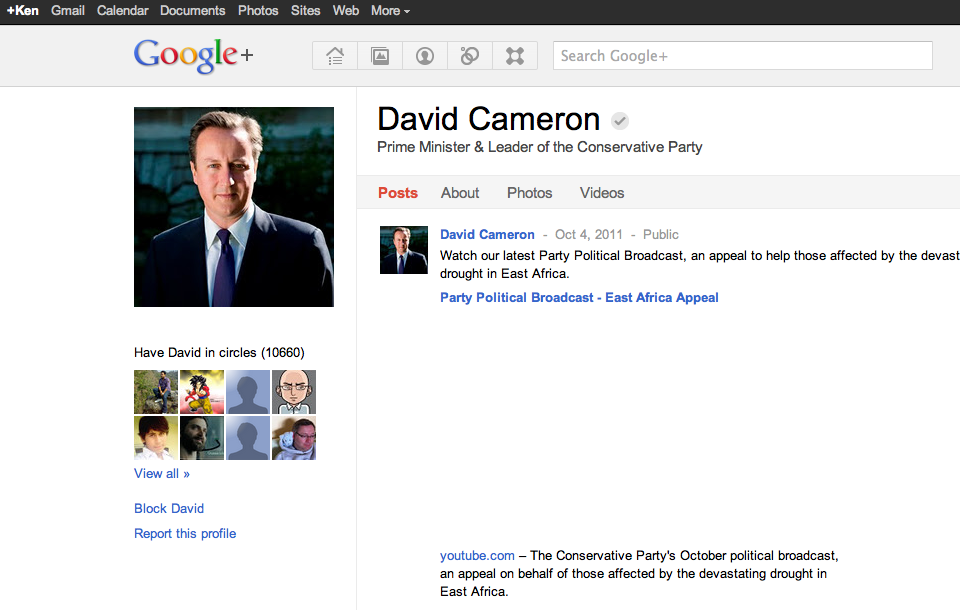 David Cameron is on Google Plus

So what matters to business users. Just a few weeks passed, a lot of debate rose to determine which is better: Google Plus Page or Facebook Page. At this moment, I would say it’s too early to tell. But with a much smaller audience, the answer is obvious: Facebook has the advantage of fan base.

But what matters actually is not quantity, rather is about the quality of fans and quality of the relationship. Google Plus Page therefore were said to have the following advantages: Google + Page might benefit from better Google search results; Google Plus Page may better establish a business-oriented communication platform rather than Facebook “one for everything” and questionable business-customer bond. However, the internet “Matthew Effect” is not that easy to overcome. Google Plus Page has a long way to go to beat Facebook Page.

Again, it is too early to tell the fate of Goolge Plus Page. But for business, especially small ones, why not start the account now before others steals you name on Google Plus Page. Then share some content form Facebook page or your blog and play around with the new functions. Until the trend becomes clearly, you can’t ignore the giant like Google: just like no one could image how popular Gmail would be today? Who can tell that Google won’t be the one for everything. 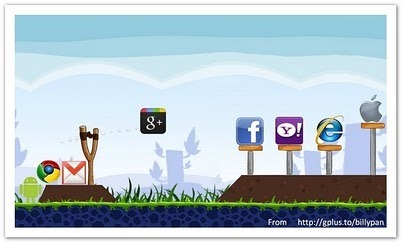 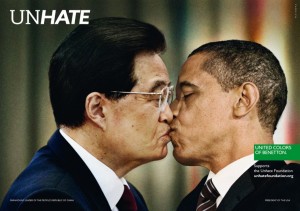 The shocking picture of president Obama kisses Chinese Chairman Hujintao appeared on the Internet Nov 15th 2011. It is from Benetton again, who notoriously launched a series of highly controversial ads in the past. It seems that Benetton has come back. This time it wants to make a bigger impact with the new tools available like social media.

This is an exciting marketing event, not only because its controversy, but also more related to the fact that we are able to simultaneously observe how marketers plant the story and how media disseminates the influence of brand messages. It’s like a live show of how Benetton experiments its marketing principles in the digital era!

What this campaign is all of about?

The campaign started on Nov 15th 2011 in the name of “UNhate foundation” by Benetton. The central theme is to build “a culture of tolerance”and to “combat hatred”. The proposition is expressed by “kiss”, the “most universal symbol of love”. It was said to connect to Benetton’s core brand value and to embrace many “UNhate” initiatives, for example, establish “UNhate” day, facilitate acceptance of diversity and help children. The campaign itself consists of a short film, images political/religious leaders on media, billboards with same images in major cities around the world. Of course, the campaign website provides “kisswall” and “Unhate list” where participants can upload their own pics and messages in connection with Facebook and Twitter.

Did it go viral? 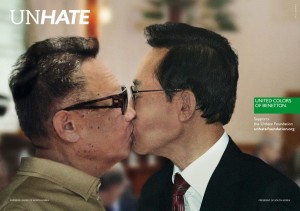 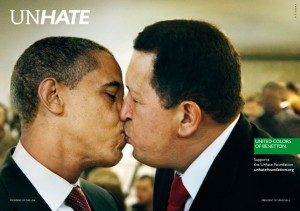 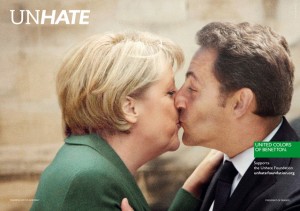 With these eye-catching images, it was expected that the campaign would turn to viral really fast. I started monitoring “UNhate” online impact since I first saw it early morning today. Up until now (16 hours so far), Number of Facebook “Likes” of the campaign increased from 10K to 15K; the Benetton site ranking went up considerably; campaign film also attracted hits more than 330,000 within 3 days on youtube. 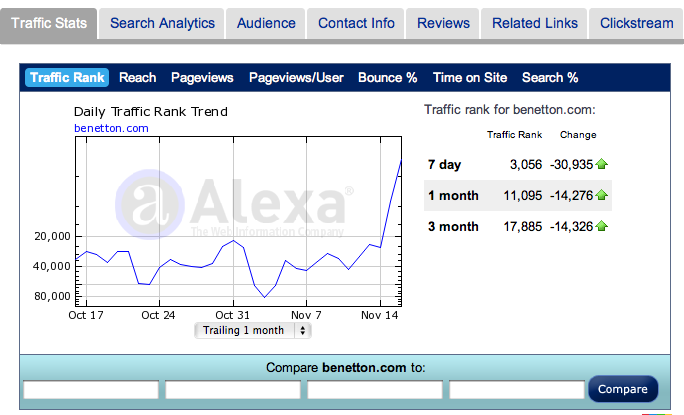 Increase of Benetton Website Ranking (mainly based on traffic, From www.alexa.com) 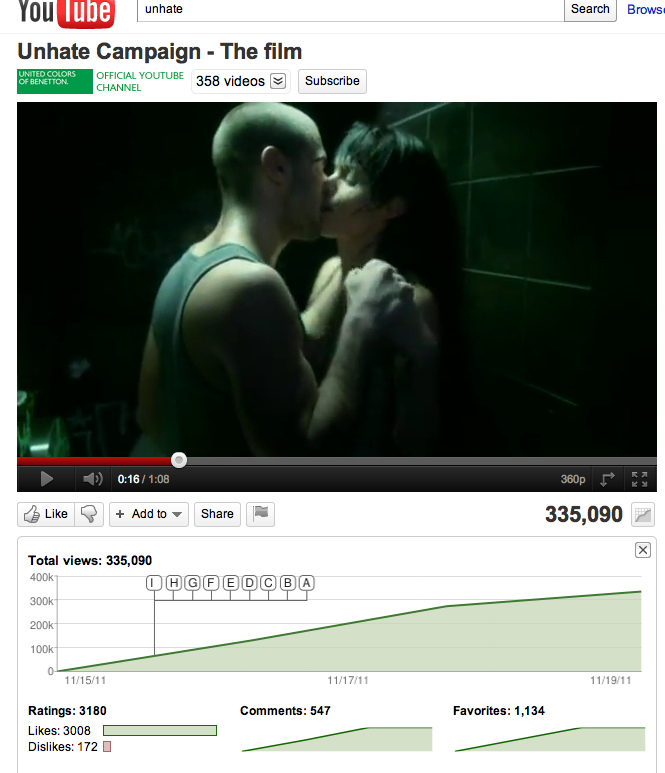 It’s too early yet to tell if the campaign has realized the expected impact in terms of audience reach (here not mention the quality of publicities yet), but I will keep you updated.

What might be the underlying reasons for Benetton doing this campaign?

Claimed by Alessandro Benetton, the leader of Benetton company, that the purpose of this campaign was to “reaffirm the value of the brand” and connect the past to the future. To some extent, the proposition was relevant with what Benetton’s previous brand image and promise. But it attracted lots of speculation because Benetton did not perform as good as the competitors as Zara or H&M in financial terms. So there is a high probability the campaign was designed to catch short-term market attention and regain the lost-ground.

How the message was communicated?

First of all, Benetton used the integrated marketing communication concept to ensure the exposure to target audience. Secondly, it tried online and offline integration to enhance the communication engagement. Thirdly, the campaign leveraged various social media tools and user generated content to enrich the interactivity. 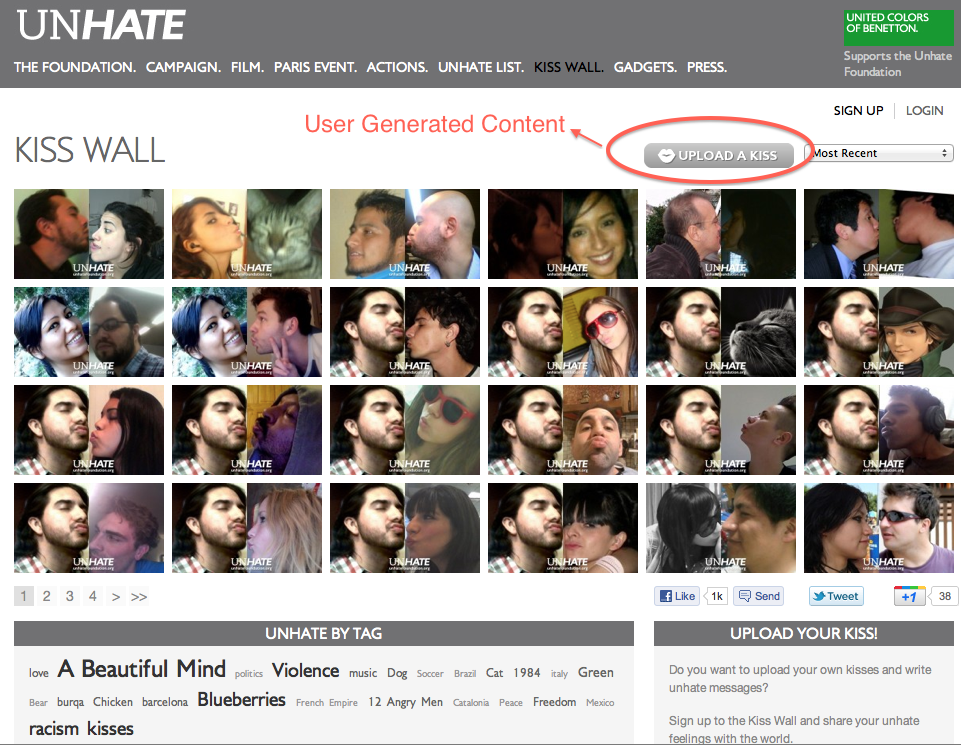 Social media is like a natural fit for Benetton’s style of message: controversy leading to mixed responses. Now Benetton finally comes to play around the social media with its beautifully crafted campaign content. One thing is for sure: social media will accelerate the diffusion of the message and deepen the latitude of reach. But whether social media impacts the campaign more in a positive way or the other direction is still not clear. 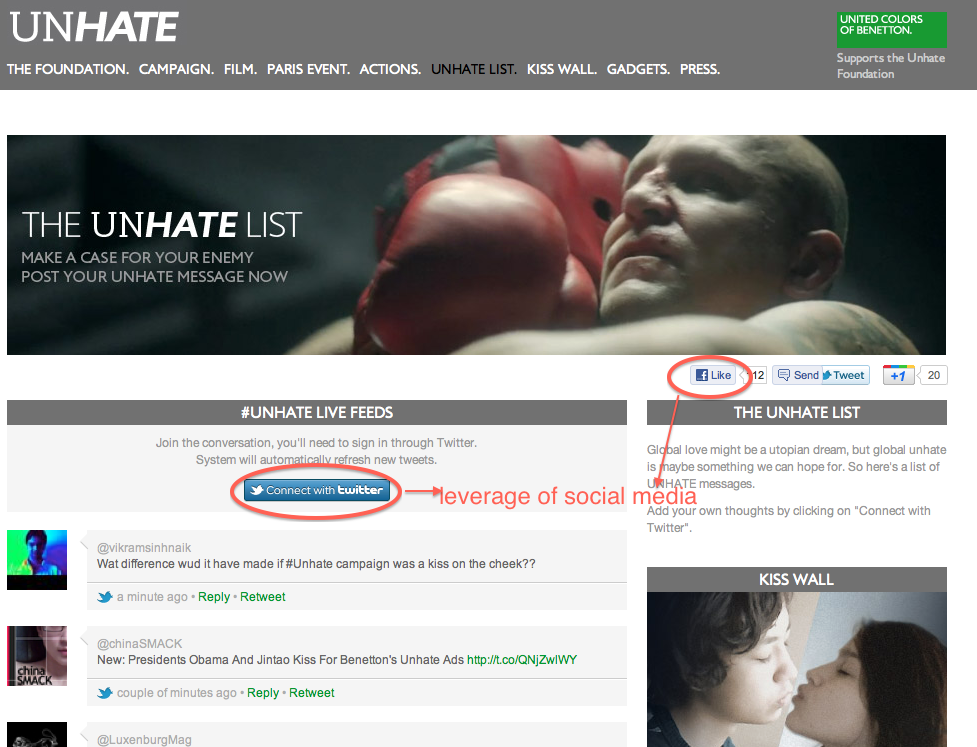 Meanwhile, a few issues have already emerged: tremendous opposition from the public as a result Pope’s picture was forced to delete. Even White House protested the inappropriateness of the images. Benetton is also likely to receive potential complaints from North Korea or China where the political leaders are highly respected.

The primary consideration for Benetton now is probably, the more controversial the campaign becomes, the better attention brand attracts. Controversy might be one of the characters of the brand. But how likely is the short-term attention will last and how this will help to recapture consumer attention? and how this action will favourably drive financial performance?

Probably Benetton needs to fine-tune its product and design first.  At the end of day, “go viral” doesn’t mean anything if your product is not competitive in physical terms. Or it still doesn’t make sense if the propaganda is not relevant to what you sell.  A common pitfall in this digital world now is that we sometimes care too much about the “silver bullets” instead of some unchanged marketing rules.

As a brand manager for 3 years and having the passion for brand management since almost 10 years ago, I always reconsider how brand works in reality and how meaningful and influential to build a strong brand.

It seems as a silly question: is brand useful? Those theories and frameworks that Aaker, Keller and Kolter have perfectly crafted DO make sense. But what I see is the basic principles should be always updated and revised because of the changes in marketing and the shifts in digital life.

What I meant by “changes in marketing” is the evolution and particularly the saturation of marketing information and the repetition of marketing practices. Essentially, my question is how effective if you use the same strategies years after years. Consumers are learning and they become immune to marketing bombards. Further, they probably will be annoyed by most commercials or direct selling information today. Marketing information overload taught ordinary people to avoid what marketers want to say. In the meantime, many marketing tactics we have learned are becoming POPs, making consumers tired to listen.

Brand still works. The important factor we need to address here is how you build excellent “brand experience” or core offerings. So brand is not only about marketing communications or creative ads, it’s more about the integrative whole of tangible and intangibles benefits to customers. Every contact points between the consumers and products/services are components of brand experience. Very often today, mere “branding” effort would only broadcast bad publicities if your brand experience is not right at the first place. In contrast, if you offer compelling brand experience, advocacy may make brands shine.

To get this rethinking of branding going, I am curious about how different building a brand is in the digital world. Edelman offers a really good approach to this. From a decision funnel perspective, many companies spend money at the wrong “contact points”, for example, consumers now are more influenced by advocacy or reviews from their peers. An neglect on these channels may lead to a failure to influence purchase decisions. Instead of a funnel, the consumer decision marking process is more like an iterative circle consists of “consider”, “evaluate”, “buy”, “enjoy”, “advocate” and “bond”. This is called the “Consumer Decision Journey”. What Edelman suggests is companies should focus on the stages or contact points which become more relevant today–e.g. advocate and bond.

I am glad that these two articles give me great motivations to rethink branding in the Internet age. To me, “brand” is always useful in marketing, the core has not changed, it just the way to achieve this changed.