In reading Deonato (2014)  as well as Gerolimos & Konsta (2011), it’s clear that social media applications are not always as well taken up by patrons as librarians might like.  The latter conclude:

It appears that the new library services, although they were launched as a direct or indirect result of the web, do not always contribute to some of its primary supposed contributions, namely participation and content creation/contribution. On the contrary, it would appear that library patrons continue to use those services in a very old-fashioned way, relying on some core functions that libraries perform, namely information discovery and retrieval. 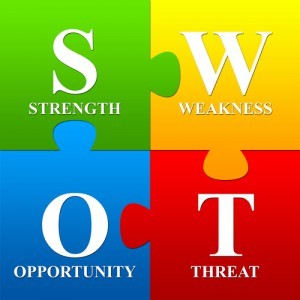 When this happens, time and money are wasted, and — worse — patrons may disengage. How can librarians ensure that they are investing in the right social media tools in the best way, while anticipating and avoiding pitfalls? One possibility is to take an approach common in the business world, namely to do what is called a SWOT analysis.  This approach to decision making, argues Joe Fernandez, “encourages librarians to take stock of their usage of social media, to guard against inappropriate applications, and to offer effective implementations.”

SWOT stands for Strengths, Weaknesses, Opportunities, and Threats. In his 2009 paper, “A SWOT Analysis for Social Media in Libraries,” Fernandez makes a number of excellent points for each of these aspects. Below, I provide one example for each: read his full article for more.

When done well, social media campaigns may contribute positively to user engagement with a library. A SWOT analysis is one useful tool to ensure that they are indeed done well in a given setting. I would argue that anyone considering this approach take what Fernandez has done as a starting point and then refine it for the particular library.