Since 2010, China’s economy began to experience staggering rates of inflation with gradual drops in producer prices. 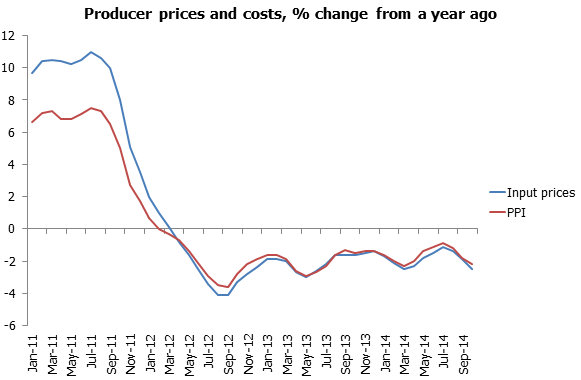 Banks fear that potential deflation in the near future may lead to a “vicious cycle of contraction”. Relating to the idea of time value of money, deflation  would mean that less money circulates in the economy, leading to a rise in value of money over time. When money is worth more at a later time, debts become more expensive to pay, possibly causing consumers to cut down on spending and companies putting off investments. At the current stage, disinflation is not actually entirely detrimental, as lower prices of daily commodities allow families of average incomes to obtain those necessities more easily. However, in the long run, disinflation also indicates slowing economic growth, which poses a major problem for the world’s second largest economy.

As of now, there are several reasons leading to the falling producer prices. One being a general slump in the world economy along with reduced demand and consumption rates. Coupled with that, overproduction around the world are worsening the situation amidst diminishing demand. Although short term solutions such as cutting interest rates may ease the current circumstance, the problem at hand is difficult to solve in its essence. From my perspective, a long term solution would likely involve either limiting production or creating incentive for more consumption. Limiting production seems impractical as there is the tendency to produce more to profit more. Yet producing less, but of better quality, or even innovating new techonologies and discovering new consumer goods to produce could be a good start to changing the slowing world economy.