According to a recent paper in Environmental Research Letters, you get numerous cases of art (and cultural) history threatened with drowning by rising sea-levels. Authors Ben Marzeion and Anders Levermann have computed that up to 136 Cultural World Heritage Sites recognized by UNESCO could be at risk to changing sea levels over the next 2000 years (even if the global mean temperature is maintained for the next two millennium, 40 sites are still at risk). They use spatially explicit sea-level rise predictions and high-resolution topography data to figure out which sites, and which percent of global land area, will be affected at different levels of sustained warming.

The authors use a time scale of 2000 years for a couple of reasons: they posit that by this time, ocean heat content and glacier ice mass can be considered in equilibrium with global temperatures, and it is still a short enough time-frame to apply to sites of cultural heritage (since many UNESCO world heritage sites are at least that old at present). Rather than estimating time frames for potential impact on the sites, they determine the global mean temperature anomaly which will influence sea-level rise to a degree that it will impact the site anytime within the next 2000 years.

The two main contributors to sea-level change over that time scale are thermal expansion of water (>90% of the excess heat generated by enhancement of the greenhouse effect has gone into the oceans) and melting land ice, including the major ice sheets of Greenland and West Antarctica. In their analysis, Marzeion and Levermann use a combination of IPCC model projections and paleoclimate analyses to determine that for every increase in degree K, there will – eventually – be a corresponding increase in global mean sea-level of 2.3m. They do not take into account temporal sea-level variability, such as tides and storm surges. Check out Christopher’s post last week, and think about how changing tides may play into impacting UNESCO world heritage sites.

The list of threatened sites includes the Statue of Liberty (scenes from The Day After Tomorrow, like the one to the right, come to mind), the Tower of London, historic parts of Istanbul, and more.

I just finished studying the sculptures in the Elephanta Caves, near Mumbai, which is on the list of 40 sites already at risk from sea-level rise.The full list of potentially affected sites, at various global mean temperature anomalies, can be found here (scroll down to the bottom).

In my excitement I did a little research, and found out about a couple of contemporary artists who are engaging with sea level change, and climate change on a larger scale. 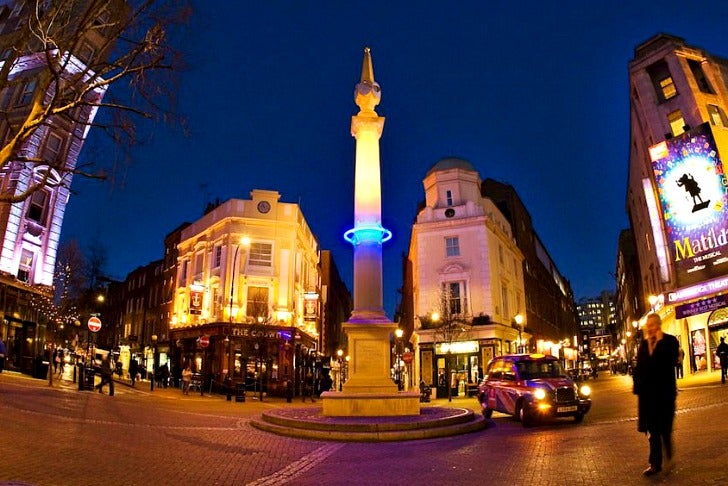 Back in 2012, in his project titled Plunge, Michael Pinksy wrapped strands of blue LED lights around 3 monuments in Central London. The ring of lights marked the projected sea levels 1000 years from now. Similarly, Chris Bodle started his Watermarks project in 2009 in Bristol. For this project, he projects a line, with a measurement, of a future water level on buildings throughout Bristol. He has done some other interesting work on engaging the public in discussions of geography and climate change- I suggest checking him out.

And, for a local Vancouver example, in 2012, artists Rhonda Weppler and Trevor Mahovsky painted panchromatic blue stripes from the base of the Cambie Street bridge over False Creek  to reflect the estimated sea level rise from loss of one of the major ice sheets (5 metres). They painted lamp posts in nearby Cooper’s Park in the same way.

It is also worth spending some time with this blog, by New York-based playwright Chantal Bilodeau, which explores and highlights ways in which artists have engaged with climate change topics. When looking through these links, think about how these pieces function: how do they work visually, and do they promote a deeper understanding of climate systems, or raise awareness about climate topics?

3 thoughts on “What do you get when you cross Art History and climate change?”