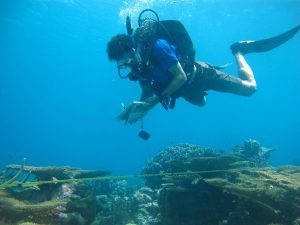 When I first studied ecology, I was struck that so many of the influential research findings came from the same few locations. Often this is because the geographic characteristics or the history of the particular country, island, coastline, or lake makes it ideal for testing a scientific hypothesis (e.g., Barro Colorado Island, which was created by the Panama Canal) or representative of something that is common in other locations (e.g., Experimental Lakes Area in Ontario, a good proxy for northern lakes).

It also a question of logistics. The resources for environmental monitoring – the equipment, the expertise, the money – are not evenly distributed around the world. While scientists do choose field sites based on ‘science,’ we also have to weigh the optimal locations for answering key scientific and societal questions against the infrastructure available and the basic ability to complete research in those locations. No funding agency will support a project unless you can show that it is feasible.

So environmental research and monitoring tend to cluster in places with available resources. Hubs develop. For coral reef research, the hubs include parts of the Great Barrier Reef, the western Indian Ocean, the Galapagos, Hawaii, and the Florida Keys. In choosing to do field projects in the central equatorial Pacific, I am probably tipping that science vs. logistics scale so much towards ‘science’ that it is liable to break, which may explain my growing familiarity with tropical infectious diseases.

This geographic bias in environmental monitoring is essentially the reason behind our work on a new global database of coral bleaching events published in PLoS-One and described in this CBC video:

For as much as bleaching is of interest to scientists, to funders, to divers, and to the public at large, countless bleaching events go unreported or unstudied. The majority of tropical reefs are in developing countries where the capacity for extensive monitoring is limited, either because of the available resources or the remote nature of the reefs.

We tried to fill the gaps by searching the literature and the coral reef science community for reports missing from Reefbase, the existing voluntary database used by scientists, and by spatially interpolating the information that was available. The process produced a database with two components: one is a set of the actual observations, and one is a set of gridded (4 km x 4 km resolution) interpolated maps of the probability that bleaching occurred each year across the world.

The observed database, as described in the paper, has 79% more records than were in Reefbase. The number of reports gives a sense of how coral bleaching has become a more common occurrence in the past few decades. Of the 7429 reports, only 250 occurred before 1990! 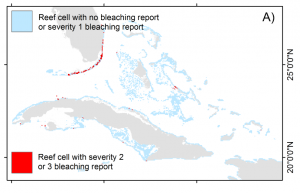 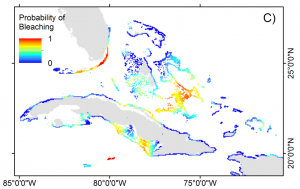 e spatial interpolation was an attempt to fill that gap. At left is an example of the before (top, observations only) and after (bottom, interpolation) from the Caribbean in 2005.

Using the interpolated maps, we found that the area of coral reefs with >50% probability of bleaching was eight times higher in the second half (1999-2010) of the time period studied (1985-2010). We also contrasted the bleaching probabilities with past temperature data and found that the higher the probability of bleaching, the higher the heat stress (measured as “degree-heating-weeks”) that the coral reef experienced. Put this all together, and it is yet more evidence that coral reefs have experienced more frequent and more severe bleaching over the past few decades because of rising ocean temperatures.

This work is only beginning. Version 1 of the database can be downloaded here. We’re also hard at work on version 2, which will include data through the end of 2016. So please share any and all reports of coral bleaching, particularly any older reports that are not described in the existing literature.

5 thoughts on “Addressing the geographic bias in environmental monitoring: example of a coral bleaching database”