Bearing with it: a multi-scale look at changes in grizzly bear habitat occupancy patterns of grizzly bears in response to industrial activities in western Alberta

Habitat occupancy, the presence or absence of a species on a landscape, has gained popularity with wildlife managers over the past decade as an alternative to population abundance inventories. Monitoring wildlife populations is crucial for conservation and management, however effectively doing this requires a lot of time and effort, and is very expensive. By monitoring changes in habitat occupancy over time and space, researchers can answer complex ecological questions involving species distributions, population dynamics, and habitat relationships (Bailey et al., 2014). Occupancy modeling is seldom utilized to quantify population trends over time and its ability to address conservation and wildlife management questions over time remains uncertain.

Using historic hair snag data from a threatened grizzly bear (Ursus arctos) population in Alberta, Canada, this research will explore the application of occupancy modelling to describe long-term changes in species persistence resulting from anthropogenic disturbance and habitat change. Grizzly bears are well suited for investigating the influence of landscape disturbance on wildlife habitat occupancy and persistence as they are exposed to multiple anthropogenic pressures (Berland et al., 2008). Grizzly bears have been shown to increase use of resource extraction areas during certain foraging seasons (although this varies based on disturbance type, age, species sex and level of human activity (Berlands et al., 2008; Nielsen et al., 2002a; Laberee et al., 2014)). This can be problematic as anthropogenic activities and infrastructure has been linked to grizzly bear mortality by increasing the risk of human-bear conflict (Wilkinson et al., 2008), and by facilitating access into grizzly bear habitat (Nielsen et al., 2004a).

My research aims to investigate the application of habitat occupancy modeling as a proxy to abundance estimates to shed light on its effectiveness as a monitoring technique. Further, I hope to quantify the impacts of resource extraction activities on grizzly bear habitat occupancy over time and identify which practices have the biggest impact.

Specifically, my objectives are to

It is hoped that a better understanding of the dynamics between grizzly bears and human-caused landscape disturbance will influence the conservation of the iconic species in Canada through informed resource management practices.

Hair snag data was collected in 2004 and 2014 by fRI Research as part of an abundance inventory. This data will be used to address fine-scale dynamics. Coarse-scale dynamics will be explored using a subset of this data along with camera trap data. Cameras were set up in the southern portion of the study area in the summer of 2019 and were collected over the winter. I will soon be going through the photos which I am looking forward to!

My study takes place in Alberta directly east of the Rocky Mountains and looks at the Yellowhead population unit. The Yellowhead ecosystem is important for grizzly bears in Alberta as it has approximately 30% of all available habitat in the province (Franklin et al., 2001). It consists of provincial lands that are designated as either core or secondary conservation zones for grizzly bears (Stenhouse et al., 2015). There are multiple resource extraction activities throughout the area which have been increasing over the past century, specifically forestry and coal mining. Over the past few decades forest harvesting has increased intensively and more recently oil and gas exploration has become widespread (Linke et al., 2013). These anthropogenic activities are accompanied by a large network of linear features including roads and seismic lines, which provide access to grizzly bear habitat (Nielsen et al., 2006). The study area is bordered by Highway 16 to the north, Highway 11 to the south, and Jasper National Park to the west. This research would not be possible without the continued guidance from fRI Research and financial support from Weyerhaeuser and the Forest Resources Improvement Association of Alberta.

Thanks for visiting my site! Feel free to reach out in regards to my research: 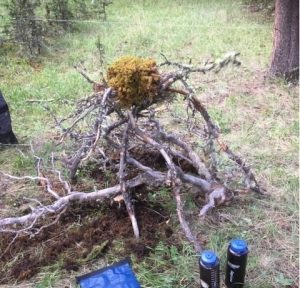 A typical grizzly bear hair snag site consists of barb wire and a bait pile. A barb wire corral surrounds the bait pile which is constructed in a manner to elevate the bait to help carry the smell and attract any bears that are in the area. The bait is poured over moss which helps to absorb the bait, which is a combination of rotten cattle blood and canola oil. As you can imagine it smells fantastic. When a bear visits the site they either have to step over the wire or crawl under it, leaving hair samples behind. 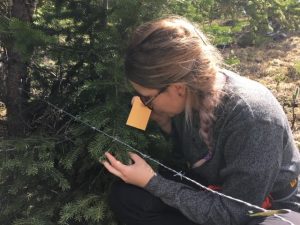 Hair samples are carefully collected and sent away for genetic analysis. The analysis can tell you which bears are male/female, who is related to who, and can even give an indicator of stress exposure from cortisol deposits. 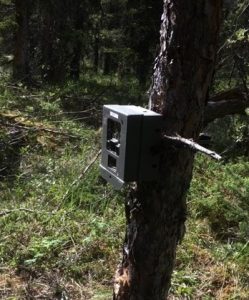 Cameras are a great way to help monitor wildlife. They can be relatively inexpensive, they are easy to set up, and it is a lot of fun going through photos, as long as the camera was actually triggered by an animal and not a branch or piece of grass. 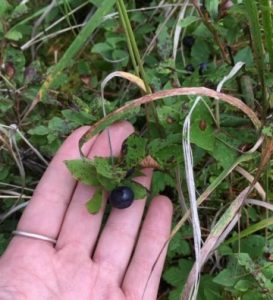 Cameras were set up in berry patches during prime foraging season to increase likelihood of grizzly bear detection. The highlight of this project was getting to sample the berries. Huckleberries, shown in this photo, are my favourite.