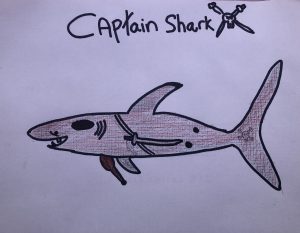 A sailors greatest fear, the greatest swashbuckling shark, this creature is rarely seen until it is too late and even the act of parley will be denied.

A red and grey creature with the pirate lord tattooed on its rear fin, adorned with only one eye and a peg fin which it uses to make sharp turns the cannonball is a terror of the seas and should you come across it, abandon ship immediately and hope for the best. It raids and pillages small ships however it has also been known to sink the likes of some extremely large vessels when the seas get rough. Fast with extremely large fins and a mean demeanour, it prefers to drown sailors or duel under the mighty waves as it cannot bite (Some say due to scurvy it had lost most if not all of its teeth). Rum and gold are its only motives with its greatest treasure being marked on a map etched into the inside of its black eyepatch. It is said that the treasure that the cannonball shark possesses is the Queen Anne’s Revenge filled with gold, gems, bottles of the most exquisite rums and the Royal King’s Crown. When it was a young lad, it is said that its father was killed by two British sailors who sank him into the deep depths of Davys Jone’s locker. It is said that the cannonball shark is still searching for the sailor that killed his father however rumour has it that the sailor has retired to the country side to escape his greatest fear.  This terrifying beast has been the topic of many a sea shanty often detailing its adventures with its first mate engaging in battle with the Royal Navy and making away with the riches of the sea. Last spotted near the town of Havana, this shark has not been seen in over 2 years. Some say that the cannonball shark is still looking for the the disappearing mermaid said to be able to grant any creature a set of sea legs. Once acquired however, its fated first destination is to the country side to finish what the two British sailors started.