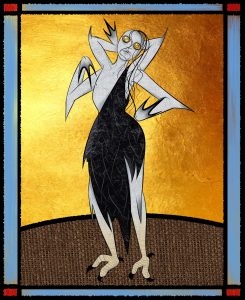 From the Latin word orcus meaning the underworld and death.

The orcus is a strange creature that lurks in the shadows, by bedsides, and outdoors on cold nights. With the feet of a bird and twisted limbs abound, it stealthily moves, the garb of a raven slewn over the unappealing form it beholds. A look into the eyes of the orcus instantaneously bring the soul of a human out of the body and into the underworld, for with this single look the orcus can judge the timeliness of human death. It appears wherever the stench of death lingers in the air, and is only able to be seen by those on death’s door. Although haunting in appearance, it is neither bad nor good. It is simply a bringer, the only beast that can truly judge whether or not a human is fit to die.

It creeps through the shadows like a lost soul,

A rustle of cold wind before it is gone.

The orcus has only one reigning goal;

To judge every human as they pass on.

Eyes gleam and glisten most terrifying,

Orcus should be the only one spying

On the things humans do in the darkness.

Judging is what it has been made to do,

So in its eyes no wrong will it deny.

If you are not careful, it will judge you

Badly and you will go down when you die.

It brings death, and thusly it is freeing.

Inspired by this excerpt from Montaigne’s essay “Of Judging of the Death of Another”:

“When we judge of another’s assurance in death, which, without doubt, is the most remarkable action of human life, we are to take heed of one thing, which is that men very hardly believe themselves to have arrived to that period. Few men come to die in the opinion that it is their latest hour; and there is nothing wherein the flattery of hope more deludes us; It never ceases to whisper in our ears, “Others have been much sicker without dying; your condition is not so desperate as ‘tis thought; and, at the worst, God has done other miracles.”