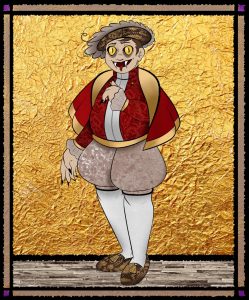 From the Greek word olísthima meaning to slither.

The listhim are dangerous, for they lurk amongst humanity disguised as the average human. They dress in decorated garb meant to reflect the upper class so none will dare mess with them while they watch the antics of humans up close, at dinner parties they slip into and balls they see themselves to. Beware their hands which are often gloved, and the shoes they wear, for those conceal claws sharp enough to slice the throat of any human. In the glow of the moon, the eyes of listhim flash with a snakelike glow, and it has been said that their tongues resemble the tongues of snakes, too. They, believing themselves to be perfect, lurk around and find the humans they believe to be unworthy of the upper class lifestyle. Those they fail to approve are promptly killed, and their wealth goes into the stash every listhim keeps for their own to purchase fancy clothes and other such things so they can baby themselves with things it does not need.

He wants you to think his life has been grand

From the way he adorns his every inch,

One day he might even rule this whole land;

Just don’t look him in the eyes lest you flinch.

At least, in the morning he looks normal

Akin to a human with lots of clout.

His bodily actions are quite formal,

Until the moon rises and he slinks out.

Like a snake, he will slither behind your back,

Monstrous and deranged, he’ll take you away.

And gold to steal and then use in the day.

Some things are not what they seem to be first,

Steer clear from nobles who seem to be cursed.

Inspired by this excerpt from Montaigne’s essay “Of the Custom of Wearing Clothes”:

“Had we been born with a necessity upon us of wearing petticoats and breeches, there is no doubt but nature would have fortified those parts she intended should be exposed to the fury of the seasons with a thicker skin, as she has done the finger-ends and the soles of the feet.”