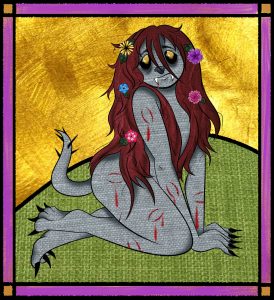 The anthra, while abundant in number, prefer to live alone, and they do not wear clothes because they are governed by the laws of nature over that of humanity. They travel by themselves through forests and plains, burrow in dusty caves to sleep during the day, and scavenge at night. With a tail of thorns and frightening yellow eyes that betray grief, the dog-like face of the anthra is one that appears to be constantly in pain. The body of every anthra is littered in bite marks from itself and other anthra alike it. Once an anthra dies, other anthra scent the rotting corpse and eat it. While terrifying to look at, humans have no reason to fear anthra. The anthra are too busy hating themselves to pay attention to the follies of humans. Perhaps the flowers adorning the hair of many of the anthra speak to them being misunderstood creatures…

Flowers crown the mane of the anthra sweet,

Scented to hide the tang of reeking blood

That follows from other anthra it eats,

Singular travels through forests at night

Each limb moved with the drudgery of shame,

Bad dreams which cause every anthra to bite

Itself, so it can remain in deep pain.

Yellow eyes gleam in the light of the moon

It prays to some god it will escape soon

From pain it has always to itself dealt.

Howling cries of these cannibals are heard

Moments before they cease speaking a word.

Inspired by this excerpt from Montaigne’s essay “Of Cannibals”:

“I conceive there is more barbarity in eating a man alive, than when he is dead; in tearing a body limb from limb by racks and torments, that is yet in perfect sense; in roasting it by degrees; in causing it to be bitten and worried by dogs and swine (as we have not only read, but lately seen, not amongst inveterate and mortal enemies, but among neighbours and fellow-citizens, and, which is worse, under colour of piety and religion), than to roast and eat him after he is dead.”