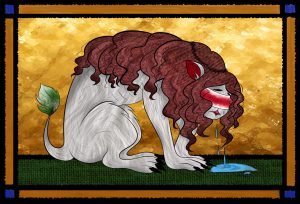 The flerea is the only creature of its kind. With the body of a dog and the ears of a bat, always unwillingly ready to listen for the cries of humankind, it stays in one place and cries eternally. Upon the hunched back it has lay the weight of every invisible burden of mankind, and on its head is a thin wreath of thorns. The flerea clawed out its eyes long ago because it could not stand crying constantly as it does from holding the grief of humanity upon and within itself, but even without eyes, tears still flow steadily from the empty, bloodied holes in its face and will until the end of time. It has soft skin which is unhardened to bearing itself to grief and sorrow, and the grief it carries oppresses the soul of the flerea to a disgusting degree.

It stood in the meadow sullen and sad,

As big bloody tears trickled down its face,

All matted and worn from years of the bad

The hunched up back of the flerea grew

Much more prominent, as time’s passage was

Causing human sins to fill it with rue.

Not a howl could emit from the dry

Throat of the flerea as it laid down

In distress, simply wishing it could die,

But it could not since humans were around.

Forever it shall build up grief and sin

And wish for a new life not to begin.

Inspired by this excerpt from Montaigne’s essay “Of Sorrow”:

“Neither is it in the height and greatest fury of the fit that we are in a condition to pour out our complaints or our amorous persuasions, the soul being at that time over-burdened, and labouring with profound thoughts; and the body dejected and languishing with desire; and thence it is that sometimes proceed those accidental impotencies that so unseasonably surprise the lover, and that frigidity which by the force of an immoderate ardour seizes him even in the very lap of fruition.”