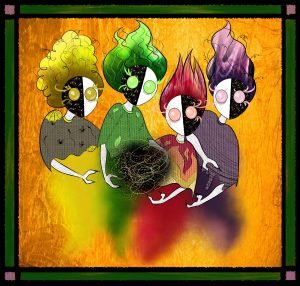 The moirai are ghost like creatures, only four in existence. They bring balance to the woods, taking into consideration the lives of humans and other animals living around. In charge of animals, plants, fire and natural disasters, they float in and out of sight like ghosts. No human has seen them for more than a second at a time, and when they appear, they all appear together, for the power of one moirai goes hand in hand with that of its sisters. Their faces are covered by half masks, which they switch around to try and fool each other with. The moirai are playful creatures, even though they often put negative, opposite things into forest areas where there needn’t be such. It is said that when they are seen, ambitious men are made envious, good men are made to be mean, and the sunniest days become storms because the moirai think it to be funny. They have seen too much life to care much for the simplistic good, so wrecking chaos has become a game to them which keeps them contented over centuries of observing a humanity they otherwise have little to do with. It annoys them that they cannot be seen for long, so they work through nature to make themselves known.

They floated through the dewy forest brush,

One drew a finger up to give a shush

As through the forest a human voice rung.

Moirai play games, none of which are too fun

It is not long before they are all done,

Leaving in their wake a discord and strife.

Chaos is rung in by fate-seeing ghosts

Glowing ethereal, they love to play.

They have been on this earth longer than most

With no need to save their games for the day.

All throughout the night they swoop from the skies

To terrorize humans before souls rise.

Inspired by this excerpt from Montaigne’s essay “All Things Have Their Season”:

“…he applied himself to this study, not for the service of his death; but, as a man whose sleeps were never disturbed in the importance of such a deliberation, he also, without choice or change, continued his studies with the other accustomary actions of his life. The night that he was denied the praetorship he spent in play; that wherein he was to die he spent in reading. The loss either of life or of office was all one to him.”