Sherrill Grace completed her graduate studies in English Literature at McGill University in 1974.   After three years teaching at McGill, she joined the English Department at The University of British Columbia in 1977.  She was appointed to the rank of Full Professor in 1987, and she served as Associate Dean of Arts for 3 years, as a UBC Senator for 9 years, and Head of the Department of English at UBC from 1997 to 2002. She was named an Officer of the Order of Canada in January 2014.

Professor Grace’s teaching and research interests lie in the areas of 20th century Canadian Literature and Culture, Drama, Biography and Autobiography, and Interdisciplinary Studies in the 20th Century Literature, Art, Film, Theatre, and Music.  She has published 200 articles and 19 books, including studies of Margaret Atwood, Malcolm Lowry,  Literary Expressionism, the 2 volume scholarly edition of Lowry’s letters: Sursum Corda!  The Collected Letters of Malcolm Lowry (1995, 1996), and she has co-edited a collection of Canadian plays called Staging the North and two books on Canadian theatre. Her book, Canada and the Idea of North, was published in 2002, and Inventing Tom Thomson appeared in 2004. Professor Grace’s recent published works also include a new edition of Mina Benson Hubbard’s A Woman’s Way Through Unknown Labrador (2004), a biography of Sharon Pollock entitled Making Theatre: A Life of Sharon Pollock (2008) and On the Art of Being Canadian (2009). Professor Grace presented a lecture entitled “The Haunting of Canadian Culture: From the Ghost of Tom Thompson to the Ghosts of Vimy Ridge” for the Vancouver Institute on March 5th of 2011, and on April 13th of 2002 “Ideas of North.”Professor Grace was the Brenda and David McLean Chair in Canadian Studies for 2003-2005.

Over the years, Professor Grace has received many research grants, including a Canada Council Killam Fellowship for 2004-2006.  She was appointed a Peter Wall Distinguished Scholar for 2003 and has been made a UBC Distinguished University Scholar. In 1991 she won the Killam Research Prize at UBC and in 1998 she was awarded the Jacob Biely Prize.In 1991 she was elected a Fellow of the Royal Society of Canada, served as President of Academy I of the Royal Society of Canada from 2004 to 2006.  She is a member of several professional associations such as the Association of Canadian Studies, the Canadian Association of American Studies, of which she is a past president, the Association of Canadian College and University Teachers of English, the Canadian Comparative Literature Association, the Modern Language Association, and the International Association of Professors of English. She was awarded the UBC Killam Teaching Prize for graduate teaching and supervision in 2006. In early 2008, Professor Grace was awarded the Killam Prize, Canada’s most distinguished annual awards for outstanding career achievements in engineering, natural sciences, humanities, social sciences and health sciences. (Photo: UBC President Stephen Toope, Sherrill Grace, Dean of Arts Nancy Gallini during reception in honour of Sherrill Grace.) In February 2011, she was awarded the distinguished title of University Killam Professor, the highest honour that the University of British Columbia can bestow. In 2013, she received the Queen Elizabeth II Diamond Jubilee Medal, an award that recognizes significant contributions by Canadians and permanent residents to Canada over the previous sixty years.

She has lectured widely in Canada and the United States, and in Germany, Italy, England, Belgium, France, China, Japan, Iceland, Norway and Austria. She continues to publish and give invited lectures and has just published her biography of Timothy Findley. 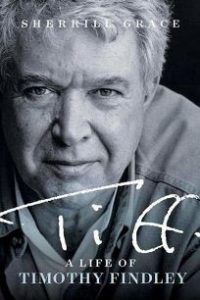