Our final task on this issue is to publish our concept map so that it can be compared with the on you developed on the concept page of this blog. Since this map was meant for us to compare the theories no attempt was made to have a single set of common elements. Instead these are shown in yellow in each theory on the map.   Click on the image below to view the full map. 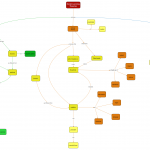 It is only natural for us to try to understand how the theories compare to each other since they all address the same thing in different ways. The table below is an attempt to show how they stack up against each other.

DECIDING AMONG THE THREE APPROACHES (Nardi 1995)

The activity theory and distributed cognition are very close in spirit has the richest framework for studies of context in its comprehensiveness and engagement with difficult issues of consciousness, intentionality, and history.

Situated action provided a much-needed corrective to the rationalistic accounts of human behavior from traditional cognitive science make it difficult to go beyond the particularities of the immediate situation for purposes of generalization and comparison have two key problems:

Distributed cognition has shown how detailed analyses that combine the formal and cognitive properties of artifacts with observations on how artifacts are used can lead to understandings useful for design.