Most of us are at least somewhat familiar with conservation efforts to protect iconic African megafauna such as elephants and rhinos from illegal poaching, or the triumphant return of sea otters to the British Columbia coast after they were reintroduced between 1969 and 1972 after being nearly hunted to extinction. These types of conservation efforts can often drum up lots of public support as most people tend to empathise with large, awe inspiring animals and cute, cuddly species that they may have seen at the zoo or on nature programs on T.V. 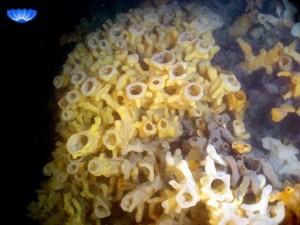 Most people probably wouldn’t think of glass sponges as particularly iconic, cute or charismatic, yet many British Columbians are unaware that these prehistoric species, which were once thought to be extinct, form extremely unique reefs right in their backyard: in the depths of Howe Sound.

What is a glass sponge?

Glass sponges are filter feeding organisms with a skeletal structure made almost entirely out of glass (silicone dioxide), and form unique reef habitats up to several hundred meters under the surface of the sea. Glass sponges are only found in four locations worldwide, and were once thought to be extinct until they were discovered here in the 1980’s. British Columbia is the only place in the world where these sponges form reef habitats. The structures they create are important habitat for many species of the Pacific, including rockfish and other invertebrates.   Not unlike their tropical counterparts however, sponge reefs are extremely vulnerable to physical damage from trawling as well as sedimentation.

In 2010 Canada listed the larger sponge reefs in Hecate straight as “areas of interest” for marine protected areas, however smaller reefs in the Straight of Georgia remain unprotected and largely vulnerable to human impacts in the region. 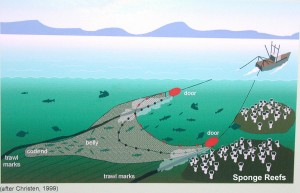 Illustration of how trawling on the B.C. coast has the potential to decimate glass sponge reefs. (photo courtesy: mareco.org)

Conservation efforts are mobilizing to try and protect these smaller reefs, however gathering public support for conservation of these habitats may be difficult, as most people will never even see these species in person.

Why should they be protected?

They may not be entirely iconic or cute species, but glass sponge reefs represent a vulnerable yet important, unique and prehistoric habitat that is distinctly unique to British Columbia. Shouldn’t these reasons be enough to conserve our glass sponge reefs?