The most sparkly news we’ve heard in a while is definitely THE RETURN OF THE JOHANNES. He is running for President and that means…that if he wins, he’ll be back on AMS Council. Be still, our hearts.

There’s currently some baby scandal occurring, because he’s not allowed to campaign for the next 24 hours, according to a Facebook message we got. Whatever, we are jumping the gun and officially endorsing Johannes for CUS President. Because Johannes is the best. In fact, he is so amazing and Confidential loves him soo much (possibly more than our uber-crush Guvna Sean Heisler) that we compiled a list.

1. We endorsed him last year for Senate. He was also the VP Academic for the AMS. He knows what he’s doing, and he’s a sexy bitch. Plus, it’d be really great to have another former exec back on council, for some sanity.

2. He was the favourite choice of our AMS Prince Charming guide. We can’t ignore the voters!

5. He likes Pedobear. This is him at the Anime Convention last year.

6. HIS WEBSITE IS THE GREATEST THING EVER. Besides having a great theme which makes him look like the most! fun! person! ever!, he also uses TUMBLR and FOURSQUARE for his CAMPAIGN. [Editor’s Note: Taylor is a huge social media geek and thinks this is the greatest thing since sliced bread. She is weird.]

7. This video. (special appearance by Ben Cappellacci too!)

8. He is a musician, and plays the electric violin. No, we’re not joking. Yes, he’s the perfect man. Listen here. Oh, and he was in a band once upon a time.

10. Look at him. He is just seriously so, so, cute. VOTE JOHANNES FOR PRESIDENT. 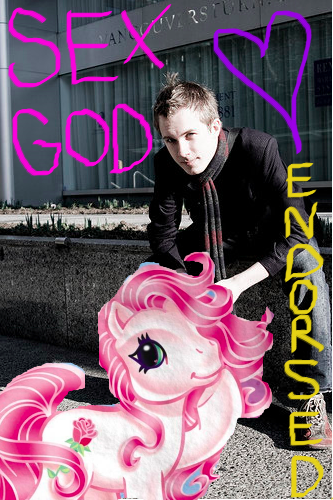 6 thoughts on “This is Why He’s Hawt”