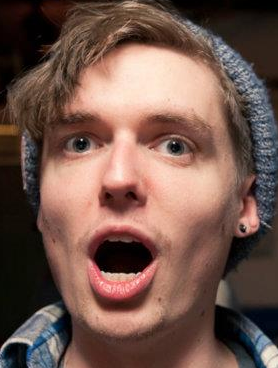 This is Bryce's EXCITEMENT FACE

Bryce Warnes was reared in the piny wilderness of Vancouver Island. SKILLS: Cussing, wrastling (“mountain style” only), dream-travel, haiku. WEAKNESSES: Hard liquor, pretty mouths.
Warnes’s three years at UBC have painted him with a thin veneer of civility. But while he wears the garb and apes the speech of city folk, he is at heart a savage and recalcitrant creature.
As per the request of his caretaker/trainer, AMS Confidential is allowing Warnes the opportunity to publicly form his thoughts into human words.