1) The coverage of the carbon policy. Discuss the sectors/fuels covered. Discuss, what sectors/ carbon equivalent emissions are exempted. How does the policy implement over time? Use the information about the policy’s coverage to inform an evaluation of the cost-effectiveness of the policy

2) Discuss distributional effects of the policy. One of the primary concerns around a carbon policy is that by raising the price of energy it disproportionately impacts the poor. How do these policies address such distributional concerns?

What carbon tax is

A carbon tax is a price mechanism which requires the fixed payment for every tone of carbon emitted. The fixed financial incentive is guaranteed by the tax for carbon emission.

During the late 1980’s, the Danish Environment Agency had been pursuing environmental taxation. Parliament reached a consensus on using the environmental taxation on household energy consumption as a way to generate revenues to enable a reduction in existing energy tax. Denmark’s carbon tax was passed in 1991. In 1992, carbon tax was added to existing energy tax on coal, oil, gas and electricity. The tax was firstly imposed on carbon emissions by households in May 1992 and the tax system was expanded to include industry in 1993.

There are 4 main goals:

3) As an incentive tax, encourage Danish enterprises to be away from carbon and toward into environmental innovation

Since 1992, households have been charged $7.50. Firms had been charged $14.30 per ton of CO2 emitted since 1993. However, tax rate was decreased by approximately 50cents in 2005. A carbon tax is imposed on the top of existing energy tax. In order to keep the efficient tax rate, the government decreased energy tax level when carbon tax was established. But, it was increased in 2005 as carbon tax was decreased. Rather than collecting the tax revenue for the government budget, 40% of tax revenue is used for environmental subsidies and 60% is returned to industry. The government also offers 25% reduction of the tax to the company which signs an energy savings agreement with the Ministry of Transportation and Energy. 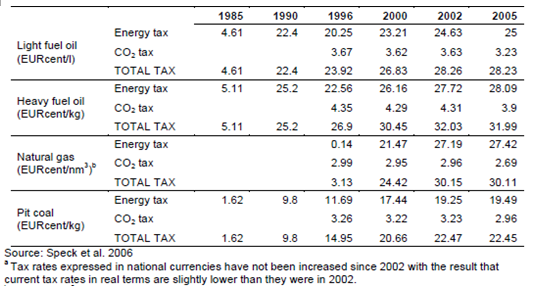 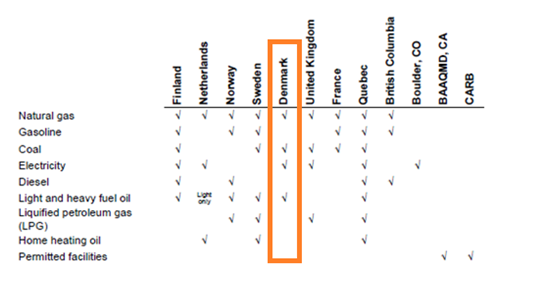 The policy could lead a huge decrease in carbon emissions. Per capita emission of carbon was reduced by 25% between 1990 and 2005. Industrial carbon emissions were also dropped by 23% during the 1990s after enterprises were induced to do industrial restructuring by a carbon tax. In addition, a high level of annual revenue was generated. There were $485.7million in 1994, $585.5million in 1995 and $905 million in 2008. Since after the tax was introduced, carbon emissions have been decreasing and revenues have been increasing.

As mentioned earlier, 40% of the tax revenue is used for as environmental subsidy and the other 60% is returned to industry. So, based on total annual revenue of $905 million in 2008, $362 million were offered as environmental subsidy and $548million were returned to industry. However, there are exemptions including fuels for sea-borne carriage, air transport, electricity and gas. They are combined with a tax refund scheme based on reports on enterprises’ energy consumption, VAT payments and VAT reporting. The scheme ensures that electricity production from natural gas and renewable energy sources is not overtaxed.

Denmark’s carbon policy is very cost-effective. Due to the tax policy, it is easy and incurs low cost for Danish firms to switch to use alternative energy source which can reduce carbon emission. Policy makers provides firms a subsidy for environmental innovation and huge investments in renewable energy by using carbon tax revenue. The government also returns 60% of revenue to industries. With signing saving energy agreement with Ministry of Transportation and Energy, tax rate can be decreased by 25%. As the tax policy covers many sectors of natural gas, coal, electricity and light and heavy fuel oil, the policy successfully reduces carbon emission levels. Personal carbon emission levels were reduced by 25% and industrial carbon emissions were  dropped by 23% between 1990 and 2005. High benefits can be created by relatively low cost carbon tax policy.

As climate change has been an issue, many countries already have a carbon policy, which is either tax or cap and trade, and some countries intend to have one to reduce carbon emission. I strongly believe that Denmark’s carbon tax policy can be used as a benchmark. Transparency of tax revenue distribution is high because the revenue is given to industry as a form of subsidy and investment for renewable energy and environmental innovation. The government gives industry an option to pay only 25% reduced tax and reduces energy tax to address concerns about the impact of carbon tax on business. And the most important reason I recommend other countries to follow Denmark’s policy is that its carbon tax efficiently reduces a huge significant level of carbon emissions. I can’t tell that imposition of carbon tax is always more successful than cap and trade or vice versa. It really depends on situations countries face. In Denmark, carbon tax policy is successful. I think that combined price and quantity mechanisms could be also an optimal solution in case that businesses oppose carbon taxes because of the transfer of revenue to the government and environmental groups oppose carbon taxes because of possibility of failure to guarantee a particular emission level unlike a permit system.